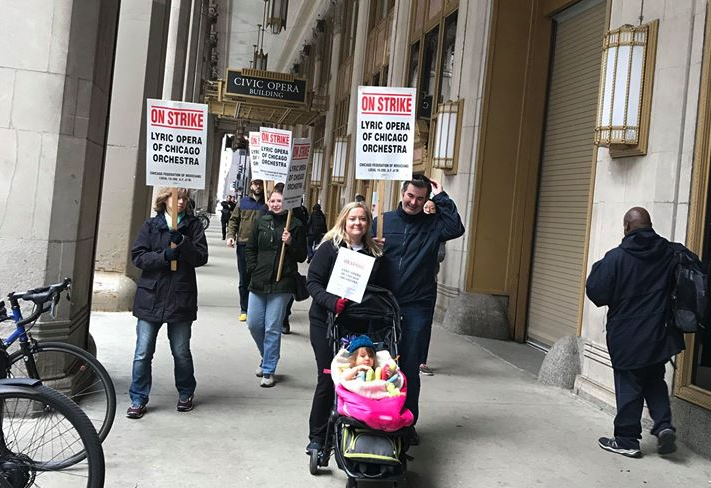 Lyric Opera Orchestra is Having a Worker’s Moment, But What Does it Mean for Labour Movements on the Whole?

I’ve now written two objective pieces covering the details of the Orchestra Strike over at the Lyric Opera this week, you can find those here and here, but this is going to be something a little different.

There is no doubt that the Lyric Opera Orchestra is having a strong showing of labor power and the ability to wield a narrative in their favor. Their first press release was clear, they gave frank salary numbers and directly critiqued the Lyric’s proposals.

The Lyric responded in kind, you can read the full response here, but basically, the Lyric feels that to their metric, the take home pay is more than fair compared to other markets.

“Under the new contract proposal, Lyric is offering average annual take home wages of $82,500 per orchestra member for 22 weeks of work and 20 hours of work per week,” the release reads. “Any work over 20 hours per week is paid as overtime.”

The Lyric then use a (in my personal opinion) condescending FACT: format that obscures their ultimate second point, that their added musical programming has changed the composition of their ticket revenue. To the Lyric, while the orchestra is correct in saying that ticket sales have raised, it’s not because of their traditional programming.

The classical music specific outlet Slipped Disc has gone to great detail in covering each and every update from the strike, especially from the musician’s perspective, and published a significant amount of the Orchestra’s response to the Lyric’s claims.

“Anthony Freud’s calculation of $82,500 per orchestra member for Lyric’s settlement offer has been inflated far above the base scale for any musician,” the orchestra said. “Lyric has proposed a three-year agreement (22 weeks each season) with increases of 3%, 1%, and 1%. The base scale for each of these seasons including an electronic media guarantee of $1,000 is $71,295, $71,998, and $72,708. These amounts are nowhere near the $82,500 quoted by Freud. To attach the phrase ‘per orchestra member’ to that over-inflated dollar amount is simply false.”

They then point out that the “20 hours of work per week” only references the hours spent in the Opera House. As any musician can tell you, this is a fair piece of information to point out, as Orchestra Members are expected to work far more hours on their own time on repertoire at home or elsewhere.

The piece that both sides seem to mention only when otherwise neglected are the other two unions that work with the Lyric Opera. The American Guild of Musical Artists (AGMA) and the International Alliance of Theatrical Stage Employees (IATSE) represent the chorus members and the stage crew respectively, the Lyric has brought up their coming to an agreement frequently as a tool to shame the orchestra, and the orchestra has responded by barely mentioning them.

“Regarding IATSE and AGMA settling contracts: We can’t speak for them and certainly weren’t present in their negotiations,” the orchestra said. “What matters is what we, the orchestra, are fighting for.”

The sad reality of this is that while undisclosed, the agreements the other two unions have come to are likely worse than what the orchestra has declined. The difference is that AGMA and IATSE represent more part-time and by-show workers, meaning that those workers need the income more for their day-to-day expenses.

The idea behind union organizing is that unions should be inherently collaborative. A specific union can petition and organize for their specific needs, but in many scenarios, sectarianism can provide battleground for larger powers to benefit. The Lyric is currently benefiting from this with regards to the Chicago Federation of Musicians (the orchestra’s union) not having effectively organized with the other two Lyric unions.

The Orchestra also finds itself in a major turning point in local politics. The recent Van Dyke verdict, although not something many organizers are satisfied with, marks a turning point in the long path toward not seeing another innocent black person murdered by the police.

This is in every way due to the power of local organizing, as the city police would have otherwise kept the dashcam footage of Laquan McDonald’s murder under wraps. The Orchestra has not commented on this in the slightest.

Maybe that’s a little too far out of the Orchestra’s mission, but what about other Chicago city workers on strike? The Hyatt workers won their 4-week strike last week, again showing the power of local organizing. According to In These Times,

“Twenty-eight days into the largest hotel strike Chicago has seen in a century, about 1,000 workers with UNITE HERE Local 1 have won a new contract at the Hyatt—the last major holdout after several other hotels in the city already settled with the union in recent weeks.”

The strike was resolved hours after Third Coast International Audio Festival (TCIAF)—a small arts nonprofit based in Chicago—made the difficult decision to move their annual conference out of the Hyatt Regency McCormick Place the night before it was set to begin.

All this said, labor movements are intensely complicated and Scapi Magazine stands with workers by default. I, and the Magazine at large, feel this strike specifically provides an opportunity to talk about workers rights in this city and the country at large, and we hope that the Orchestra strike feels the same way.