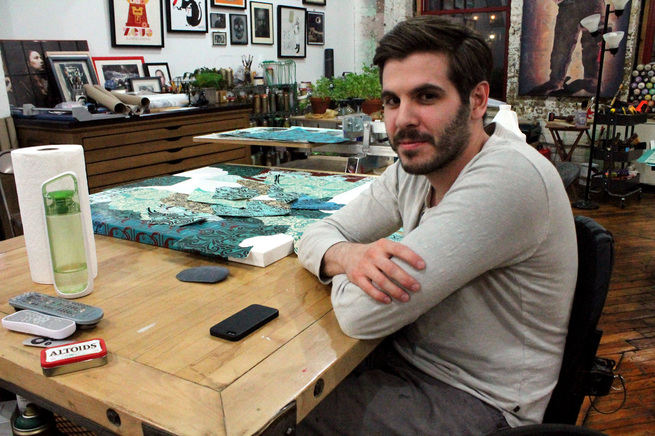 A Streetlight Manifesto: A Conversation with B.D. White

Stencil artist B.D. White has spent the last few years literally putting his stamp on New York City.
His work is quickly becoming a visual staple in his adopted Williamsburg neighborhood, but White was on a decidedly different path when he first moved to New York to pursue art about 4 years ago.

White said he was making oil brush paintings and still experimenting with what creative styles he liked best when Banksy’s film “Exit Through the Gift Shop” changed everything.

“I saw the documentary and it kind of really opened my eyes,” he said.  “I didn’t realize there was this movement of people putting like actual artwork on the street that wasn’t just graffiti, you know? And so, I thought, ‘I really wanna try that.’”
White insists he isn’t anti-gallery; he said just wanted to “go around” them, since he just doesn’t want the whole of his career to hinge on selling himself to these institutions.

“Galleries, you know, they’re business,” he said. “They’re not going to look at you or talk to you unless they can sell your work.  Art is an extremely luxury item, and no one buys it unless they think it’s going to be worth money.”

“That’s why I like street art,” he continued. “Anonymous art is finally appreciated.”
Below is the entire gallery of photos from Jennifer-Leigh Oprihory’s session with B.D White. You can also see more of her work on her website or her Instagram.