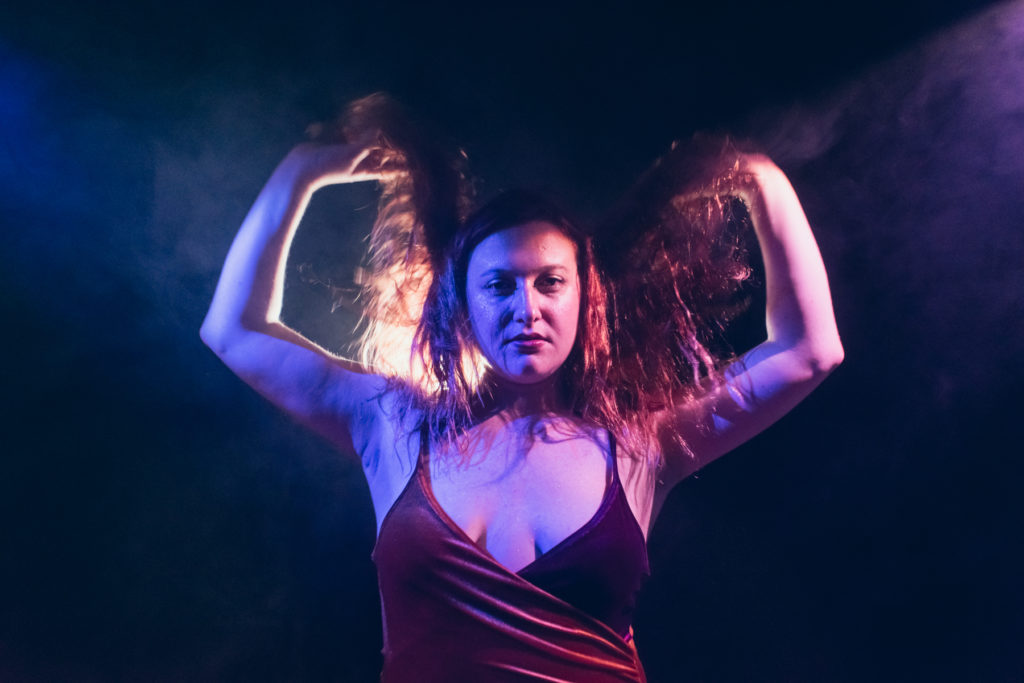 I See The Sparkling: A Profile of Photographer Matthew Gregory Holis

Before my photoshoot, photographer Matthew Gregory Holis and I talked about our romantic relationships and traveling to different parts of the world, all while drinking some apple brandy I brought as an exchange for his art.

He put some David Bowie while I picked out my first outfit for the shoot. The music shifted to PJ Harvey while he set up the flashlights.

“There’s no wrong answer,” Holis told me as I tried to find a comfortable pose. “If there’s any kind of pose you wanna do, let me know.”

I told him I like to be led, but I also liked to make suggestions, that I liked to figure things out as they go.

And my hope was to use the fog machine.

Matthew Gregory Holis has been a photographer for 20 years, and his process has always been iterative.

He has taken photos for Synapse Arts Collective, a Chicago-based performance group that utilizes a laboratory approach to creating new dance and dance-theater works. He also took promotional images for a performance titled Ash/leigh.

“The performance was as haunting and disturbing as the pics turned out,” Holis said of the experience. “It was awesome!”

He’s also photographed for various dance and theater companies around Chicago, including The Inconvenience’s Fly Honey Show, an evening of cabaret-style performances brought together to inspire desire and celebrate the skin people are in.

The Flashlight Project started in the fall of 2017. Holis invited anyone with a creative spirit to join him in his studio and trade “time” for “prints.”

“I’m more interested in getting together and improvising some ideas,” Holis said. “Half the fun is making it up as we go. It’ll be fun!”

Holis was first entranced by a friend’s dance performance that was entirely lit by flashlight. He photographed the performance and was stunned by how the pictures turned out. The flashlights were small and produced a large amount of light on the five people moving on stage. It didn’t initially occur to him that it was something he could use in his own photography work until he saw an article about fashion photographer Paolo Roversi, who used giant, magazine lights to “paint the models.”

“l looked at his work and thought, it’s beautiful, it’s crude and it’s rough,” Holis said. “Those are the things that appeal to me in other people’s photography.”

Combining Roversi’s idea to use lights with the efficient and inexpensive idea to use LED lights based on the dancers’ performance, Holis started the Flashlight Project. Now, he has eight different LED lights for different purposes. Sometimes, he puts colored gels on them to emphasize and get color on a certain part of the photo.

“My philosophy was thinking that if I’m using a basic tool, like a flashlight, then I would use simple things that I can find around the house,” Holis said.

He found liquor bottles to use, forks and spatulas, dead flowers, and Christmas ornaments. Everything that was found around the house was an experiment, an opportunity. Sometimes, as he did the photoshoots, he was reminded of the scrappy and experimental theater scene of the 1980’s, making art out of limited resources in a black box and allowing others to have full use of their imaginations.

“A little bit off is great,” Holis told me as he snapped more photos. “Feel it in your eyes. That’s great. Good good good. I see the sparkling!”

He was so encouraging. We stopped for a moment so we could take a look at the photos. I was admittedly nervous to see them; I had a knack for making the strangest expression in photos when I was at all distressed. But I looked onto his camera screen and gasped. I thanked him for making me look beautiful.

“That is you, my friend!” he said cheerfully, and without skipping a beat, pointed to one particular photo. “Let’s play a little more with that, in and out of that light. This thing produces a weird light and it shows a new way. Good, yes, good.”

I felt more comfortable after seeing the first batch of photos. As I switched from position to pose, I asked him about the music he was playing for us, about his first musical experiences.

“The very first concert I ever paid to go see was Bjork’s band,” he said to me, then shifted gears. “Move forward just a little bit… Yeah good! Turn your body.”

And another photo was snapped.

He put his camera down momentarily and began to tape colors onto the light.

“It may not work,” he said to me and grinned. “It’s always an experiment. Most of the time they fail.”

Holis distinctly remembers an episode of Growing Pains with Kirk Cameron; it was about the time he was finishing high school himself. In the show, Cameron was taking a college course for the first time, and him and his friend chose a photography course because they were required to work with a nude model. After working with a nude model for an assignment, Cameron realized that he didn’t bring her in to work with him for the right reasons. He paid her the money he promised and instead photographed himself in the nude.

Ten minutes after the show ended, Holis was digging out his sister’s camera.

“And that was the beginning of the end!” he said with a laugh.

Holis moved to Chicago in 2000 from Oxford, Ohio, to study at the Art Institute for a graduate degree in photography. He remembers being heavily influenced by his teacher Robert Karpay, who defined the photographer as someone who chose to be confined by a certain discipline.

“I love that idea,” Holis said. “Photography is what I do, it’s what I love. Sometimes, [the graduate program] encouraged me to make videos. I’m not a videographer. I take still images, fragments and seconds.”

During his graduate career, Holis did a series of photographs that were based on Film Noir movies, so they were all black and white. In his research on the films, he found that the artists making the films often lacked funds and made do with what they had, which resulted in much of the simplicity and bareness found in the Film Noir style.

“It’s made Film Noir movies so dramatic and beautiful in a way,” he said. “I imagine they said, ‘we’ve just got enough money for this one light, so let’s try to light this whole room with it or not!’”

When Holis works with folks on photography projects, he prefers not to get paid. He’d rather exchange time for prints.

“People are making art for money now that seems crazy to me,” Holis said. “I need money to survive. I don’t need it to make art.”

If he’s working with a larger company that has the capacity and the insistence to pay him, he’ll accept the pay, but will never turn someone away for lack of funds.

Perhaps unknowingly, but Holis’s kindness and generosity creates opportunity for theater and performance artists to have prints, to have photos in a very accessible way. I mentioned that from my own experience, his camaraderie was delightful and he was so very easy to work with. He brought out certain elements of my own artistry, particularly dance and physical theater, that I had thought were long abandoned.

“I love photographing dancers, because they understand the process better than anybody,” Holis mentioned. “Because it’s a constant process for them.”

As for continuing the Flashlight Project, Holsi says he doesn’t see it ending anytime soon, but would be open to finding a new idea once he feels the project has run its course.

“And hopefully in this process,” he said with a smile, “I’ll find the next thing that comes along.”