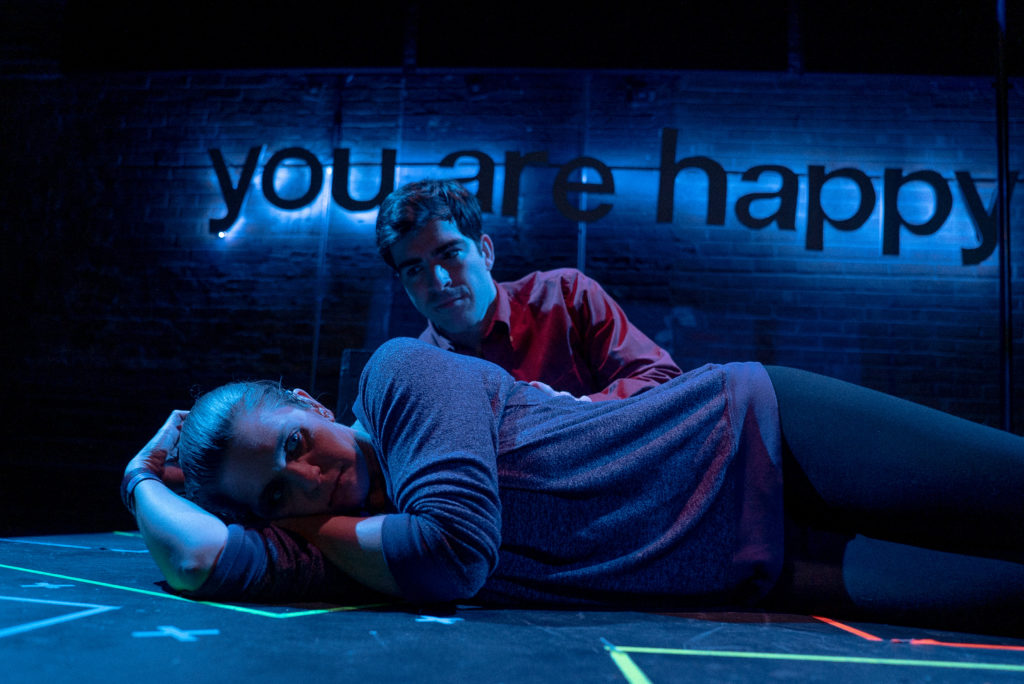 You Are Happy at Red Theater is simply a special show. From the work that went into translating it from French, to English, to American Sign Language, and back to English, to the character depth that comes with the paired-up Deaf and hearing actors, to the minimalist approach to the space and the powerful message it conveys.

You Are Happy is a fantastic piece of theatre. Instead of my telling it, however, I was lucky enough to learn more about the show from a handful of wonderful production members. The things I learned about Red Theater and the initiatives that it takes to create an accessible performance space for theatre artists and viewers were eye-opening. I wanted to embrace this initiative by passing the interview over to one of the show’s leading performers.

Michelle Mary Schaefer plays Chloe in the translated Rébecca Déraspe play You Are Happy. She is a Deaf actress, director, writer, and an ASL Master who has worked across multiple platforms of the theatre industry. Schaefer was kind enough to dive into a handful of questions that Scapi Magazine wanted to know more about.

Scapi Magazine: Let’s revisit the Chloe we first meet. Where does Chloe’s confidence and sense of self stem from?

Michelle Mary Schaefer: Chloe is a wonderful gal who unfortunately thinks of others before herself. She is a people-pleaser. She doesn’t like to make people mad, or insult people. Of course, Chloe is a human with feelings as she has issues with love; her own grandmother never loved her. She longs for love but cannot connect with anyone; hearing guys just want to sleep with her as one-night stand. But them she meets a Deaf one; she meets Jeremy and all of that changes as they communicate and connect… Prior to Chloe meeting Jeremy, she hopes that he is hot, nice, and all that so she can actually be in relationship and feel loved. A normal person would call the cops on a random strange guy in your apartment but Chloe didn’t, just because he was cute. Charming Jeremy could have been Ted Bundy…

Throughout the relationship, she recognizes the signs of it being unhealthy, but feels trapped as she didn’t have the support she needed from Bridget and couldn’t tell her friends about the relationship. So, she chooses Jeremy, and chooses to take the burden of his suicidal behavior upon herself. Chloe needed to set up a better and even more stronger boundaries and respect for herself. [For example,] the scene in which Jeremy wants to have sex with Chloe and she wanted to wait. Moments later, Jeremy said “I love you” and it kind of forces Chloe to have sex with him. It wasn’t the right time; even though she loves sex, it truly wasn’t a real “I love you.” It was more like “I said, I love you, now you owe me sex; I deserve it.”

A lot of scenes within the play hit a familiar place [in regards to] my past relationship. I feel that it’s an important piece that [shows the difference between] healthy love and abuse… Overall, Chloe is a great gal, and she deserves better; her dreams, her passions, her love life. [She] needs to learn to love herself before she can truly love anyone.

SM: The layers of actors allowed for us to see the inner monologue/undercurrent for each character – a luxury that one doesn’t often get when seeing a character cast with only one person. Sometimes the way the actor was portraying an emotion was different than how their voiced actor portrayed the line. What kind of impact does this have on the overall telling of the story?

MMS: It’s pretty awesome how Sarah Shoemaker [as my voice] is the subconscious of Chloe.  She is there for Chloe, to speak in whatever way the subconscious would feel [in a given situation]. [For example,] she may disagree with what Chloe is doing in a scene, and that affects her voice. Other times the voices, the signs, the moods, and the actions all match. That’s what I loved about this, and especially working with the talented Sarah.

MMS: …To Jeremy, “love” is doing and saying things, trapping Chloe to [make her] believe that he truly loves her. Really, he has chained Chloe in his power to make Chloe think that is really love. Love [in the context of the show] is male power over women, that women are always wrong. Like, when Jeremy got upset over being out of soap and blames Chloe. Why can’t he just go out himself? Why does Chloe have to accept the blame, which she didn’t [accept] for a second but how often did that happen behind scenes within the relationship?  Very often! Jeremy forces Chloe to fight two to three times a week because he believes that fighting is “healthy”, which it isn’t. The “love” and the “relationship” between Chloe and Jeremy an abusive one, mentally, emotionally, and physically. It’s even [an example of] gas-lighting, which leaves the victims (like Chloe) trapped, clueless and not able to escape. Per the National Coalition Against Domestic Violence, on average nearly 20 people per minute are physically abused by an intimate partner in the US. During one year, this equates to more than 10 million women and men, and 72% of all murder/suicide involve an intimate partner; 94% of the victim’s of these murder suicides are female.

SM: Why is it so important for others to provide love instead of Jeremy finding it himself?

MMS: In my view, Jeremy is christian, white, male, heterosexual, and Deaf; he has the majority of social privileges and yet [still receives] pity due to his Deafness and his struggle through mental health, which he often puts upon on the women in his life. He is used to…letting everyone take care of his problem, like his parents, his sister, and the women he dates. It’s a mind game (an abusive one) that he is used to playing. He allows his privilege…to take care of him in life. He is lazy, not caring about himself, but puts blames and pressure upon others including getting LOVE, not taking care of his mental health… Some men are ashamed of their mental health and blame women for it. Now, his sister, Bridget (who is hearing) grew up watching her brother’s struggle… She just wants to see Jeremy happy, successful, in love, married and have kids fitting in the society norms while she knows she is messed up herself but can fix her brother to the best ability.

SM: Throughout the play, nobody mentions Jeremy getting help for his aggression, self-harm tendencies, and narcissism. Why is Bridget’s solution to pass him along to another girlfriend instead of getting him professional help?

MMS: Mental health is an issue especially nowadays a taboo. It’s sad, but a true narcissist always find a way within society, and finds new victims (as Jeremy did) rather than addressing his own issues. Bridget should have stood up and be an advocate for women, but again Bridget has tons of issues with herself, and learns how her mother raised Jeremy with full of pity and excuses.  Allowing Jeremy’s privilege and looks to be excusable for his behavior, mental health, laziness, lack of commitment and being late, which it has been a pattern passed upon on Bridget. Bridget would eventually have to be stronger, break away from her habits, and recognize what is healthy and what is not instead of gas lighting others, trapping the victims in the game of abuse.

SM: The women in this play function more stably without a partner in their lives, be it romantic or familial. The man, on the other hand, seems to function better with a partner. Any thoughts or comments?

MMS: “Some men simply cannot live without women”, as Hannah in Sarah Treem’s play When We Were Young and Unafraid mentions… Even though that play takes place in the 1970’s, it’s still happening nowadays… Women are always [depicted] cooking, cleaning, shopping, providing men with [basic wants and] needs such as sex, doing everything on their terms and if we speak up or stand up to them we end up [dealing with the] consequences… You see old TV shows with how women took care of men, after they come home from work and all that. Now, women are speaking up, standing up to [all of these] unresolved mental health issues in men, [making it clear that they] are not excused from their poor actions. Women will never be equal with men if we are always forced to take care of them… One guy told me that women cannot take care of women because it’s a man’s duty, their responsibility since they can provide everything for a woman. Meanwhile, two women can’t [do that], especially in a lesbain relationship. That was the most offensive thing I ever heard! It shows how brainwashed society. As a single woman, I am perfectly capable of taking care of myself; I am strong and independent, and never lower my standards because I’m worthy.

Red Theater honors all audiences by asking dangerous questions theatrically. Their #FreeTheater initiative and commitment to Accessibility in every production lowers the barrier for nontraditional audiences to see new works that challenge the status quo. You Are Happy runs through December 8, Thursdays through Saturdays at 7:30PM, Sundays at 3:00PM. Tickets can be purchased in advance by clicking here. To learn about the company and their commitment to their #AccessInitiative, visit their website.

Published in Impressions and Theater