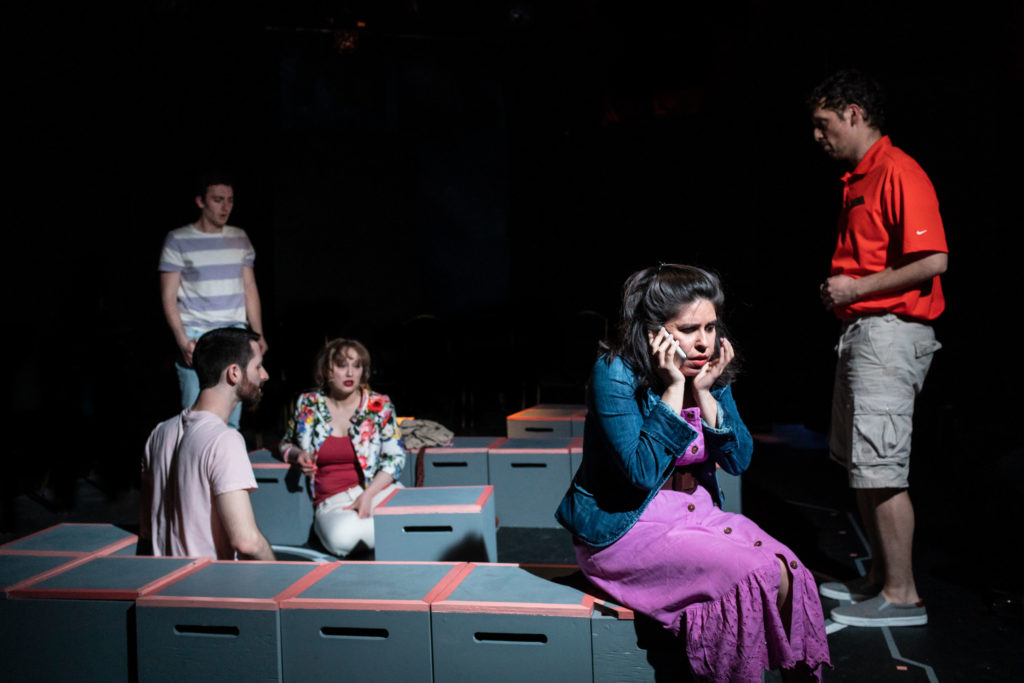 Technique and Craft: A Profile of Bec Willett

Bec Willett (artistic director of Bower Theater Ensemble) moved to Chicago from Queensland, Australia, after her husband was relocated in his job. Ironic to a woman running a theater company based around inclusivity and cross-genre expression, Bec joked that when she first arrived to Chicago, she was given weird looks for having a degree titled ‘technical’. She explained that where she is from, there were two ways to study for a drama degree.

“There was one, you’re an ACTOR, all you wanna do is act, which is a fine arts acting program,” Bec explained, as I sweated flashbacks of my undergraduate degree. “And then there’s one that is theater studies, the one I did, and you do a bit of everything.”

While she graduated with her degree in technical drama in 2003, the segmentation and hierarchy between Acting, acting, and all other theatrical trades is eerily similar to what I’ve experienced in my recent years of undergrad at Columbia. (Also eerily similar to the reference between ‘animals’ and ‘Animals’ in the critically acclaimed book Wicked by Gregory Maguire— maybe that was an allegory for art school.)

Willett continued, “I got a chance to act in different productions, we took theater history, we did a tech class, I did a scenic design class…oddly enough, I never took a directing class.”

And in a fit of representation, I explode.

The woman who successfully started and operates her own theater company has taken one directing workshop. This is wonderful!

Do not be confused–Willett’s talent for directing shines through quite consciously, especially in the realm of who she chooses to work with. In Bower Theater Ensemble’s most recent show, Please Excuse My Dear Aunt Sally, one cast member made his scripted debut coming from the world of improv. Bec herself will have coffee with anyone wanting to chat. Or, if you hop on Bower’s website; there is a clear-cut ‘work with us’ tab, and their mission statement could inspire a TED talk. A breath of fresh air from the stale world of elitist theater.

In essence, Willett’s directing skills came from years post-technical training. She went back to school for a teaching degree, became a Drama Coordinator at WestSide Christian College, and was head of that drama department for six years.

“I would say that 80% of what I know about theater has come because when I was teacher, I would decided what I wanted to teach about. Because of that, I had to learn about it for myself,” Bec said. “[I thought,] I’m going to put it in the curriculum so I have to learn about it, and that’s mostly what made me learn.”

Similarly, I would say that 80% of what I know about theater has come from external reading and observation. Not to mention that 80% of my ‘special skills’ do not come from a class I paid to take, but from life situations that have formed me to be who I am. Simply put, I was not raised in a household that could afford it. But there are so many parts to me that were never at cash value and I still hold these parts to be skills.

Theater is a representation of society and life, so what purpose does elitism serve? Maybe a resume should be filled with the ways you have lived, money or no.

During her time as a teacher, Bec directed students on challenging shows like Mother Courage and Her Children and Much Ado.., who rose to the occasion of text and concept.

“Teenagers deserve way more credit than they get,” Willett said. “They are so smart. So smart. I still think about some of the things that they did.”

“I didn’t do much directing, but I got to be in the room,” Willett said. “More than anything, I could see why he was making those choices, but I recognized what choices I would make also… So it was really a reaffirming position of oh, I know what I’m doing.”

Those ‘oh, I know what I’m doing’ moments can really reinforce you’ve got taste in a subject. Willett told me: where I comes from, if you know how to learn, you can accomplish anything. Helpful tip: she also shared that most libraries carry audio recordings of plays, if you cannot afford to go see one.

When you’re a baby artist, before you have those ‘oh, I know what I’m doing’ moments it’s easy to get so bogged down about who will give you work that you end up forgetting to set boundaries about what kind of work is of value to you or the community, and what you’re interested in.

Bec Willett asked me if I was a director. I said no, I kind of act.

This is kind. However, the ‘kind of’ is a mix of burnout and stepping away to heal. When I started pursuing acting I was 18, ignorant, eager, and wheeling around baggage.

In school, part of my own baby-actor-ignorance meant I took on unsafe projects and looked up to professors like they were geniuses. I falsely assumed they had my best interests in mind. This was impossible, as I  didn’t even have them in mind. Sometimes in rehearsal or exercises I ended up hurt and I couldn’t figure out why. I didn’t verbalize boundaries, because I didn’t realize that was an option. I thought, ‘I must be a bad actor, no one else is having any problems with this exercise–why is it making me want to cry?’ But no one else has been through what I have, or the next person or the next, and people aren’t mind readers for other people’s trauma.

Willett agreed. In co-founding Bower, Willett and her husband dedicated their mission to technology-driven work in order to appeal to audiences inside and outside Chicago’s theater community, to encourage cross-collaboration between all aspects of production, and to encourage inclusivity regardless of a person’s background.

Bower’s most recent show, Please Excuse My Dear Aunt Sally (PEMDAS), followed a teacher-student relationship which bred from emotional security between cell phone interactions. Three Bower ensemble members played the single character of the cell phone. The play took the modern pursuit of affection through cell phone conversation and met it with Greek-chorus-verse to personify society’s addiction to our devices in true search of each other.

Willett and I talked a bit about the psychology behind a student-teacher relationship, and the psychology behind modern-day relationships developed mostly in phone conversation. Communication plays a large part behind the scenes at Bower as well; in each rehearsal, Willett takes time to check in on her ensemble’s mental status and offer open communication to what is weighing on them that day. Especially for shows with any kind of intimacy (like PEMDAS), Willett noted the importance of check-ins and boundaries to a safe, inclusive environment.

“A bunch of really talented, wonderful human beings decided this unconventional, highly specific and challenging roller-coaster of a play (which, let’s be real, through my script division made it even more complex) was worth it and they put their all into it,” Willett wrote on the closing of PEMDAS. “Not to mention that many of these folks were in their roles for the first time. The technique and craft and ingenuity of this show is a testament to them, their work and proof of what we can do when we come together.”

Please Excuse My Dear Aunt Sally (PEMDAS) closed May 25. Up next at Bower Theatre Ensemble is Neighborhood 3: Requisition of Doom, which opens October 18 at Otherworld Theatre, 3914 North Clark Street.