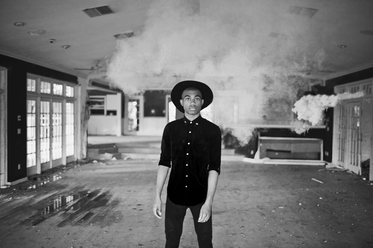 
The process that turns an idea into something consumable by an audience seems to be in constant flux. As artists continue to adjust to the changes in publication, the distance between artist and audience is shortening every day.

One shining example of this is Orlando-based recording artist Gabriel Brown. This week saw the self-release of his second single, “Hand in Hand” on Soundcloud.

“I’ve known I’ve wanted to work as a recording artist ever since I was little,” Brown said. “I was always heavily involved in self creation, and the cheap recording programs on my computer really came in handy. I was a very tech savvy kid because my dad worked in the military as an IT guy, so it wasn’t hard to record myself and get things rolling.”

This trend isn’t uncommon in this day and age. The accessibility of technology allows for inspiration to come at the touch of a button.

“I honestly think the ability to record my own demos, write my own songs, make my own graphics, edit my own videos, etc, is the reason I’ve been able to accomplish anything at all,” Brown said. “I can’t play an instrument (except a little piano), and I had no friends that shared the same amount of passion for the creativity I was running after. So I did it all alone, and happily. I’m also very impatient, so now I don’t have wait on anyone for most of my visuals.”

Brown’s work is a product of the demands set upon a new generation of artist. Historically, the artists to keep an eye on were coined a Triple Threat: meaning they could sing, act, and dance professionally.

Artists are now expected to play a part in every aspect of the artistic process. A hands-on approach to each stage of publication: creation, production, and even marketing.

“I work hard on everything, but I think it’s cool that I do a lot of it on my own,” Brown said. “I’m an Advertising/Public Relations student at the University of Central Florida, so marketing has always been very important to me. I think it’s extremely important to have an online presence, because if you don’t, nobody will hear you. In fact, it’s a challenge to get people to hear you WITH an online presence. My advice is, make sure you have everything looking as professional as possible so bigger people can think you’re the real deal. That way it gives labels all the less work. You can sell anything to anyone with the right marketing.”

Having the right tools on the back end of the creative process is balanced out by a steady creative flow on the front end. Keeping this balance is the new challenge in this entrepreneurial age of publication.
“I just really want to make more music,” Brown said. “Yesterday I was supposed to release an entire EP, but as you can figure, there are tons of delays in the music industry, so we just settled on “Hand In Hand.” I finished writing this EP in January, so I’m SUPER ready for the next stage. I want to be known for my writing, and my voice.”

Seemingly, the many demands for an artist to develop are not going anywhere. Tomorrow’s pioneers follow in the footsteps of the many self-made phenoms of today.

We live in an age where a mixtape can turn into a record deal with a little help from social media. An age where artists can self release an EP on Soundcloud to go on to win critical acclaim.

The publication game is changing. Artists find themselves with their hands on the reins in ways they have never before imagined.

You can hear Gabriel Brown’s latest single, “Hand in Hand” below. For more of his music, head over to soundcloud.com/gabrielbrownmusic