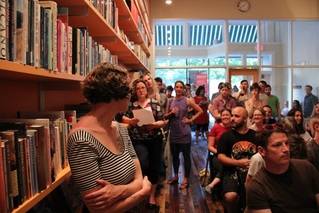 The PDX Literary Madhouse: The Greatest Lit Show on the Willamette

On July 17th, at Literary Arts in Portland, Oregon, Daniel Bullard-Bates introduced the “PDX Literary Madhouse,” or, as he said, “The greatest lit show on the Willamette.”

The event was composed of writers published in TheNewerYork, a literary presence both online, in print, and in film. This mixed-medium approach is the point for Josh Raab, editor of TheNewerYork.

The event was a reading and performance which included audience participation, letter writing, and even Morse code. Combining digital publication, creative writing, and a performance aspect allows for the medium to take on new impact.

“The dream,” Raab said in an interview with the L.A. Times, “is that when somebody submits a short fiction to theNewerYork then BOOM that story is now in a book, graphically designed on a poster, adapted into a short film, performed at one of our literary carnivals.”

The event at the PDX Literary Madhouse opened with “Depressed Obama.” This was a film created from a piece of writing originally published on TheNewerYork’s “Electronic Encyclopedia of Experimental Literature” (EEEL).

Like “Depressed Obama,” most of the night’s works were originally published by TheNewerYork on the EEEL. Some will also appear in TheNewerYork’s forthcoming print volume.

In its digital publication, below the video is a link that says, “What is this video?” This brings readers to a blog post about the mission to see the same stories in different forms.

“We want to explode your stories,” Raab said. “We want to design them as posters, we want to turn them into films, animations, songs, works of art. These are not adaptations, these are metamorphoses.”

Also included in the performance was John Mortara, who engaged the crowd with a selection from his choose-your-own-adventure book, Small Creatures/Wide Field. This piece was published by TheNewerYork as an interactive pdf and in print.

The final reading, (by the writer of this article,) was merely a list. This list was created using words and phrases from emails describing physical attributes of the elderly of New York City that had gone missing.

The reading begins with three voices reading the same phrases over and over:

“I so wanted to be there,” one comment on the event’s facebook page said. “Turned away at the door, venue at capacity.”