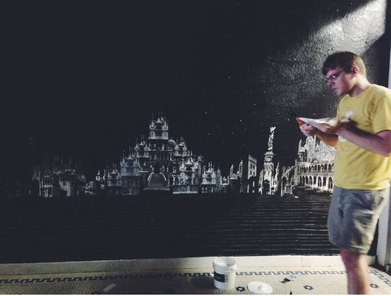 The work of collagist Brad Kokay has been a fixture in the Tampa Bay art scene for the better part of a decade. Kokay’s warped, nightmarish visions rest at the nexus of countless different artistic streams.

The product of meticulously layered images which have been manually distorted through the use of a photocopier, the repetition and surreal haze of these pieces evoke a distinctly otherworldly sense. The works reflect a diverse range of ideas and influences.

“Max Ernst, dada – futurism especially was a big influence,” Kokay said. “I think because everything was in motion. I was also inspired by a lot of the artwork from the ’70s punk zines, they had to do a lot of that photo manipulation manually. They didn’t have Photoshop or anything to work with.”

While the assembly of the piece is an engrossing process, the vision begins with the process of collecting materials.

“I love looking through old books, cutting things out,” Kokay said. “It’s all a part of the process.”

Kokay has been working in this style since early 2009, before which his previous pieces first laid the groundwork of his current approach.

“Before this I was doing tiny, 1×2 inch collages, which forced me to pay close attention to what I was looking at,” Kokay said. “You’re looking for a tiny piece, asking yourself ‘Is this more interesting out of context?’ It’s like a stop and smell the roses kind of thing.”

Eventually, the idea of meticulous and attentive collaging led him to the idea of preparing images.

“The copier allows an amazing amount of control over the image, especially in black and white,” Kokay said. “With black and white you can enlarge something 400 percent, you can shrink it 400 percent. It’s like an analog Photoshop.”

The creative process entails a balance of thorough planning as well as improvisation. The selection of material for the collage and the preliminary groundwork is methodical, while the manipulation and arrangement of the images can be much more freeform.

Kokay suggests that the manipulation of the images and what can be made of the product is at the core of the concept.

“Putting it together is about playing with the copier, like the copier is your paintbrush,” Kokay said.

Kokay’s body of work up to this point is impressive, but for him it is only the current phase in an ongoing process of artistic development. He has expressed interest in exploring several different artistic directions in the near future, including expanding outside of the gallery and coffee shop scene and more into the immediately public realm.

Kokay is currently in the process of creating a full-sized mural in the tasting room of local brewpub Cycle Brewing, something which he says he would like to explore more in the future.

He also has expressed interest in producing more live art. He does have experience in this from his work with local noise artists in a sound and visual art performance group known as Low Grade Acid.

“I want to do more shows with Low Grade Acid,” Kokay said. “Basically me doing collage and giving musicians some basic direction and then leaving them to improvise over it.”

“I’m also trying to get back into 3D stuff,” Kokay said. “I played around with some of that before,” he says, referring to a series of pieces based around collages on sheets of fiberglass which are then assembled on top of one another to give a dimension of depth to the piece. “I’ve been working with mirrors lately, using mirrors to create 3D effects.”

Kokay was formerly the art director at a local venue and gallery, but is now looking to establish his own gallery and open art space near downtown St Petersburg.

“It’s gonna be a nonprofit space,” Kokay said. “open every night from right after school ends until around 10 or later when there are events going on. We’ll have classes, movie nights, game nights, writing workshops – kind of an all-purpose, open studio and community art space.”

He says that the primary goal for this new art space will be to help other local artists gain exposure outside of the bay area. This could be done by networking with galleries in other cities both nationally and internationally.

“I’d like to have one gallery for local amateur artists and one for artists from other places,” Kokay said. “We can trade with other galleries to get international artists more recognition here and also get local artists greater recognition outside the bay area.”

For more information or work by Brad Kokay, check out his Tumblr.