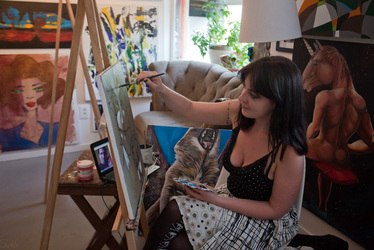 “Art should be a conversation starter, not just wall covering,” Rachel SV Parry, a 28- year-old artist working in Toronto’s west end said. “A lot of people have a very specific image of what can be on a wall, and my art doesn’t fit the criteria for most.”

Parry’s work is more than a little weird. Her latest series of paintings depicts crowned frogs: one cradling a guitar, another applying lipstick, and yet another seated at a bar with a tiny pint.

An earlier series, Humanimals, morphs animals and people. This series ranges from a woman with the face of an anglerfish, to a nude anthropomorphic unicorn smoking a cigar in outer space. Not the usual gallery fare.

Born and raised in Kanata, ON, Parry always knew she wanted to be an artist.

“Other than [wanting to be] a doctor for one day,” Parry said. “There might have been a day I wanted to be an astronaut too. On those days my parents were proud.”

She started developing her unique style when she moved to Toronto to study fine art at York University. What she remembers from her early art class are collages.

“We would cut pieces out of magazines and put them together and all the other kids would put together pieces that sort of made sense,” Parry said.

She found these collages boring and would distort subjects, placing an old man’s head on a baby’s body, or play with perspective. Her current surrealist paintings retain an echo of her early collage style.

“It made no sense but it was a lot more interesting,” Parry said. “If I can make it mean more than one thing to me then I don’t get bored of the idea before I finish painting it.”

She quit a year and a half into this program. She kept drawing, scribbling on pages in her school books, and finally established herself as a professional artist two years ago.

Parry works out of the Rose Will Studio. Located at 1630 Dundas Street West, just west of Dufferin Street in Toronto’s trendy DuWest neighbourhood.

Surrounded by cafes, restaurants, and a few remaining sports bars, the studio opened a little over a year ago, in October 2012. It also serves as a shared space for a collective of 10 artists. She and the owner are the only two who are there full time and make a living exclusively from their work.

“I can’t wait a week,” Parry said. “I have to work on it solidly for hours or days or however long it takes to finish it. It’s so frustrating to me if I have to wait even more than 20 minutes between layers.”

In addition to the three tree dancers, there are three canvases leaning against a pillar in the middle of the room. Only the backgrounds have been painted, but she’s already decided on the foregrounds for the finished paintings.
She’s constantly working on new pieces, and typically paints between three and five pieces on a given week, though when working on smaller pieces she may paint as many as 10. Every few months the studio hosts an exhibit, displaying new work from artists in the collective.

In addition to the studio, Parry’s work has also been shown in cafes and sex clubs. She likes the idea of having her work displayed in public spaces, places “where people can come and go, and make their own connections.”

It comes as no surprise that Salvador Dali and MC Escher are two of her favourite artists. Parry also finds inspiration in psychology, particularly “how easy it is to trigger a response from an unnerving visual.”

She describes her own work as balanced somewhere “between cute and scary.” Her inspiration comes from what’s happening around her.

With the Humanimal pieces, her human models suggested the animals they’d like to be. She found it an interesting entree into her subjects’ minds, a kind of “psychological exploration.”

She says she’s not picky about sources, whether she gets an image from a dream or something funny she’s heard. “I have a piece that’s — it’s a dirty joke — it’s a lake of breasts with a motorboat driving across it, and it’s called ‘HMS Milkshakes.'”

“I try to make a point to never take anything too seriously,” Parry said. “It’s a wasted day if I haven’t laughed at least once. They say simple minds are amused by simple things, but I think it takes a certain complexity to find humour in the little things. If I can present that for someone else to see, then that’s a life win for me.”