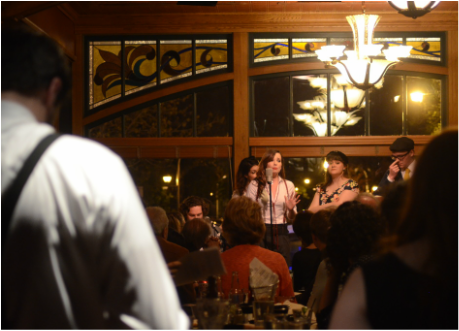 On May 4th and 11th, 2015, /KOR/ Productions closed out its sophomore season with a unique take on Bizet’s Carmen. The production follow’s Verdi’s Falstaff last fall, and follows the mold of the company’s inception, Boheme in a Bar.

The setting is taken out of Seville, Spain, and is instead brought to an American radio show. This allows the directors and the performers to unhook the story from its original setting, and easily adapt it to this casual, intimate space.

“When you’re studying theatre in college, staging in unconventional spaces is just a part of the game. In particular, I studied with a few members of SITI Company, who are very big on creating work for the space you’re in and using it to your advantage,” Stage Director Allison Shoemaker said. “I was in something that was staged in an elevator once. Still, a working restaurant is quite a challenge—hard to predict when Don Jose’s going to need to make an entrance right when someone is getting their burger. But I think that’s part of the charm. We had to purposefully plan for things to be loose, flexible, and ever-changing, and I think the cast really rose to the occasion.”

“The idea to frame the show as a radio show came from Allison,” part writer part narrator Kevin Lambert said. “Bizet did all the hard work in writing Carmen in the first place, we just found smart, creative ways to fit the concept to the show.  We always knew that there would be commercials from actual sponsors and foley work; however, we wanted to add a storyline for the “live studio audience” watching the radio show.  A lot of that came from meeting with Allison and talking through what she ultimately wanted to achieve with that story and the climactic moment.   Then working backwards from there, we, along with the help of the talented cast, found moments to drop in those story lines and refine them to ultimately create what you see onstage.”

What Carmen certainly doesn’t lack is talent. Thanks to Chicago’s rich pool of young trained classical singers, the main challenge came in adaptation to format.

“The main unique approach to this show is that we weren’t really acting out the actual libretto, as is usually done in a show,” Tenor Joachim Luis said. “Instead we were hired singers who were singing into microphones – our acting couldn’t be seen as it’s supposed to be all audio (as radio shows are). The main story is the B story – what happens to and between our ‘real’ characters. Some characters were trying to upstage others. Another character is the town tramp. Another character is the overall cool guy. And my character was constantly getting drunker as the show went on.”

This not only calls for a performer capable as a singer, but that can develop characters that the audience can easily latch on.