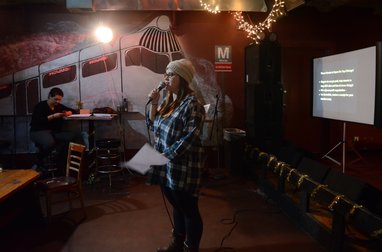 ﻿Why Don’t You Just Get a Job?: The Barriers between Study and Execution

A common problem for people looking to start a career in a specialized field is finding a sustainable lifestyle. The idea that 20-somethings have a hard time finding work is a prevailing narrative in many think-pieces, and classical singers provide an interesting study in trying to find sustainable income from specialized work.

Chicago is no stranger to classical singers trying to find regular work. The plethora of schools throughout the city and the suburbs brings many looking to start a career.

“I moved to Chicago from Toronto to pursue a Master’s degree in Voice Performance at Roosevelt University,” Chicago Mezzo-Soprano Evita Trembley said. “There’s a great sense of community within the opera world here and the opera entrepreneurship is just thriving in this city. I really don’t think there’s a better place for a young opera singer.”

This statement on the arts in Chicago is surely not limited to classical singing, which means that demand for jobs is high.

“I’ve never been at a place in my life where I could solely pay bills through art,” tenor Joshua Louis Smith said. “ I have a long non-performance resume full of office experience, management experience, etc — and I can’t get interviews for jobs I’ve done!  That’s one of the reasons I’m temping at the moment, and it’s hard.”

Although some would consider it an issue of non-committal tendencies, the inability to find consistent work seems to affect 20-somethings on a generational level. According to a study by the US census, the rate of young people buying their first home is especially low.

​“People like musician backgrounds, but I’m unable to find a job field that provides real security,” countertenor Greg Bohling said. ”I have not had health insurance much this year. Unless it’s offered by an employer, I will forgo insurance in favor of taking voice lessons.”

Another trend among specialists seems to be the pattern of moving for work or pleasure. All three of the singers mentioned here have recently moved to a new city for various reasons.

“I basically sacrificed free healthcare to move to a country where I have no healthcare,” Trembley said. “From what I understand I think I could purchase some sort of health care through the university I graduated from but I haven’t looked into it because, yeah, I can’t afford it.”

For such drastic measures, you would think that the road to success is a clear one. In reality, statistics have shown that acceptance rates for applicants for most well-known young artist programs (Wolf Trap, Central City, Florida Grand) sits at around ~3%.

In an article from 2016, opera consultant Kristina Driskill put the situation in woeful terms.

“I don’t think it is even a question that more than 1-4% of singers who auditioned were talented enough to be in one of these programs,” Driskill said. “Even if only a quarter of singers who auditioned were actually at the level of the programs (are there’s a high likelihood the number is much higher) – that’s still over 20% of excellent, viable candidates who have to be turned away. And at that point it becomes about many things – voice type, roles to be cast, relationships already formed – many things. And let’s not forget those singers who […]can take some of that 1-4% before the numbers even start.”

The significance on a macro scale is readily apparent, but how that looks to the singer you have in the family is another story entirely.

“I’ve vaguely looked at YAP tracker,” Bohling said. “I often look once every month or two and go through as many as I can then get incredibly depressed.  I have not auditioned, as a countertenor it’s really hard to find a YAP.”
Of course, it’s not all tragedy. Some have good experiences with mid-level YAPs, expanding their skills and networking locally.

“I have definitely considered a YAP and have done many YAPs throughout Canada and even in Chicago,” Trembley said. “As a young singer in my undergrad I was definitely just interested in getting any performance experiences I could no matter what. As I got older I’ve started to look for more paid YAPs or YAPs where I don’t pay. But as everyone knows it’s VERY competitive.”

What prevails for singers of this generation, though, is the persistence. Making the situation work and keeping an eye on what needs to be done.

“I’m currently taking lessons about twice a month,” Smith said. “Hoping as I begin to make a bit more money I can get back into the swing of coaching things.  Budgeting has been a major concern, which is why the coachings have slipped by, but I consider lessons an essential, not a luxury.”

Budgeting income against expenses becomes a balancing act for most 20-somethings. Knowing where to spend and where to not is crucial if a performer hopes to continue work on self-improvement.

The challenge is when this need for flexibility, in scheduling, in budget, and in focus, becomes prohibitive to the standard fare. This tight-rope that performers walk is preeminent for the performer, but the easiest disbelief for the audience to suspend.