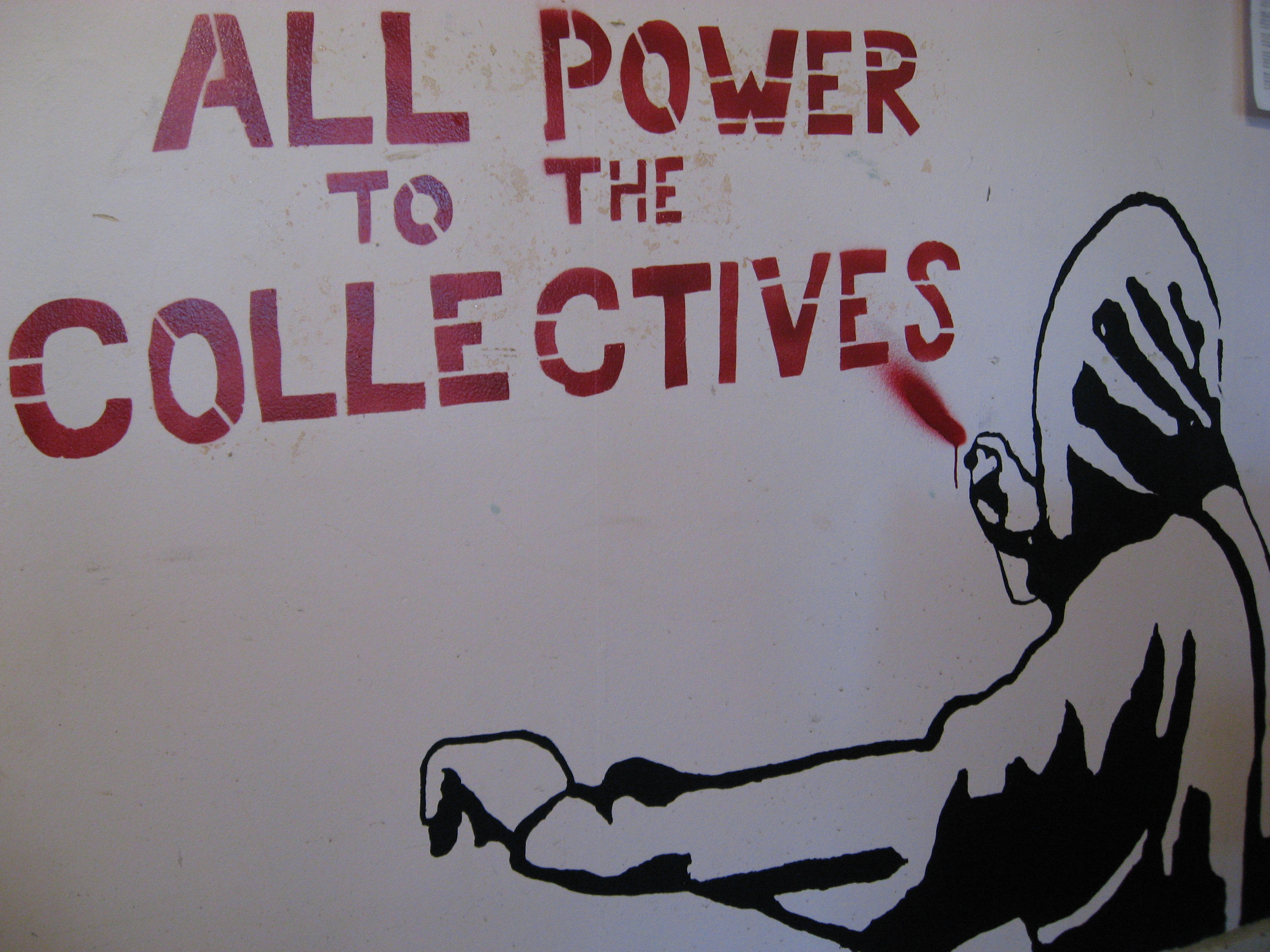 On Defining Collectivism, From Anarchists to Artists

There can be no “blueprint” for social revolution, since it must be left up to the workers themselves to decide how best to organize themselves in their own areas. First the system of wage labor will be abolished by the workers “taking possession” of all capital and tools of production, ie. the collectivization of property. The self-employed and the owners of family businesses are to be left alone to operate as they wish, but with this important exception: “his former hired hands, if he had any, will become his partners and share with him the products which their common labor extracts from the land.”


Collectivism, as a concept, greatly influenced the communist movement and the two were very much ideological cousins. These, being an alternative to capitalism, have not left the stage of political discourse since their inception.

Although a seemingly distant comparison, this holds especially relevant when looking at grassroots performance groups. These groups, having to exist outside of the norms of performance tradition, have to accomplish their goals in other ways.
​
“One of the reasons that we like to keep it flexible is so that we can program whatever we want and not have to worry about it,” Hannah Christiansen, founder of Zafa Collective, said.

Zafa Collective is an organization founded within the last year, but is fervent in its performance frequency. Its format, like many groups forming now, works in the collective model.

“I’m the main administrator, as far as, I send people emails telling them like ‘we’re going to rehearse here, at this time, please be there’ and I think it’s a pretty communal decision making process from there,” Hannah said. “We’re more like six people who are here always. And as far as people that we bring in, so the show that we did in December […] was for string orchestra. So we pulled in I think our total was 14. And then we did one other larger ensemble piece that was one of our commissions, and I think we had like 14 or 15 pieces on there, which was more of a winds and brass involved setting.”

This flexibility is distinct, and is fueled mostly by the artistic energy of its members. This differs greatly from most mainstream performance outlets, whose artistic designs are shaped more by its administration, its board, and its donors.

There are obvious benefits in this, but there are also some challenges.

“I think the very idea of Noise Bias as it exists right now is challenging,” Jill de Groot, founder of Noise Bias, said. “Like we don’t make money and we don’t pay our performers and we can’t pay for commissions and we just started a few months ago and we were very lucky to find someone that let us use his space for free.”

This is complicated further by the other side of collectivism: condensing each voice into similar goals, and working toward those goals in the most collaborative way possible.

​“Frankly with the meetings that we’ve had so far there’s been a really conscious choice to make sure that everybody is being heard,” Marysa Abbas, founder of Praxilla Femina, said. “We literally have instated a hand raising rule. Which has actually worked really well because there are always people in any sort of group setting that are going to naturally want to make their voices heard.”

There is a necessity in hearing all of these voices, which is something that collectivism actively recognizes. The truth of the matter is that all subsets of culture provide a different perspective for what the entire community needs.

“I actually learned a concept that we talked about a little bit from my YWCA training that was called culture humility and I think that’s a really helpful term,” Abbas said. “You could have a Ph.D. and you know Brazilian studies you did not grow up in Brazil. You did not know what it’s like to live there. To truly grow up and live there and have that lived experience.”

Collectivism also allows for smaller communities. This allows for the groups to be self-sustaining, and this can promote and strengthen from within.

“One of the non-publicized aims of our collective is also self-awareness and self-education,” Lily Guerrero, a member of Praxilla Femina, said. “We’ve made a point of creating opportunities for anyone who is in the collective to go on outings together We went to go see the James Baldwin documentary, I Am Not Your Negro, we went to the Chicago Volunteer Expo to look for further opportunities where we could be of good use.”

This provides the most unique and powerful benefit of collectivism, the ability to redefine goals and expectations by coming from a different foundation.

In the case of these organizations, they are able to accomplish something different with the work that they do.

“Yes, there’s the music aspect, but I think the social activism aspect is just as important to the music for our collective,” Guerrero said. “And so we create these opportunities. We look for them and then put them in a spreadsheet and say whoever wants to come to this, this is an opportunity for you. I always say like get woke.”

It also sets a stage for revolutionizing the scene, especially when there are groups being neglected.

“I think my broad and long term goal is like to normalize female composers and female musicians,” Kelley Sheehan, a founding member of Noise Bias said. “Sometimes I feel like a unicorn but we’re not. We’re not an anomaly. I went and did a campus interview recently for doctoral programs and I went down and sort of sat in the room and realized like oh, including faculty and the students, I’m the only female identified person here and that’s the norm for me. I’m not necessarily bashing the place, but it would be nice if we could broadly normalize female identified people in spaces of power within the new music community.”