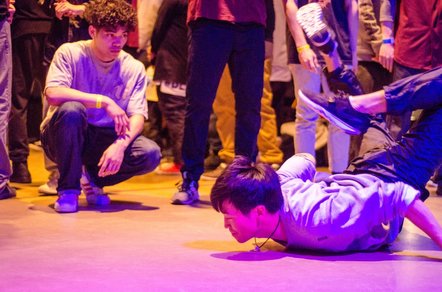 On Saturday, April 29, 2017, a Bboy practices his signature move just prior to the preliminary rounds at the Chop Shop in Chicago.

This weekend in Chicago was not the weekend that most would invite their friends to visit. The windy city experienced the typical Midwest spring weather, where it was the 70s one day and then dropped to low 40s with a severe storm. Over 100 people from all around the United States traveled to Chicago and gathered at The Chop Shop in Wicker Park on Saturday for one of the biggest breakdance events in Chicago, Royalty.

Just behind the dining and bar area of Chop Shop, you will hear heavy drum and bass and about 300 people on the other side of the glass wall. Over 100 breakdancers, or what the Hip Hop community prefers, Bboys and Bgirls, were spinning upside down while holding themselves with just one hand or creating a complex pattern with their body on the floor like an artist with a brush on a blank canvas. They were all warming up for a shot at the $3,400 prize pool.

“I think one of the biggest things that are magnetic about a Bboy/Bgirl jam is the energy. It has to be authentic,” said Manuel. “With the organizers of this jam (royalty), it’s going to be very authentic, and for outsiders of the Hip Hop scene, that’s something intriguing to every body I think, of course, plus the physicality of folks performing.”

The two teams stand across from each other, face to face. Each dancer is ready to reply to what the previous dancer put out with their dance. Similar to a chess match, just responding is not enough. In addition to the response, the dancers also have to put out more moves, in order to prove to the three judges that they are better.

A Bboy holds a headstand freeze in the middle of a cypher on April 29, 2017, in Chicago. A cypher is where dancers take turns to showcase, exchange or communicate through their body and it is usually in the form of a circle. ​

While breaking events do happen in the city of Chicago, Royalty made it more accessible to the general with a convenient location and flexible time. It is not often for a breaking competition to start at noon and end before 6 p.m.

“Breaking culture is slowly coming back. I think it’s cool that people nowadays are starting to understand how the battles are run,” said Tran. “For them to slowly understand how our culture and how our battle culture works is interesting and I didn’t expect them to know that and it’s awesome. ”

Contrary to what many would believe, this dance isn’t always about the gravity-defying and acrobatic moves. It is the combination of the physical demand of breaking with musicality and creativity that sets apart the best to the rest.

There were dancers of all ethnicities, ages, gender, body types, and occupations. From students, children as young as 12-years-old to graphic designers, IT consultant, professional bboys and Bgirls, etc., all were there to compete for the grand prize. Unlike basketball, football or other competition, a breakdance competition is opened to all levels of competitor.

Despite all the mocking and threatening gestures that people put out when they battle each other, in the end, they all ended with a handshake and mutual respect for each other. While winning the prize money is a great incentive, it is not the only reason why people in the Hip Hop community come to the event.

“I think the most important thing in terms of breaking is meeting different people and learning how they view the culture is really the biggest thing,” said Justin “Case Close” Millan, a student at DePaul University.

For Millan, it was more than an opportunity to meet different people and learn about their culture but also another way to better understand himself and push forwards both as a Bboy and in life.

For younger dancers, this is not only the chance for them to test their skills but to also learn in person from the veterans in the Hip Hop scene. Away from the competition stage, dancing doesn’t stop there. In the form of a circle, dancers take turns to communicate with those around him through their dance moves. In the short 30 to 40 seconds, people are able to see the thought process of the dancers while he/she interrupting the music.

It’s an event for everyone and all levels of dancers, but to a seasoned Bboy like Tran, he said, “It’s kind of like a family reunion.” This is the one place for all dancers to gather.