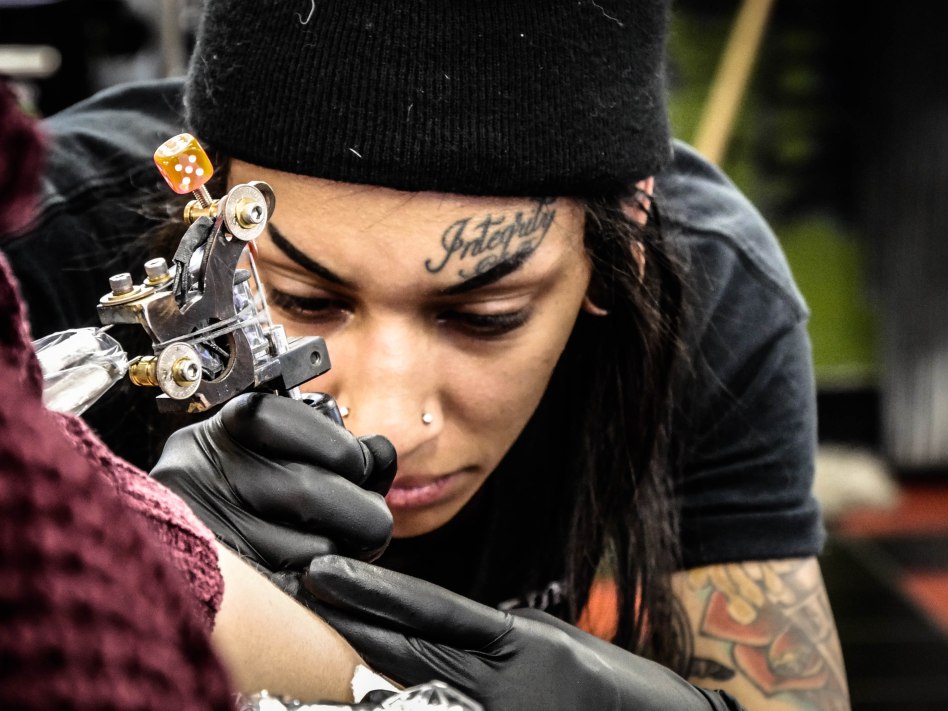 The Artistry of Ink at Atomic Tattoos in Milwaukee

I recently seized the opportunity to shadow a friend for a couple days at her tattoo shop. Atomic Tattoo is a chain, though I stayed at the one in the North Side of Milwaukee.

I feel at home in tattoo shops. Being a transgender individual, I am more comfortable in communities that have a strong foundation of counterculture, because they are historically more accepting of “alternative lifestyles” such as my own.

This shoot was special because I got to capture artists creating art, in their own zone. I think that it embodies vulnerability, and when people are vulnerable, others are more easily able to relate to them. It also allows the image to tell more of a story.

Here we see Jess getting her station ready for a tattoo. Compared to the rest of my portfolio, I enjoy how this mimics the color palate that I was trying to cultivate, thus solidifying the style of my portraits and portfolio.

What I enjoy about this picture is that she’s seemingly on autopilot. There is motion blur in her hands as she readies her tools, though her face is solid and distant. She doesn’t need to see what she’s doing because this is now the routine of a well-oiled machine.

Here she is in front of a wall of Sailor Jerry flash art. Sailor Jerry is arguably one of the most famous tattoo artists, cultivating a very distinct style that’s immediately identifiable. While there’s several pictures of him tattooing, there is a considerable amount of photos where he is face down on his table, completely exhausted. The only people that seem to acknowledge this other side of him are fellow tattoo artists.

I love the juxtaposition of her against this wall of his flash art, knowing the story of his exhaustion. This exhaustion is mirrored in Jess, and manifests as the exhaustion of being a female in a male dominated industry.

Many older male artists believe that women in the industry lure their clientele in simply with the implication that being female is inherently sexual, as opposed to taking into consideration entire portfolios worth of work done by impeccable artists who just happen to be female. Just as tattooers were seemingly the only people who were able to see Sailor Jerry’s exhaustion, female tattooers are seemingly the only people who are able to see the exhaustion of blatant sexism in their industry. 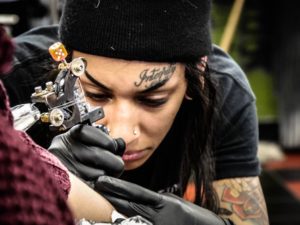 When I showed this image to Jess, she immediately commented about how she never realized how close she got to her needle. She is meticulously detailed in her work, and has great pride about it.

I love how the needle is in focus while everything is soft because of the shallow depth of field. This is emphasized by the face that her eyes are looking directly at the needle.

There are a lot of small details in here that seem to stick out to me. I’m a huge fan of using blur to instill a feeling of motion. I feel that when there is implied motion in an image, it’s more entertaining to the eye. It’s crazy how a still image could make someone think of movement. This is mimicked in the rubber band on the needle.

There is very little flesh between the skin and the sternum. When this area gets tattooed, the needle pierces the bone. In short, it is painful.

His face speaks for itself.

You can find more of Adva Lipson’s writing here

Adva Lipson is a Milwaukee based photographer and journalist. She specializes in documenting Midwestern counter-culture.

Adva Lipson is a Milwaukee based photographer and journalist. She specializes in documenting Midwestern counter-culture.