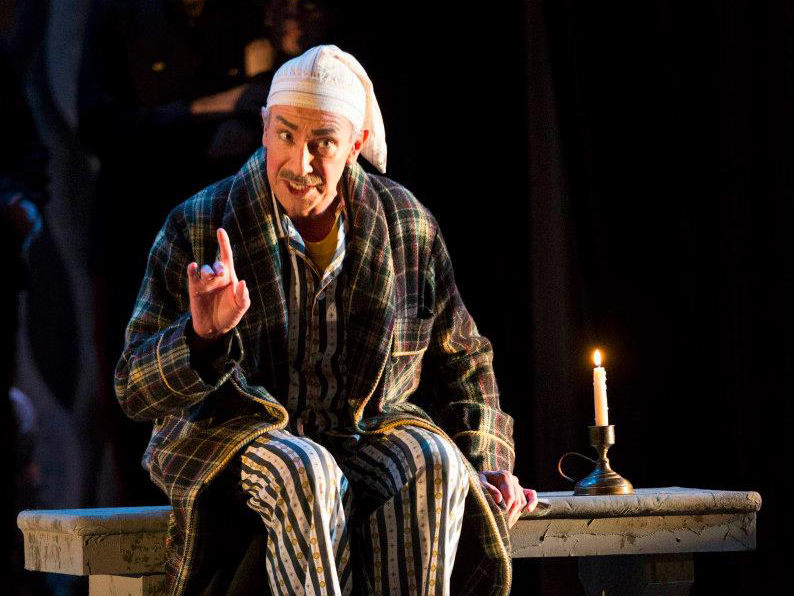 In the last few years, Chicago has seen an ebb and flow of grassroots Opera, and there are few who know that as well as Aaron Hunt of Transgressive Theatre-Opera.

The company is in the midst of its fourth season, and while the first couple works are going back to Hunt’s roots (Last November’s A Gilbert and Sullivan Jewelry Box and the upcoming Cosí) he has a very specific vision for the space he wants the company to occupy.

“I have really focused on contemporary works up until now which I felt answered our mission statement which is to a have pieces that are as spoken as they are sung,” Hunt said. “and I’ve always been able to mount something that’s contemporary music, but at least some of the scenes and sometimes the most important apocryphal scene is suddenly spoken. Which I think is interesting a lot of contemporary composers actually do that. Another reason that belongs in the mission statement is that I am interested in the way that Lyric Theatre is becoming a larger statement in the arts world as lines begin to blur between opera and operetta and musical theater and as people begin to cross over.“

In a town like Chicago there’s significant room for this. Chicago’s affordability and educational spaces allow room for a pool of talent that are able to make these genre shifts.

“I was very specific in looking to cast opera singers who I knew had the chops to act,” Hunt said. “[singers] who really could act in a contemporary connected sort of cool… what’s the right word here in Chicago? We like gritty. We like gritty and real which is a little hard sometimes for Opera where you have to guard the voice but to be able to actually give that sort of honest upfront performance which is another reason why I’ve been working in small, mostly found spaces in the storefront idiom.”

This juxtaposition, the DIY tastes of a city whose art scene is accustomed to the flavor of little budget while being educated enough to know when a cadenza wrong, has become part of the way that Hunt thinks about the singers he will work with.

“I also know because I performed so long in this city that there are classically trained opera singers who are not known to sing at all or known to just sing music theater or sometimes be belters,” Hunt said. “And people don’t know that they’re highly trained and in Chicago. I suppose this isn’t the sort of thing you say, but in Chicago if you’re an opera singer you may take it off your resume because then your voice ‘isn’t real.’ if you’ve got a couple of operettas and you’re going to audition for the Goodman that is not on your resume.”

Chicago’s vanguards, while willing to take risks to expand boundaries, can also be sectarian. Hunt is familiar and outspoken about this, a perspective needed especially from those that directly own and operate their companies.

“I’m looking for ways in which there can be cross pollination so that with the storefront Opera Company boom we are having right now, which is fabulous, we are able to maximize our audience potential,” Hunt said. “That’s so hugely important.”

While the city’s pool of companies allow for a plethora of resources and role opportunities for emerging singers, the yearning Hunt and others have for communication across companies has become a driving force. It also highlights a key factor in the way Hunt works, he listens.

One shining example was last year’s Maligned Mezzo lecture recital Hunt put on. The evening was a curated performance of pieces throughout the Mezzo canon used as a tool to comment on fach prejudices throughout the history of Opera.

“As I was choosing a season and as I was looking at what I wanted to do,” Hunt said, “I immediately began to hear from my Mezzo friends. ‘Why do you never have a part for me? I don’t understand it. We’ve worked together I know we adore each other. Why aren’t you programming anything for me?’ Which caused me to sit down and think what’s out there that I really want to do that’s got a part for you and then that caused me to go further into thought about how has this ever happened. Why am I here? Why are there no parts for Mezzos?”

Of course, his next upcoming project is a step into the familiar for Operagoers. When Scapi chatted with Hunt, he was allowing room for the performers to find out how TTO’s production would ultimately feel, though there’s one thing he knows for certain.

“If we can’t give something that’s very different with that Cosí that then still matches our mission statement then we’re not playing our game,” Hunt said.

You can hear the entire interview with Aaron Hunt here, and keep up with all things TTO on their facebook page here and on their website here.