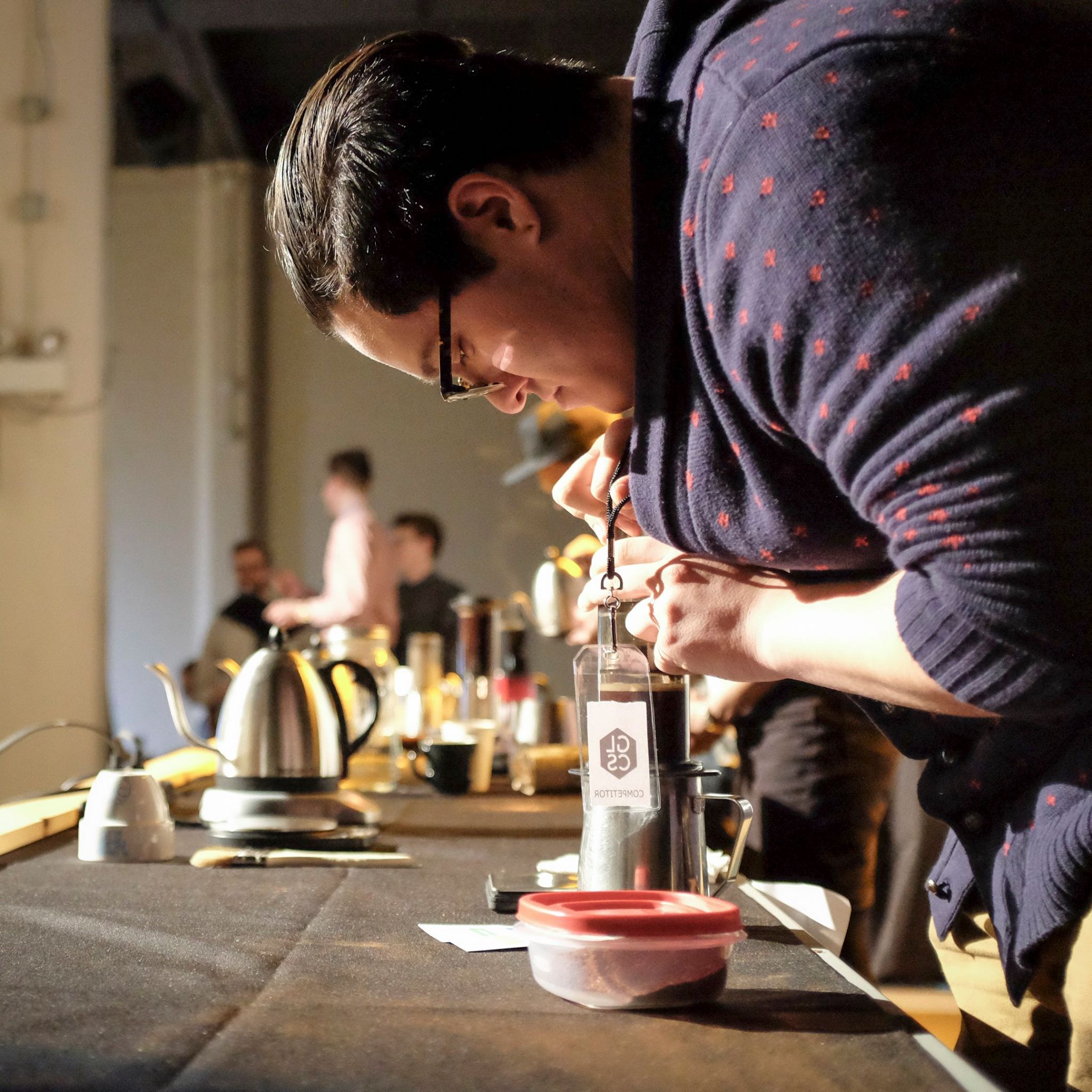 The Vehicle of Coffee in Building Relationships: A Conversation with Eli Ramirez from Halfwit Coffee

On a chilly first of September, Daniel and Maureen met with Eli Ramirez from HalfWit coffee to speak about his experiences in the roastery and coffee business. As has been the norm Moody, the cat, struggled to get comfortable during the interview.

“HalfWit is a coffee roastery that started out of The Wormhole Café in Wicker Park,” Ramirez said. “HalfWit is opening [a] brand new café, training lab, and roastery just west of Kimball on Fullerton Avenue.”

This is exciting news because, for the first five years of its existence, HalfWit operated solely as a roastery without its own café.

Throughout the last five years, Eli has had the opportunity to grow with the company.

He began as a trainer at The Wormhole before transitioning to HalfWit in a role he described as ‘like the secret helper,’ because he both helps train employees and helps by working at the partnering cafés with the goal of creating an atmosphere of support.

“Honestly, what I think could set us apart is the way we interact with all of our partners,” Ramirez said. “We work really hard to get to know who we’re working with and only choose to work with people who want to work with us.”

The value HalfWit places on building strong relationships with partners is evident in the way HalfWit thinks about progress and goals. Eli states that meeting targets is not the main priority for HalfWit or its owner Travis, a hands-on person who arrives at The Wormhole every morning at opening; instead, he emphasizes on the importance of nurturing partnerships.

“We have to be really true to ourselves,” Ramirez said. “So, if one week I have 5 different people who are really interested in our coffee. I have to ask myself first like, Can I handle that? Can I add these five people to my already existing roster of people who I have to care about? Can I give them the same treatment I give everyone else? or, If I add them in will I be diluting everybody else’s treatment?”

Eli’s passion for coffee and relationships led him to China where he spent five days learning about his coffee’s origins and meeting individuals in charge of its production. He earned the opportunity to travel to China after competing at the very competitive annual United States barista competitions.

“Out of like 120 people like 36 people go on to the nationals and it’s pretty normal if you go to nationals that you will also go to the origin from where your coffee is coming from,” Ramirez said.

In Eli’s case, he was able to visit the farm in Southern China where his coffee is produced. There he met an American named Tim who owns a coffee exporting company. Tim and Eli went to a small town bordering Myanmar to meet a Mr. Hu, who Eli described as ‘an ultra intelligent elder,’ who people seek in order to learn about farming, coffee, or life. Mr. Hu owns three farms, one at which Eli stayed while visiting China.

“It has nothing to do with the product. At all, at a certain point. It honestly, for me, has to do with the people you meet,” Ramirez said. “The relationships that are being formed. Like I’m sitting with you two, I never would have done that if I wasn’t in this industry it’s so cool that both of y’all ave invited me into your space.”

The importance Eli places on relationships can be noted in how he began, and why he continued, in the coffee business. Eli began by selling coffee out of his dorm room after he was unable to find a job as a barista due to his lack of work experience. While he began by selling coffee to whoever showed up for the coffee, he states that he realized that “coffee is just a vehicle.” It is something that can be used to meet other people.

So, in the spirit of building relationships, go meet HalfWit coffee. On their website, you can find the partners who are selling HalfWit coffee. You can also visit the new café, called HalfWit Coffee Roasters, located on Fullerton just west of Kimball at 3431 W Fullerton Ave, to have a taste.

You can hear our entire interview with Eli Ramirez here, and find more of Lisette Garcia’s writing on her blog here.