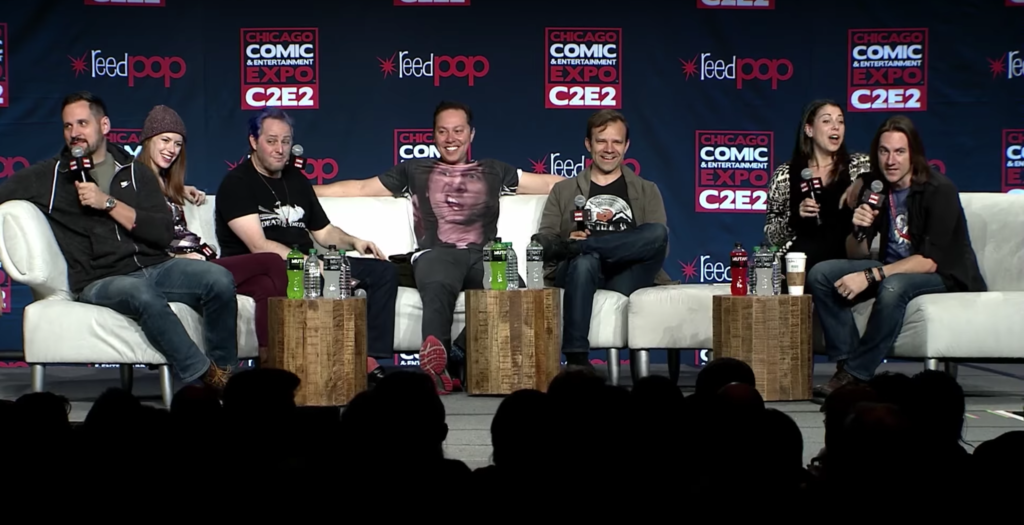 For those following the nine years of C2E2, the platform has grown in many ways and has worked to take along its beginnings wherever possible. One of the venues it’s been exploring this year and has had exhibitors in the past is the world of tabletop gaming.

There were a few panels dedicated to the world of tabletop gaming and its likely most famous game Dungeons & Dragons, featuring the work of creatives in both liveplay and Question and Answer formats.

One up and coming D&D podcast, Dungeons, Dice & Everything Nice, features four players and as their site says, “the players are all ladies and the bits are all authentic.”

The game played at C2E2 was a one-shot using the characters they use in the game overall, involving a chopped-inspired cooking challenge that blended the mechanics of D&D proper in a way that allowed for the players to compete culinarily without touching a knife.

Of the many questions asked, many wanted to know how Mercer draws inspiration for the game while managing players.

“Focus on finding fun moments for your players that you can fit into the story,” Mercer said. “Wrangling players is part of the challenge of DMing…you really have to ask the players to be present, and, you know, respect the time and effort you put into the game.”

One other aspect that they were able to talk about is how D&D is expanding, and in some cases there are folks sharing the game with younger generations. The tricky thing as creator and players is making sure to not get too caught up in the function of the game and rely on the storytelling.

“They’re not going to remember everything, and don’t care about them memorizing the rules,” Liam O’Brien said.

“Focus on finding fun moments for your players that you can fit into the story,” Mercer said.

You can see the full interview with Critical Role on their youtube page here, and keep up with Dungeons, Dragons, and Everything Nice on their site here.