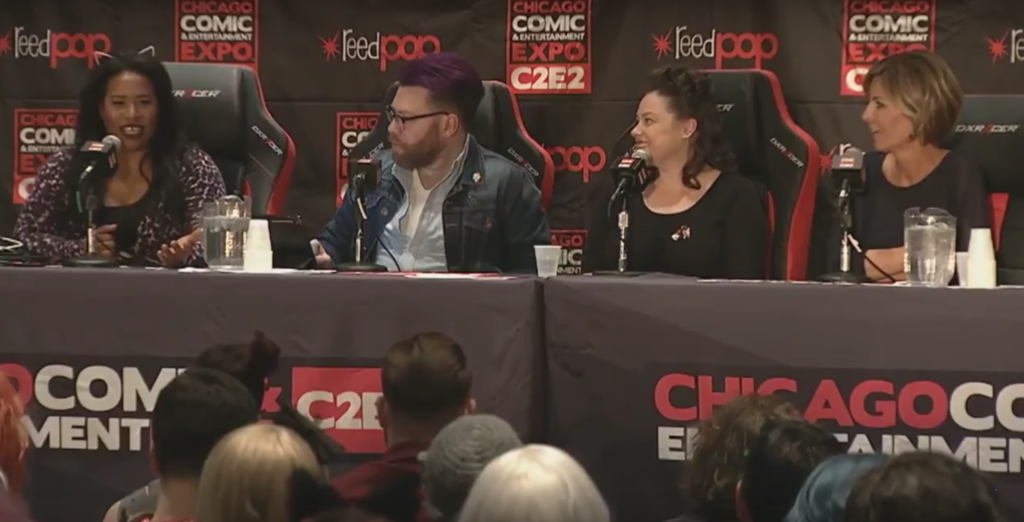 #C2ScapEE2018: C2E2 Podcasting Panel Highlights the Value in Originality with Travis and Teresa McElroy, Symphony Sanders, and Hello From the Magic Tavern

Best described as digital radio shows for every interest imaginable, podcasts are quickly becoming a mainstay of pop and fandom culture. This made this year’s C2E2 an ideal venue for podcast fans to celebrate their love for their favorite shows and get a chance to meet the stars of popular series like The Adventure Zone, Welcome To Night Vale, and Hello From the Magic Tavern.

Convention organizers devoted significant panel time to highlight podcasters in C2E2’s extensive 3-day schedule. The last of these events took place during the con’s final hour. Fans packed into McCormick Place’s Room S404 to listen to Travis McElroy (My Brother, My Brother, And Me; The Adventure Zone; Shmanners), Teresa McElroy (Shmanners), Symphony Sanders (Welcome to Night Vale), Arnie Niekamp, Adal Rifai, and Matt Young (Hello From the Magic Tavern) talk about their experience as professional podcasters and share their thoughts on the past, present, and future of the medium. All six guests answered each moderator and audience question while also asking follow-ups to each other as the conversation evolved naturally.

“I am here to share what I know, but also I’m as excited as many people here to learn from you guys,” Arnie Niekamp said to his fellow panelists.

Hello From The Magic Tavern is the collective brainchild of Niekamp, Rifai, and Young, three veterans of the Chicago improv and comedy scene. Each episode is completely improvised, but the details established within that improvisation become a permanent part of the show’s ongoing worldbuilding. Niekamp plays a fictional version of himself who, when he finds himself trapped in a fantasy world after falling through an interdimensional portal behind a Burger King, adjusts to his new life by hosting a conversational podcast with a bombastic wizard named Usidore (Young) and a snarky shapeshifter named Chunt (Rifai). The podcast recently celebrated its third anniversary, and is now just beginning to tour nationally.

“I think I’ve just recently maybe gotten to the level of when I mention the podcast to someone, where they’re like ‘Oh what do you do?’ […] and I’ll say ‘Hello From the Magic Tavern,’ and they’ll say ‘I’ve heard of that!’ which is amazing,” Rifai remarked when asked what it felt like to be “podcast famous.”

Symphony Sanders was also on the panel to talk about Welcome To Night Vale, which is a scripted show chronicling daily life in, as Sanders puts it, “a town where weird stuff happens every day and people just deal with it.” Sanders plays the recurring role of Tamika Flynn, a teenage vigilante who is renowned in Night Vale for both her prodigious reading level and her ability to destroy monsters and hostile corporations alike with her trusty slingshot.

Sanders signed on to her first podcasting project with no idea what to expect, mainly accepting the offer to join the cast in 2014 due to her curiosity about the art form and her interest in the world of Night Vale itself. “When [creator] Joseph [Fink] asked me to do Welcome to Night Vale, he asked me to go on tour first, and literally I didn’t even ask him if he was going to pay me,” she said when asked how she first became involved. Sanders now tours and performs worldwide withWelcome To Night Vale as her full-time job.

Rounding out the panel was Travis and Teresa Mcelroy representing their podcast Shmanners, a podcast that charts ettiquette historically, but also the Maximum Fun podcast network and the McElroy line of products, include My Brother, My Brother, and Me, and The Adventure Zone.

Travis and Teresa’s background is in theater, Travis has extensive background as a performer and a set producer, and Teresa McElroy has significant experience as a musical theater performer.

“In musicals, oftentimes the audience is your partner,” Teresa McElroy said. “[…] And so, having the audience as your partner really translates well to podcasting because you are speaking to them and also the other person in the room.”

The panel eventually turned to the podcasting medium, and how a world of individual podcasts can find ways to collaborate and give.

This even extends to collaborating with podcasts that won’t benefit you as much directly. For Young, in those scenarios “You’re paying it back.”

“It helps them out, and there probably is somebody listening to their show that doesn’t listen to your show,” Young said.

“that nice bolstering of each other is how I think a lot of growth happens,” Travis McElroy said. “Not just growth of an audience, but also of like, your understanding of the world of podcasting, [which is] still very new.”

You can follow all things mcelroy here, check out more Maximum Fun podcasts here, follow Symphony Sanders on twitter here, find out about Welcome to Nightvale here, and about Hello from the Magic Tavern here.

You can keep up with all of the Scapi post-C2E2 coverage here.