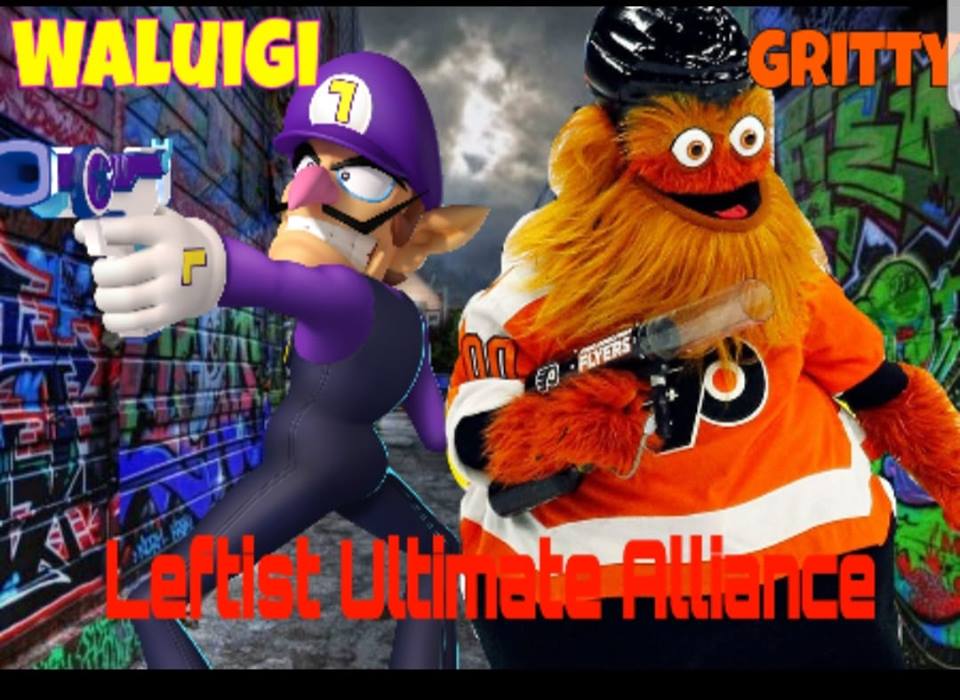 Is Waluigi The Next Socialist Cultural Icon?

In order to answer the question proposed in the title, I need to provide some context. First, if you find yourself very lost, Waluigi is a character in the world of popular video game series Super Mario Brothers by Nintendo.

Waluigi first appeared in Mario Tennis in 2000, and since has appeared in multiple Nintendo games. Think of him as the Wario to Luigi’s Mario, if you couldn’t tell from the clever naming convention, which actually comes from the word for bad in Japanese, Warui.

For this reason, throughout Nintendo games he’s garnered a bit of a cult following. He’s a figure that rides a fence. Many players go out of their way to pick him when available, while multiple video game outlets, like Kotaku, have thrown him in their list of annoying video game characters.

It’s because of all of this that there has been a movement to have Waluigi in Nintendo’s greatest Battle Royale of all time, Super Smash Bros. In fact, when it was announced that he wouldn’t be in the series’ most recent Super Smash Bros. Ultimate, a movement began of sending memes of Waluigi support to creator Masahiro Sakurai.

Since then, Waluigi has become a frequent subject of memes across social media platforms.

So where does socialism come into play in all of this?

Well, the left has had a good deal of memeing going on of its own in recent years. Most famously, (to the chagrin of some to the further left,) the Bernie Sanders Dank Meme Stash became a place during the democratic primary for meme makers to share their “hot takes,” eventually splitting off into other facebook group meme pages.

The splintering here is what you should be taking note of, the vast sea of “leftbook” facebook groups is a wild ride not for the faint of heart. Many groups splinter off into series of subgroups, and some can’t handle the increased attention, as evidenced by the archiving of the famous Democratic Socialists of America Dank Meme Stash a little over a year ago.

And so, many left memers have worked hard to bring cultural icons into the fold. That’s why when the Philadelphia 76ers began the “Trust the Process” mindset, democratic socialists quickly got behind the mindset more broadly as a metaphor for working towards a socialist structure democratically.

It was another Philadelphia icon that became well known more famously and used as a metaphor for the left, and that was the new “Gritty” mascot for the hockey team the Philadelphia Flyers’.

As The Daily Beast reported back in October, the Flyers introduced Gritty, a seven-foot-tall bearded entity in a hockey jersey, as their new mascot. President Donald Trump visited the city to speak at a conference center, where protesters outside marched with pro-Gritty, anti-Trump flags.

“Gritty is a worker,” the socialist magazine Jacobin tweeted two days after Gritty’s launch. Someone made a Gritty parody account in which the mascot is a member of the Industrial Workers of the World.

“This is a joke people have been making for a while,” Philly writer Ciccariello-Maher told The Daily Beast. “Since Gritty’s appearance, people have, half tongue-in-cheek, joke about Gritty being a queer or trans icon and a radical spokesperson. These are always half jokes, but they’re also things people are putting some real politics behind as well.”

It’s in this context that we see the birth and growth of a facebook page like Justice for Waluigi, which is still young but has reached over 10k likes on the platform.

“The page is only a month old or a little more, and was started by a friend who invited me to come on board,” John Paul Zigterman, who also admins Beep beep lettuce and hosts a podcast with the same name.

The page also has a clear left bent, while being the most popular Waluigi facebook meme page right now.

“Running a meme page is something I don’t take too seriously, but it comes with being forced to make editorial decisions, and I think if you have a lot of reach using the common currency of online discourse [memes] you should probably try to spread good ideas.” Zigterman said. “So much of meme culture is in one way or another a society of punching down, many jokes are targeted at women and minorities, the differently abled, trans people, etc. and a lot of leftists came from these same online circles as the right: 4chan, somethingawful, ebaums world, newgrounds, etc.” 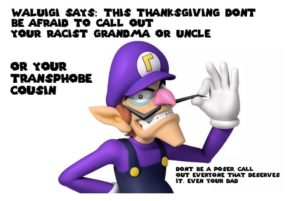 This experience with internet cultures reads through in the way the memes address its audience, when they break the fourth wall. While there are some memes that are just there for the love and inclusion of Waluigi, there are also some that make poignant statements about the political moment we find ourselves in and what our roles are within that moment.

“The left is starved for icons because we don’t have any contemporary ones, especially in the US,” Zigterman said. “Leftists have gravitated towards memeable figures that we can use as a kind of shorthand when communicating. We are finally finding our voice as a cultural force.”

The metaphor of Waluigi’s dismissal in Super Smash Bros. Ultimate hits a little too close to home especially in American politics. For some, not having the choice to play as their favorite purple-clad lanky Italian(?) is what it feels to not have the option of voting your conscience in either the recent Midterm election or the upcoming election in 2020.

“They will not give us Waluigi even though we’ve been asking for him,” a video made by popular video game political meme creator Art House Politics said. “Back when Obama started they gave us Wario, he used to be the joke character. There’s standards of moving forward, Waluigi should get his own game. If we can’t even get Waluigi, what is there?”