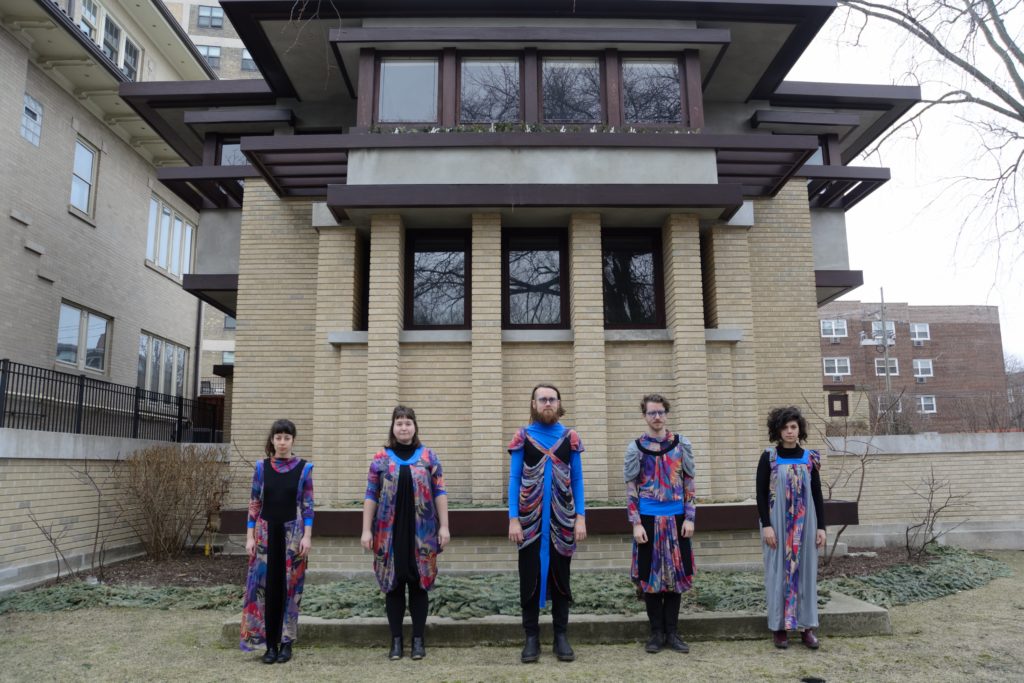 What Does it Mean to be in a House that No One Lives In? A Conversation with artist Corey Smith

On January 24th, 2019, Scapi Magazine met with composer, writer, and performer Corey Smith to discuss his experimental architecture tour: a performance piece titled “Essay on the Emil Bach House.” They also talked complexities of working with Frank Lloyd Wright’s and drawing inspiration from the Midwest.

Smith’s “Essay on the Emil Bach House” falls beneath his overarching project, “The New Prairie School,” which he began roughly five years ago. It is a multimedia umbrella encompassing an art book, stage show, an immersive performance at the Colven House, a series of performance interventions, videos, and an essay soon to be published in Belt Publishing’s Midwest Architecture Anthology.

The through-line between Smith’s “The New Prairie School” projects is their exploration of Frank Lloyd Wright’s theories, particularly his notion of organic architecture.

“I have a lot of beefs with Frank Lloyd Wright as a person and as a figure,” Smith said. “He’s a very complicated individual. I don’t love all his work, but I think he’s a great designer.”

While Smith aims to distance his “Essay on the Emil Bach House” from Frank Lloyd Wright’s grandiose reputation, Smith draws inspiration from Wright’s notions of organic architecture, which plays with the relationship between architectural form and landscape form. Wright’s Prairie style houses are designed to be long and low in an effort to reflect the immersive and sublime flatness of their Midwestern surroundings.

“When you’re talking about the landscape of the Midwest, you’re talking about things that are built in top of prairie, and all of the cornfields that are built on top of prairie, and all the cities, and all of the weird stretches of concrete that we’ve laid out,” Smith said. “So it feels really important. It’s really important when we think about the midwest to not just think about its contemporary incarnation, but also its historical incarnation.”

While Smith has conflicting feelings on Wright, he is deeply interested in reclaiming the flatness of the Midwest, something people use to insult the region, as inspiration. He is interested in Midwestern regionalism, in art that pulls from the profound expansiveness of the Prairie.

“I have this theory that there are three things people just know how to look at, and its fire and the moon and big water,” said Smith. “I think that the experience of looking at a horizon at Lake Michigan, I think the experience of walking in the prairie, are deeply connected ideas.”

Smith’s “Essay on the Emil Bach House” happened on February 9 and 10 at Wright’s Emil Bach House in Rogers Park. Starting tours at 1 p.m. and running through 9 p.m., Smith and a four musician ensemble gathered with audiences outside of the house to then lead them inside. “And there is where things get weird,” said Smith.

Once inside, the ensemble guided audiences through the house while playing music that was both inspired by and contradictory to the house’s story. There was also an unguided portion of the tour where audience members experienced the house on its own terms, in real time, “as if it were truly a house.” Smith wanted his audience to feel vulnerable in a way needed to build a relationship with the space, rather than to experience it as a cold, inanimate Wright artifact.

“It is my hope that this performance sort of reframes the experience of architecture and the experience of time and space, and allows all of us–myself included, but also the audience–to develop an actual relationship with the structure,” Smith said. “I’m a little bit annoyed with the institution of the architecture  tour, which I think provides a lot of facts and a lot of information but not a whole lot of emotional experiences.”

“What does it mean to be in a house that no one lives in?” Smith said. “I think this is a really puzzling question that is very true about a lot of Frank Lloyd Wright houses that exist in the City of Chicago.”

Perhaps one of the most puzzling issues of Smith’s process and performance is intentional fallacy: what is he and his audience to do with the jumbo image of Frank Lloyd Wright? More specifically, what are viewers to make of the Emil Bach House’s history?

Wright built the Emil Bach House in 1915, one year after his lover was murdered inside of his Wisconsin studio.

“Like I said at the top, I have weird feelings about Frank Lloyd Wright,” said Smith. “I think that he’s sort of a comically large figure, in part because he made himself a comically large figure. He was known for saying, ‘I am the world’s greatest architect,’ and proposing these truly grandiose projects, but this is something that’s truly larger than life that happened to him. And it happened to him the year before this house was built.”

Smith is interested in deconstructing the effects of this biographical detail. The house is quiet, introverted, and sits alone on a city block, which is unusual for a Wright house. Smith described the house as fortress-like, saying that inside he feels protected, as if he is in a sanctuary that shies away from the noise of Sheridan Road.

“It would be very easy to draw a line between these two events and be like: a grieving architect makes a grieving house. Which to a certain extent, I buy. That would absolutely impact you,” Smith said. “On the other hand, I also don’t buy it. That feels too easy, and it is constricting the house to the life of the architect and not vise-versa. It’s not allowing the house to have its own life.”

In turn, Smith said that part of his work is to interrogate the house’s history and what it means to inhabit it. Part of Smith’s work is to balance the figure of Frank Lloyd Wright with the vulnerable emotional experience he hopes to evoke from audiences. Smith aims to deny Wright authority inside of the house in order to make space for viewers own experiences, and for the life of the house itself.

“And to truly get the experience of being sheltered, which is, I think, the emotion that I’m trying to get at,” Smith said.