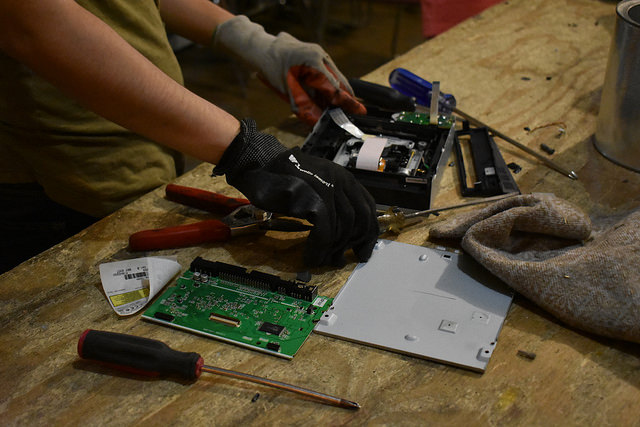 On February 4, 2019, Scapi Magazine met with Ken Greene to learn about the ethos behind FreeGeek Chicago’s computer recycling and selling practices, the moral and financial freeness of open source software, and what it’s like to volunteer at FreeGeek (spoiler, you get to learn how to build computers.)

Located in Logan Square, FreeGeek Chicago is a valuable community resource for people with small budgets who want to either learn more about computers, or to purchase a new computer.

“At the end of it I’ll tell you what that whole computer consists of, because this is actually gonna blow your mind,” said Greene. “I’m serious, it will blow your mind when you hear about what we have and how we configure it and what the prices are. Look at that, there’s a teaser for the latter part here.”

FreeGeek has locations across the continent in Vancouver, Athens, Minneapolis, and Detroit, but the original FreeGeek–the one Chicago is modeled after–was founded in Portland in 2000.

Greene explained that FreeGeek came to Chicago about 12 years ago when a group of out-of-work tech people noticed the Portland organization, a non-profit whose purpose was to keep computers out of landfills.

“The ethos there is ethical recycling. Nothing goes into the landfills, nothing gets swept under the rug. Nobody’s winking and nodding,” said Greene.

There are three tiers to FreeGeek Chicago, recycling and refurbishing being the first. Greene refers to this practice as their “green ethos.” The second tier is education, as FreeGeek teaches people how to use and build computers. And finally, there is the selling affordable technology tier, which Greene so kindly gives a teaser for above.

Responsible recycling is important to FreeGeek Chicago, because it ensures that junk won’t be sent to landfills in underserved countries where citizens cannot defend against trash piles toxifying their land.

Greene mentioned working with African journalist Mike Annone, who works to expose companies that send their junk to West African countries. In reaction to one of Annone’s photos, Greene confronted such a company.

“You can see the sticker on the piece of equipment. And they said, ‘we know nothing about this’,” said Greene.

He then helped the company navigate the ignorance that was (most likely, strategically instilled into choice layers of their chain of command to keep high officials in a safe state of plausible deniability) allowing this practice.

Though this business will probably find some new, innovative bureaucratic method to pretend they somehow have nothing to do with their own practices, we can trust FreeGeek Chicago.

“We’ll make sure to look at their upstream and their downstream vendors, suppliers and vendors, to see what they’re doing. They have to pass our test to make sure they’re recycling ethically and not just sending things to a landfill.”

However, FreeGeek doesn’t always recycle. When a computer donation still has potential for life, FreeGeek will refurbish it, and this is where the learning tier is relevant. At FreeGeek, Chicagoans can volunteer to build computers using refurbished parts.

“That’s why we use our volunteer labor. It keeps our cost down by using volunteers, but also it’s helping the community to learn,” said Greene. “We bring in people, and it doesn’t matter if they have any experience.”

If you should decide to volunteer as a builder at FreeGeek Chicago, you will begin with a (roughly) 90 minute orientation class, then observe and participate in “tear down,” the FreeGeek sector where computers are disassembled. When volunteers feel they understand computer components, they report to their “supervolunteer” for a casual quiz.

The next step is “testing,” where computer parts are tested for juice. Here, volunteers learn how memory works and how to wipe a hard drive.

Greene explained that wiping a hard drive can take up to eight hours, because at FreeGeek, they do not mess around. They use DBAN, “government encryption stuff,” to make sure all traces of data are erased.

After testing, FreeGeek gives volunteers a computer case that is completely empty aside from a motherboard and power supply, and they must use their knowledge to deduct what kind of memory the computer uses.

Volunteers then load operating systems onto the computers, “which is interesting, because we’re in a basement, there’s no windows,” said Greene.

What Greene meant by this impressive pun is that FreeGeek uses Linux instead of Windows (on Mac’s they have to use ios, as, of course, it is the only operating system Apple stuff can run on), because it is open source software.

“We do use the open source, mainly because it’s free. Free as in ‘free beer,’ but also free as in it’s ‘Free at last, free at last! Thank god almighty, free at last!’ You’re not bound by restrictive licensing agreements,” said Greene.

Open source software is free in two ways, that is financially and creatively.

“Linux is different,” said Greene. “They say, if you’re a geek and you know how to modify this, go ahead. We dare you. Feel free to do this. Do whatever you want with this.”

As many people are unfamiliar with Linux, another benefit of volunteering is being exposed to it via the refurbishing process. For those that aren’t volunteers, FreeGeek also provides affordable, public classes on using and modifying open source software.

Those who might be interested in these classes are people who have purchased their new, Linux-run computers from FreeGeek’s store, which aims to serve those who can’t afford buying a new PC or Mac for a spectrum of $300 to $2000.

“I can put you into a PC…and this is that teaser…we have things like an i5, i3…for like forty dollars,” said Greene. “I’m not talking just the processor, I’m talking the whole computer.”

For a PC with an i7 processor, customers pay as little as $130. For those unfamiliar with computer processors, that’s real good.

When talking about the FreeGeek store, Greene emphasized their effort to be a positive force in the Chicagoland community.