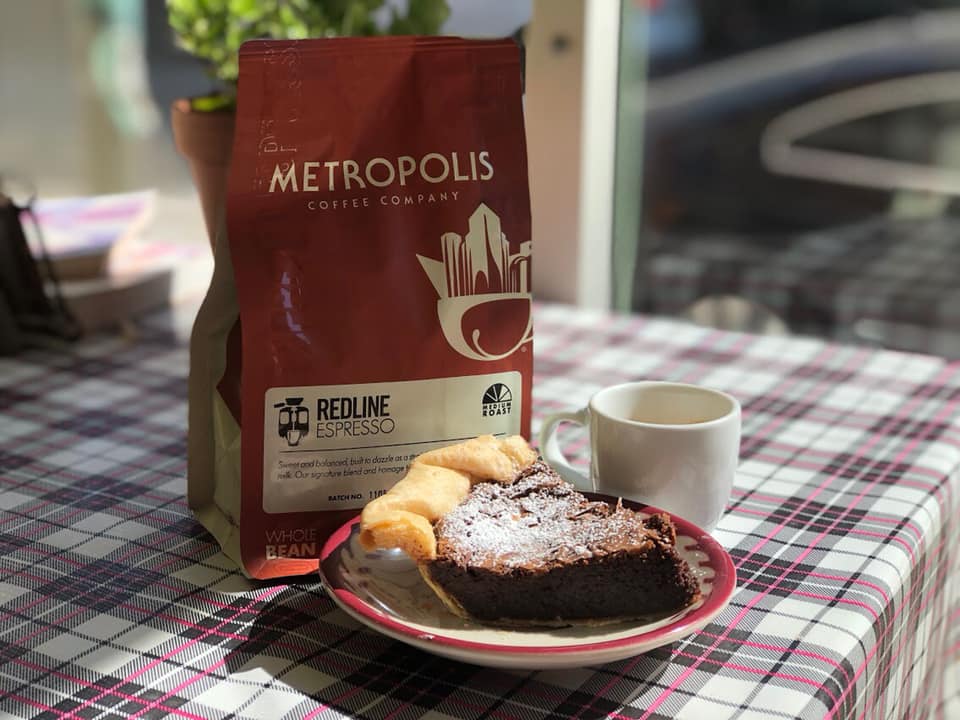 On November 18, Scapi Magazine sat with Carrie Shemanski and Chris Petrovich to talk the birth of Metropolis Coffee Roasters, making specialty coffee culture less intimidating for friendly and gentle and collaborating with other businesses.

The end of 2018 marked the 15 year anniversary of the delicious, blue-bagged coffee company Metropolis. Started by the father-son duo Jeff and Tony Dreyfuss, which Shemanski described as “scholarly and cooky characters,” the two shared an obsession with roasting.

Jeff, father of the duo, and linguist, was always the first at his local Seattle coffee shop. He eventually became such a regular, and asked so many questions, that the shop gave him an informal coffee apprenticeship.

Tony, the son, was a graveyard-shift cab driver who drank coffee to stay awake all night while studying philosophy at UW-Madison. After graduating, he worked at Peet’s coffee in Seattle, and all he and Jeff could talk about was coffee.

The two went to a coffee expo and bought a roaster, and in 2003 Metropolis opened to the public. Today, the company thrives on being friendly in that Midwest kind of way.

Petrovich was referring to that fear many feel when approaching the counter at niche, or single-origin, or specialty coffee, or just really good, coffee shops. Specialty coffee culture can be super intimidating and the baristas (though it may just be an insecurity-warped perception) standoffish. Petrovich emphasized that specialty coffee workers should know their stuff, while still being approachable. Or else, how will the industry succeed?

“Everything we do is about taking this amazing thing and being like, don’t you want this? Look how fun it is,” said Shemanski. “Because it’s fun, it doesn’t have to be so precious that you have to feel bad.”

Shemanski is the product manager at Metropolis, meaning she’s in charge of everything post-roast. This wide umbrella includes designing packaging to look as approachable as possible, hence the exciting blue bags mentioned at the top.

Metropolis is inherently inclusive, not just in its branding, but in its variety. They sell beans for all tastes, whether it be for light or dark, single origin or a blend.

“You might find another roaster in Chicago that might be selling the exact same coffee we have, and the way we roast it might be similar, but as a consumer you’re going to identify with a brand and a perspective,” said Petrovich.

“It’s kind of getting at that ‘great coffee for everybody’ kind of thing,” said Petrovich. “Just because you like super light coffee doesn’t mean someone who likes really dark roasted coffee is wrong. They can both be of high quality.”

Good quality is obviously important for a roaster to stand out, but even more important are the relationships it forms. Metropolis is also a wholesale retailer that acts as consultants for any shop interested in their coffee, especially brand new cafes with first-time owners.

“I think that added a bonus,” said Shemanski. “You’re going to get great coffee from us, but also, anytime, pick up the phone, a human being will answer and they will answer literally any question you ask.”

She mentioned working with a French-speaking shop owner from Quebec, which was a successful endeavour save one mistranslation where she wrote that one blend tasted like sand.

“Everyone’s got different, weird requests for what they want or how they want it, or whatever, and it’s really fun to try to meet those challenges,” said Shemanski.

Metropolis also provides free technical training to cafes buying their beans. This is obviously part of their collaborative ethos, but teaching baristas to make the perfect cup of Metropolis is also a no-brainer for the company.

“Offering that free training to our wholesale customers is both for their benefit and for our benefit,” said Shemanski. “We want anywhere you go in the city, or in the world, we want you to walk in and have Metropolis coffee and it tastes perfect.”

The only thing better than free learning is free coffee. If you love coffee but don’t want to pay for it, Metropolis is accessible in that way, too, because they offer free tours and tasting (or a “cupping,” as pro coffee people might say).

Every first and third Friday, Shemanski and Petrovich lead tours of the Metropolis roasting plant. Literally all you have to do is reserve a spot on their website and make sure you’re free at 1:00 P.M.

“That has been so fun for us–because we aren’t necessarily customer-facing in our roles here, because we kind of work back of the house–to bring people in who have either heard of Metropolis or maybe sometimes haven’t heard of Metropolis and just like coffee, and physically show them what we’re talking about,” said Shemanski.

“I took a class in college for public speaking, and I hated it, but I love doing this,” said Petrovich. “One of my favorite types of tours is when people have wild or weird questions, even if they’re not related to coffee. We’re really just standing around, talking, having a conversation, drinking coffee. That’s really what it is.”

Metropolis, especially Shemanski, thinks a lot about how they present themselves. Until six months ago the company didn’t have a sales team, and they still don’t have a marketing team, yet they’re unified in their goal to be approachable and inclusive. Jokes can help that.

“We always refer to ourselves like a family, and it does feel that way sometimes,” said Shemanski. “I always felt like we could present that better to the world. Our coffee is delicious, but also really cool people are roasting and packaging it.”

Also, some quick tips from Petrovich and Shemanski about home-roasting green coffee:

Listen to the full interview here, or check out how to book a tour here