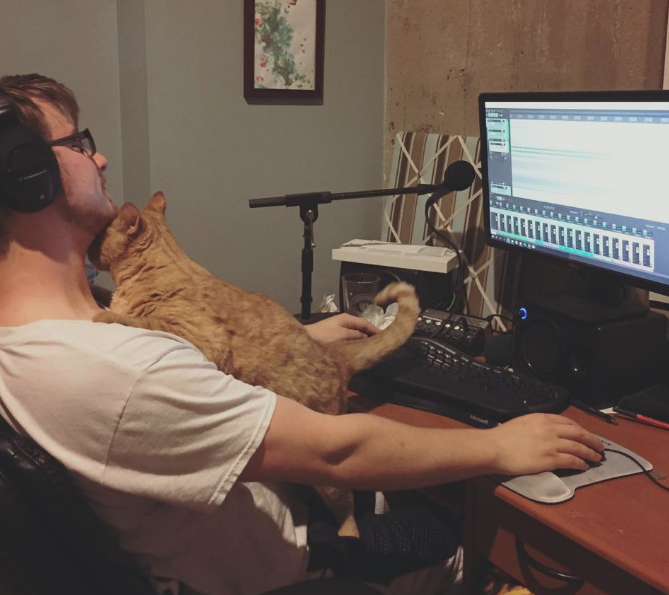 Adding a Third Dimension: A Conversation with The Local Glow host Tariq Shihadah

On January 23, Scapi Magazine met with Tariq Shihadah, host of The Local Glow podcast, to talk about the intimacy of local music scenes, the transition from solo work into working with a production team, and weaving a thread through diverse art communities across the Midwest.

A University of Illinois graduate and transportation engineer, Shihadah is also a passionate musician and podcast host. The Local Glow explores human experience and creativity by interviewing artists from different communities, even as small or niche as a single family’s hymn singing practice.

“What the podcast is about is exploring different experiences of community through strange and obscure and beautiful music and art and poetry culture, on all sorts of scales,” said Shihadah.

The Local Glow’s first season focused exclusively on local music scenes. Shihadah is a musician himself and began his experience in Rockford’s DIY scene. In early high school, Shihadah and friends started a post-hardcore band, which they also described as pirate rock.

“So we were kind of cool, I guess,” said Shihadah. “In retrospect, we weren’t really that good, but that’s okay. It really got me deep into the local music community experience, and I’ve never been the same for it.

Rockford’s music scene inspired Shihadah primarily with its intimacy. At house shows, there was a literal lack of distance between him and performers. Being able to converse with musicians, and even just to see their faces closely and clearly, gave Shihadah a deep appreciation for local scenes.

“There are people with stories who are just right there, and they’re so ready to talk about it because that’s like 50 percent of what music is,” said Shihadah. “It’s like putting yourself into notes, into this tangible experience.”

Shihadah described Rockford’s scene as “very weird.” It was, in some ways, a mess and a culture pit whose music scene was, according to Shihadah, “insane, simple, close, intimate, grimy, slipshod, and barely put together,” all at once.

There were a couple monthly shows in strange church basements or abandoned park lodges, that would usually end with artists being banned from using the space again. The scene was, along with all of Shihadah adjectives, delicate.

“It was a mess, but we just kept on putting it back together. There’s a weird resilience about it, I guess,” said Shihadah.

Something Rockford-esque that Shihadah wished he saw in Chicago was its dedication to keeping the scene alive. It may be smaller and more fragile than Chicago’s scene, but with that comes more teamwork.

“We need everybody on board to really make this scene glow and make this community feel like the most real and the most bright,” said Shihadah, unaware that he used the word “glow.”

The Local Glow is on board. Shihadah records his podcast to put faces to communities and tell the stories behind the music, writing, and performing that feeds our senses and our inspiration. In a sense, The Local Glow’s purpose is to tear down the fourth wall between audience and whatever media or community it’s exploring.

“Just because everything means so much more when you see the face of someone who’s doing something,” said Shihadah. “It immediately just throws on a third dimension to everything that you’re hearing and all of the art that you’re ingesting.”

Coming from Rockford’s comparably small scene, Shihadah also wanted to make Chicago’s massive art world more navigable for those looking for places to explore, but also to belong to.

“I think it was sort of a looking outwards to help myself learn how to feel comfortable and how to feel engaged and excited about a community that you’re a part of,” said Shihadah. “To bring it there, I think it was a lot of fear and distance that I felt from what’s happening here that played into the podcast.”

Postcasting is the medium through which Shihadah most naturally ingests ideas, and an incredible medium for the type of sharing Shihadah aims to do. It allows him to give backgrounds and introduce people, while allowing listeners to personalize how they receive information.

“You can meet someone in your ears and you just create them in your head, and that’s one of the levers of storytelling that I try the most to pull through our podcast,” said Shihadah.

As far as who Shihadah invites onto the podcast, he tries to interview people who have visions for themselves as artists. However, what is most interesting to Shihadah as a storyteller is externalised passion for being the glue among small spheres, for affecting the microcosmic community they act within.

“Where you have a vision for yourself, but even more you’re looking at what impact what you’re doing can have on the people around you and your community,” said Shihadah. “I think the best artists that I know in town are the ones that radiate this spirit of the city, and they are proud to be where they’re from or their music is intended to serve where they’re from.”

There is nothing wrong with a musician whose ultimate goal is to make it onto a Spotify playlist, but Shihadah is especially inspired by artists who have “intention for the things you’re a part of, as opposed to trying to exit.”

For The Local Glow’s second season, Shihadah brought on a production team that he described and being both “the bees knees” and “fabulous.” He was slightly hesitant to give up some control, but doing season one alone was “a bad choice,” and he quickly found help.

Shihadah posted on Facebook that he was looking for a production team, and soon connected with three talented people, among them a local musician Brian Doherty, social media savvy producer Victoria Thomas, and an audio engineer Fredd Villa.

“I was like, why is this happening? Why are there people interested, who are bringing these amazing skills and this interest and passion that is equal to and sometimes greater than my entire day’s,” said Shihadah. “They bring a unique vision and unique angle, and unique communities, as well, that they know about and are familiar with.”

With more brains involved, Shihadah’s podcast is evolving, and there is more brightness and intention in each story than before. He compared the transition from solo podcasting into collaborative work to his experience as a musician. Discoverer, too, began as a solo project.

“It just blew my mind what could happen when you bring more talented, incredible brains into your space. That was a good lesson.”

Along with being a good lesson, collaborating to create The Local Glow is also in line with the podcast themes. It was hard for Shihadah to let some of the production process out of his hands, but he expected it to be harder than it was. Though more brains means more weirdness and unpredictability, it exposes, like the podcast itself, listeners to something created by multiple perspectives and angles.

Though it’s hard work, Shihadah and his team will continue exploring Chicago’s local scenes through season two, and onto a season three.

“I feel lucky to be able to create the space, and to meet people, and to weave a thread, like, one lone thread, through this insane and huge space of Chicago and of the Midwest at large,” said Shihadah. “Just weaving a thread through different groups of people. It creates a crazy map.”

Listen to The Local Glow at Shihadah’s website, or on Spotify. Also, you can hear the full interview here on Scapi Radio.