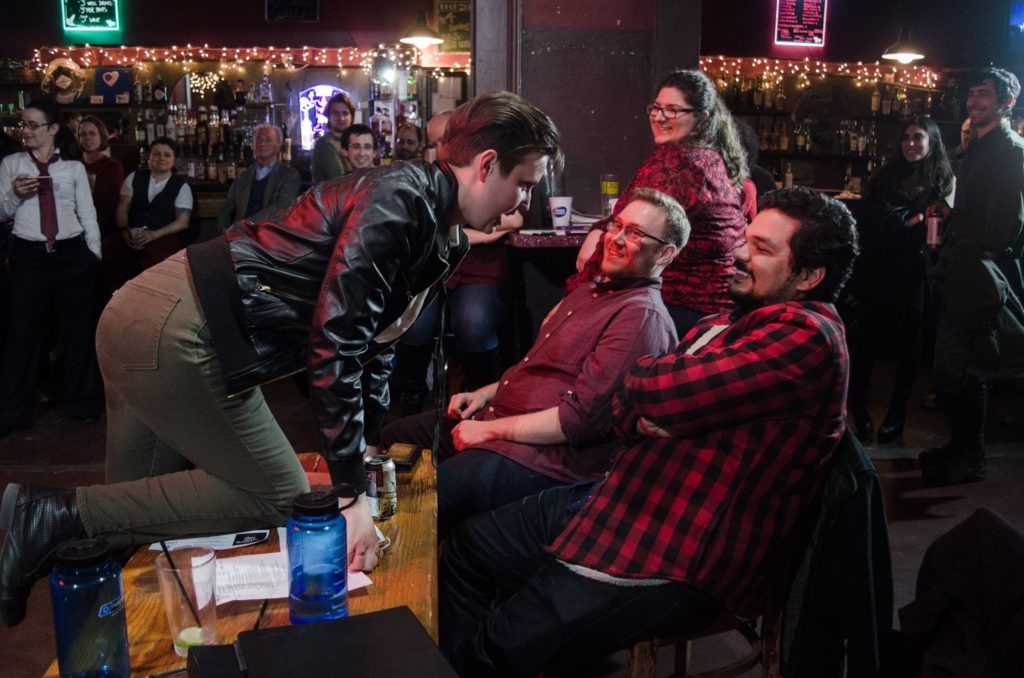 Programming and Producing Opera for a City of Neighborhoods: A Conversation with Opera on Tap Chicago

On October 17th, 2018 Scapi Magazine sat down with Marysa Abbas, Sam Attaguile, and Joshua Louis Smith from Opera on Tap Chicago and talked about building a community, what it means to always have work to do as a singer and producer, and .

Opera on Tap was born in Brooklyn, NY before heading it’s way to Chicago and many more places. Louis Smith, Attaguile, and Abbas all tell us what Opera on Tap is and what it does.

“Opera on Tap is a now international organization with chapters all across the states and through G and what Opera on Tap does is performs opera in a variety of methods whether its scenes or etc in non-traditional ” Smith said.  “Typically for us, it’s in bars and so we’re the Chicago chapter and we perform in a rotating number of bars in the neighborhoods of Chicago as well as have outreach events and we even help produce a opera.”

“It’s basically like an Opera-Cabaret in a bar and we interact with you.”

As a sort of hub for bar activities and events, Chicago bars are a home to many artistic platforms. (name here) talks to us about why Opera on Tap sets itself apart from the rest.

(55:58) “We take Opera out of the conventional space and bring it to the people. Opera on Tap is meant to become more accessible to people who have never seen opera or are not familiar with it.”

Coming from the musical background and experience, (name here) speaks on the number of people who are opera virgins before going to see a show and what that looks like from the eyes of a singer.

“We forget, because we’re just wrapped up in the singer world, that regular civilians everyday non-musical folks, some of them have never heard opera at all, let alone live, let alone 10 feet away from you, by classically trained voices and at times we do very angsty things,” Abbas said.

While opera isn’t a new trend, Attaguile opens up about the way different companies handle the business and how Opera on Tap does it and why they do it this way.

“I think storefront companies the whole, all of it seems to be going in this direction,” Attaguile said. “A Lot of newer music is being produced and a lot of things are happening in very unconventional spaces. I mean flash mobs are a thing of a few years ago but that was a thing. At the same I also think that the upper echelon of companies are not getting the memo and I think it’s to their detriment because almost every big company like that does lose me on a show. The fact of the matter is, they’re putting on how many performances of West Side Story because they’ll fill those seats? So I mean it’s a huge thing, it’s a huge production and money. It’s up to companies like us, to specifically cultivate those audiences because a lot of times we’re just pulling from the same barrel.”

Having such a unique venue for Opera on Tap, Louis Smith talks to us about the similarities between Opera on Tap and other companies doing the same kind of work for the same reason.

“What I find so interesting about some of these companies is they’re focusing on what we’re also focusing on is: emotional ” Smith said. “And I think that’s one of the things that sets Opera on Tap performances apart in a way that you couldn’t do it in an opera house. It’s just a different beast.”

Mixing work and pleasure, Attaguile shares the main reason people sign up for Opera on Tap.

“People do Opera on Tap because its fun,” Attaguile said. “They do it for themselves. They’re not doing it for a paycheck. They want to sing or they want to do that theme or ‘Oh my God I have a great idea for supertitles’. It’s totally masturbatory in a way. I’m not saying it’s bad, but ultimately you’re doing it for yourself.”

Finding a balance between work and fun, Attaguile talks to us about the different roles each of them play in the programming of an opera show.

“There’s four of us, so I mean we all kind of have our designated things and when somebody’s in a show or out of town the rest of us can pick up the slack.” Attaguile said. “It’s taught us to work on the fly. At OoTober Fest it’s all hands on deck.”

Breaking it down for us, Abbas tells us exactly what each person does while getting ready for OoToberFest and how it all works.

“If you want to break down I mean, Sam does social media for that. Josh does some of that as well. Josh progammed a fantastic show this year.” Abbas said. “I’ve done a lot of the silent auction stuff. We all do part of that. Each month somebody different programs the show.”

Being both a volunteer and administration, Abbas talks to us about the difficulties of time management while working on a project like this and why she ultimately does what she does.

“It’s a lot and yes it’s one thing to be a volunteer and you’re singing but we volunteer a lot of our time to do this and it’s because we care about Opera on Tap,” Abbas said. “But , I feel like we just care about opera and just want as many people to be exposed to opera as humanly possible.”

Listen to this Scapi Magazine episode here and learn more about Opera on Tap on their website.