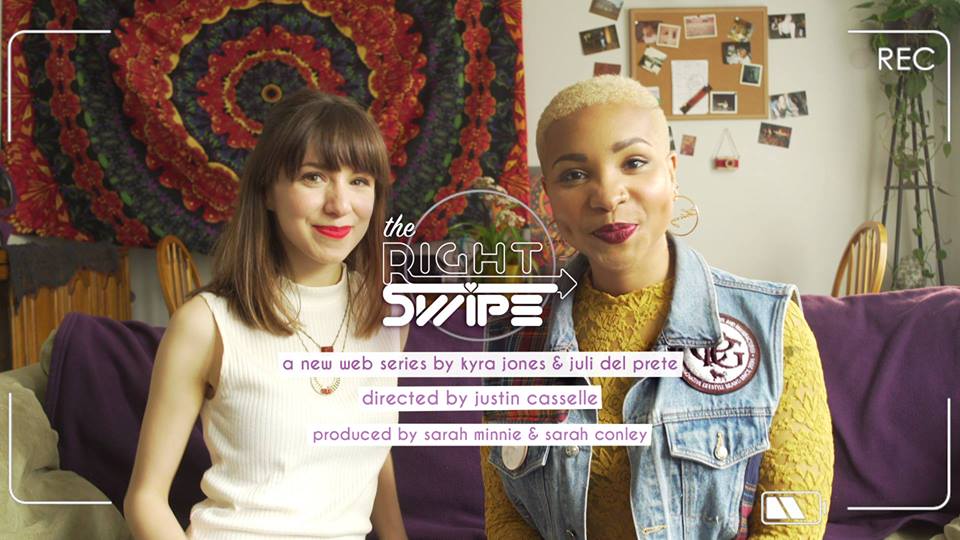 Intersectionality for You, Me, and People You Meet on a Dating App: A Conversation With Kyra Jones and Juli del Prete

On March 29th, 2019 Scapi Magazine sat down with Kyra Jones and Juli del Prete of The Right Swipe to talk about ideas turning into reality, our most memorably (bad) dates, being intersectional in the world of online dating, and a quick five of must-avoids in your dating profile.

The Right Swipe is a web series written by Jones and del Prete circling around men on dating apps how to fix their flaws on them.

“The Right Swipe is a web series. It’s an intersectional feminist romantic comedy about two friends who start a business where they fix men’s dating profiles and then they end up fucking their own love lives up in the process.” Jones said. “I think of it as a feminist flip on like the traditional matchmaker rom-com.We explore race, gender, sexuality. And we’re very excited to have people see our Pilot soon!”

While reminiscing on the past, del Prete talks to us about how the idea for The Right Swipe came to be and how it developed into what it is now.

“We were hanging out one cold night in January 2018 and we had some wine and we were swiping on Bumble.” del Prete said. “Then we were noticing how men didn’t know how to present themselves on these dating apps like taking selfies below the chin and just writing these bios with no information. I’m a photographer for my day job and Kyra and I are both writers and we were like ‘oh my god we could make so much money if we started a business where we consulted and fixed these guy’s profiles’. But then we were like ‘no then we’d have to interact with actual men. So what if we wrote a web series about two girls that do this instead?’”

Considering both Jones’s and del Prete’s backgrounds in writing, Jones talks a little bit about her writing process through the beginning of The Right Swipe.

“Julie and I are just such fast writers that we’d write an episode in like a night and we were really excited about what we had so we started reaching out to other filmmakers who could help us make this happen.” Jones said. “Luckily the story and the scripts connected to people to the point where it was very easy to find people who wanted to be involved.”

Knowing that funding for a film project won’t be easy, Jones tells us how they got the funding for the Pilot episode and how she plans to continue to raise money to keep the camera rolling.

“We are still in production. We ran out of money because shooting is expensive, especially when you’re paying all your artists. From the very moment of the conception of the series we told each other ‘we’re paying people for this. We will not make this until we pay people.’ It’s more important to us to compensate people that are working on this particularly because our whole crew is women and people of color and queer and trans people. Those are people who are typically underpaid. We got an amazing grant from Chicago Digital Media Production fund which was $14,000 for the pilot which seems like a lot of money but it’s not.” Jones said. “We also crowd funded $25,000 which was the most painful experience of my life and we got $1,000 from O-TV which is the platform we’re distributing from. So now we’ve produced the pilot and about half of the rest of the five episodes we still need to raise money to finish.”

Finding what’s important to them, Jones and del Prete wanted to amplify people of color, women, and queer/trans people by hiring them onto their project. Jones tells us why.

“Our producers are both women of color and I think that’s key,” Jones said. When we were putting a team together it was super important to us that the characters that are represented on camera with intersectional identities are also represented behind the camera. We’re not like making visible something that we could not put into practice. I think that a lot of the excuses that I hear from people not hiring women and not hiring queer and trans folks and not hiring people of color are like ‘where are they?’ like there are so many and they are in Chicago and our producers put out the fucking bat signal and they slid into peoples DM’s and really went the extra mile. It was a joy to hire and pay them and see them elevate our work.”

Taking it back to the most memorably (bad) dating app dates, del Prete opens up about never being on a dating app until recently.

“I had never been on a dating app, for most of the process of creating this show I was in a fairly serious committed relationship, and I had just never used one.” del Prete said. “A very recently I had went on my very first dating app date and the guy I went on a date with was like ‘so I’m your guinea pig, huh?’ We didn’t go on a second date.”

Being no stranger to the bad dates via dating apps, Jones tells us about a particularly weird dates she struggled to get through and some that made stronger connections that she thought possible.

“ I’ve been on many many dating app dates, I actually met our director on a dating app.” Jones said. “We went on a date and nothing came of the date, we moved on with our lives and ended up following each other on social media and something that he had produced came up on Instagram and I was like ‘Juli!’ like this is what we want the show to look like. I have some weird stories, like if you watched the teaser, my character says something about how she went on a date and the guy locked her in his car and performed his mixtape for her.” Jones said. “That happened to me in real life it was very weird.”

Sharing some tips and tricks, Jones and del Prete share their five DO-NOT’S for dating profiles.

“First, Below the chin selfies, like why? It gives you multiple chins, it looks like you’re trapped in a well. Second, people who have a bunch of group photos and no individual photos. A nice third one is, photos with girls who aren’t related to you, like do you want a third? Are you not over your ex? What’s going on here? Fourth, like underwritten bios. I feel like a lot of men don’t write a bio or just write something so generic. The last one, choosing unflattering or boring photos. Like I know you’re more attractive than what you put on your profile for people to see.”

Listen to this Scapi Magazine episode here and learn more about The Right Swipe on the OTV website. Also visit this page to donate to their fundraiser.