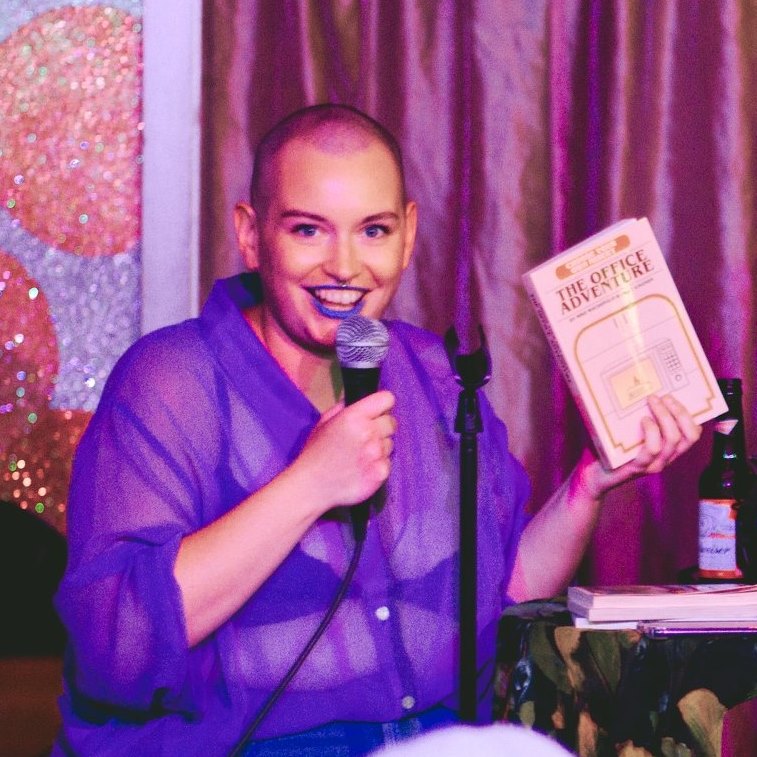 Inside the Mind of Mar: A Conversation with Mar Curran of Choose Your Mar Adventure

photos from the Choose Your Mar Adventure Facebook Page

On October 3rd, 2018 Scapi Magazine sat down with Mar Curran of Choose Your Mar Adventure and Burly at Burlington bar to talk all about niche programming, building community from the ground up, and being pulled to Chicago.

Choose Your Mar Adventure was started April 9th, 2018 as a way to have Chicago locals come and enjoy the mystery and thrill of choosing their adventures at Beauty Bar in Chicago.

“It is kind of a queer talkshow/fantasy adventure show.” Curran said. “What we do is we have local artists, activists, community organizers, come on to the show and we do a little interview with them, then we do a 15 minute choose your own adventure marathon with all different kinds of books from that genre, try to see if they survive, and if they do survive 15 minutes they get a prize from the prize cauldron.”

Reminiscing on the things that matter, Curran talks to us about how they came up with the concept of Choose your Mar Adventure.

“I had a really bad bout of writers block a couple of years ago and I was like ‘I gotta go back to basics.” Curran said. “What made me love writing in the first place?’ It originally started because I started to do my own choose your own adventure that I wrote at Salonathon so people really started to respond to that.”

Looking to create a space and environment where people are out of their element, Curran tells us a little about what drew them to the idea of curating their show.

“I really like seeing people in an environment that is not normal to their lives and that they’re on stage and being asked ‘what would you do?’” Curran said. “And just being able to have all my friends that have really cool projects and people who I have secret art crushes on go on the show and be able to promote their work, it feels really cool.”

Creating a specific niche product to fit their targeted audience, Curran talks to us about why they chose to go the dark-humor route with their show and what sparked the whole project.

“I think that with this show specifically I was putting out similar enough niche products as far as my art. My last Salonathon performance, I designed a board game that was based on my suicidal ideation and had my best friend play as me and I was death and we competed against each other.” Curran said. “But I think people knew what I was kind of about so it’s easy to be like ‘Hey this person does this really weird dark humor stuff and you guys are going to be into it so we should go see this specific thing.’”

Wanting to showcase their own openness and honesty in the show, Curran delves into what kind of audience they were looking to put the show together for.

“ I knew what I wanted the show to be and I knew what kind of people I wanted to have in that audience.” Curran said. “I definitely was trying to have a very specific vibe which is weird for me because pretty much what I’m about as a human being is a radical honesty and vulnerability.”

With the stress of trying to put together a package for audiences to latch onto, Curran tells us how they deal with that and how they overcame the doubts of that process.

“I do a crap ton of meditating, so that helps a lot. I think as someone whos had a career in Chicago for performance and writing, having already made a product that I didn’t like and sold that product and having to deal with the repercussions of that, I feel like now as a human being I feel more aware of where my own boundaries are with that kind of stuff.” Curran said. “I feel comfortable with the package I put together and that’s being honest to where I’m at that it doesn’t feel as weird as it could be.”

With the help of Beauty Bar allowing them to put on their show, Curran tells us about how the show came to be at Beauty Bar and how accommodating they have been.

“I think that they have shown a real dedication and active pursuit of having art in it’s space. I think it’s super awesome because they could just as easily turn Monday night to a 80’s night.” Curran said. “They just put in so much work to try to be not only accommodating but just that extra step beyond. They convinced me to do the show there and not me convincing them.”

Juggling more than one project at a time, Curran talks to us about their other show, Burly hosted at Burlington Bar.

“Burly is one of the queer nights at Burlington Bar in Logan Square and Fullerton. It’s every third Wednesday of the month. We just play a lot of cool tunes.” Curran said. “I think that a lot of other queer parties are more dance focused, we’re more just a reason to make your friends leave their house and meet up with you and have a drink focus. It’s kind of a chill night.”

Having so much to take in and learn from, Curran tells us what they have learned throughout this whole process of community and audience building and what it means to them to be a queer artist/activist through art at the end of the day.

“I feel like if anything, the thing that I really learned is a new sense of hope. It’s really hard for me and other people to feel like things will be okay in this point of history.” Curran said. “It’s good to talk to people who are able to express ‘yeah sucks, but also here’s the thing that I’m actively pursuing to make it better and to be able to uplift those voices.’ It feels really powerful and I feel like sometimes, that’s what gets me through the day.”

Listen to this Scapi Magazine episode here and learn more about Mar Curran and Choose your Mar Adventure/Burly on their website.