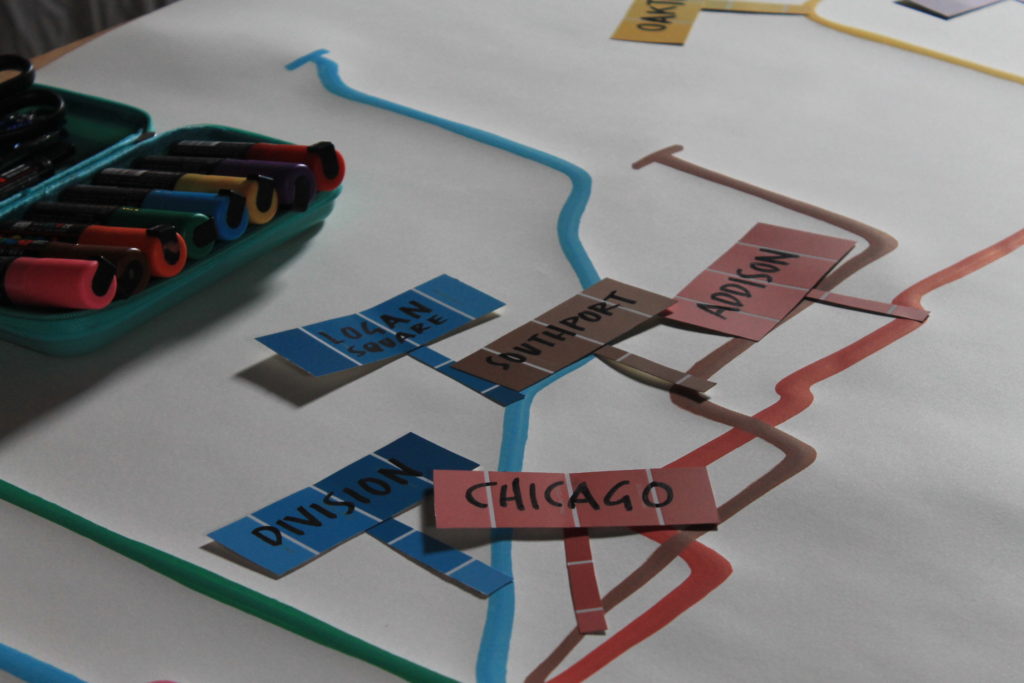 Division the Street and Division the Film: A Conversation with Cara Winter and George Ellzey Jr.

On October 23, 2018, Scapi Magazine talked with Cara Winter and George Ellzey Jr. about co-writing, directing, and producing Division The Film. The two detail urban and emotional themes, how Chicago’s layout and disappointment in the film La La Land inspired them, and the humble experience of being first-time filmmakers.

Division The Film is about an interracial couple who find themselves in a long distance relationship, despite both living in Chicago. Really, it’s about living in a big city, and how the city itself can impede people.

“Geographically that’s just the way the city is. If you don’t live in the same neighborhood, it’s like you’re in a different country,” said Ellzey Jr.

The film is timely, it emphasizes real effort in a decade of instant gratification. It parallels internal struggles with the external, like the near-2020 normality of ordering paper towels to your door with an app.

“I do think, too, that it’s hard enough to get to work, whatever your commute might be, and then to step outside of that and go to someone else’s side of town to see them, you know, I feel like that’s a lot of effort,” said Winter. “We live in a super, come to me, easy-peasy, instant, everything delivered to your door, everything’s online, society now, and making an effort is a thing.”

To travel to somebody’s neighborhood is to interact with city obstacles. It is taking two buses and arriving with wind-flaked skin and snow-soaked socks. The film shows two people making this effort because of their core desires, contrasting their subjective experiences with the layout of Chicago.

“So what we tried to explore was this idea that two people could make a really instant, very deep connection, like ‘I get you in this level,’ but then all these external things, that isn’t part of their core being, is what’s dividing them,” said Winter.

Chicago separates the couple physically, but their identities, too, are evident dividers. The protagonists in Division The Film are Camila and Michael, and they further the themes with their similarities and differences. They’re both math geeks, but, culturally, they’re different.  They live in different neighborhoods and function under different economic tiers. Camila is a new business owner, Michael a wealthy tech-guy. She is a social butterfly, and he has social anxiety.

The idea for Division The Film came from Ellzey Jr.’s dissatisfaction with La La Land. The film’s lack of diversity inspired the idea for an anti-La La Land, and the two began writing a diversely-casted musical.

“It’s just reinforcing our big point, which is that we’re all part of the same, human family,” said Winter.

They decided that creating a musical was too complicated a feat, but the two continued to develop a script with the principle of inclusion.

“The integration of more identities, ethnicities, into those top tier productions is what should fundamentally change,” said Ellzey Jr.

Division is the perfect street to feature in the film, because it really does work as a dividing socioeconomic line in Chicago. The film’s cast and crew diversity, plus the interracial main characters and urban setting, calls to audience minds issues of identity in Chicago.

Chicago is known as the most segregated city in the US. There are and have always been landlords who refuse to rent to people of color. When African American people began migrating to Chicago from the South, only certain, non-racist landlords would have them. This is part of the reason Chicago has enclaves for different races and ethnicities, as minority groups could only rent in specific areas.

People settle near their own people–“my cousin lives there, you should move there, because she says it’s alright.” The discriminatory infrastructure that confined generations of cultures to specific areas birthed the most segregated city in the US.

With identity and different neighborhoods in its plot, Division The Film also calls to mind issues like gentrification.

“I live in the South Loop, and then Bronzeville, it’s changing, it’s like, wow, I see other races, which is fine, but, it’s like, where are my people?” said Ellzey Jr.

Both Ellzey Jr. and Winter are first-time filmmakers. Prior to Division, Ellzey Jr. had some production experience, and Winter did some screenwriting and play directing. After hitting it off working in the same “choose your own adventure play,” they decided to combine their skills and gather a film team.

“Even though we’ve both been on film sets before and we’ve produced or written for the screen, we had not ever directed before,” said Winter. “It really was like a concert between the three of us.”

The third person Winter was referring to is their cinematographer Leo Fallucca, who “really guided us as first time directors,” and was a major rock in Division The Film’s creation. Collaboration was key for making the film, and the two felt lucky to find people in each role who knew what they were doing and help with the learning curve.

“I think that’s the beauty of Chicago,” said Ellzey Jr. “Everyone, well, the people that I’ve come in contact with, are very welcoming and ready to collaborate with other people. Especially if you’re doing something of quality.”

Moving into their new roles meant setting their egos aside and trusting the guidance given by their production team. Making their film has largely been about admitting, “I don’t know.”

“All of these arts are very collaborative, you’ve got to check your ego at the door,” said Winter. “I’ve been in lots situations where there were very ego driven productions, and I’m watching the director and, I’m like, this is not a great situation. It’s demoralizing for people.”

In late October, the last time we spoke to the Ellzey Jr. and Winter, the film was in post-production. Ellzey Jr. and Winter were sifting through footage, editing scenes, and layering sound. The two were 75 percent through the rough cut, and next step was more notes and more review, particularly using feedback from an LA editor who’s been consulting (or “annihilating,” as Ellzey Jr. phrased it) on Division The Film from the start.

The plan, once finished, is to submit the film to as many festivals and online platforms as possible.

“When you direct a play, the play then has its own life, in a way,” said Winter. “It really exists outside of you, as the director, and at a certain point you’re out of control of it. It’s living and you’re just watching and giving little, tiny notes. With film, I think now that we’re in the post production phase where we’re editing stuff together, it’s yours. It is not living outside of you. You’re deciding every little moment.”

Listen to the original interview here