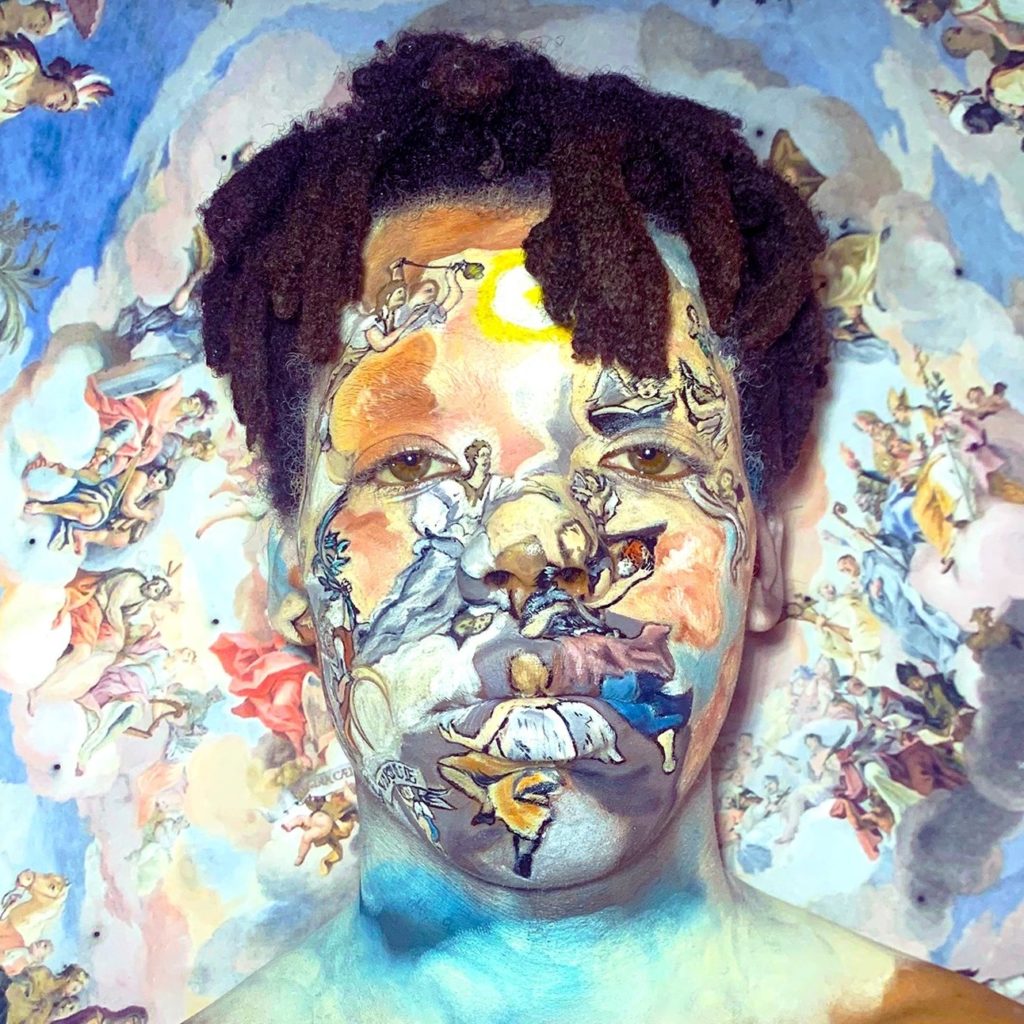 When Virtue began recording his album Post Faith Dialogues, he was depressed and anxious.

“I was just a mess all the time. I wasn’t, like, showering or cleaning anything,” said Virtue. “Which I’m sure is very relatable, but I sort of lost my job very viciously. On my part. Where it was just like, I can’t do this anymore! I freaked out and stopped and quit immediately.”

He used his newfound free time to hang in his pajamas and record music. This creative time began as a self-care routine, but transcended into self-exploration.

“It was a self care thing for a while, but then it sort of became this way of dealing with blackness in the context of christianity, and sort of finding myself through that,” said Virtue. “It was kind of just a way of solidifying my rebellion against a lot of traditional ideas that i’ve been raised with”

And non-traditional ideas, too. Virtue also described that recording his music was also a rebellion against ideas he had adapted from abusive or problematic relationships.

“I have been shedding those ideas little by little over the years, and after a certain point, I kind of just didn’t have anything left,” said Virtue. “So, I was like, what do I build up from here?”

Recording Post Faith Dialogues was a process of disassembling and restructuring everything Virtue had come to believe. He described the blank personhood that followed as transcendent or post-faith (ding ding), and paralleled this feeling with the positive note that listeners will hear at the end of his album.

Post Faith Dialogues began with Virtue alone in his pajamas, but he agreed that collaboration is a large part of his art.

“It’s almost like the artistic manifestation of, ‘I really need to get out of my house,” said Virtue. “Or, I really need to continue to interact and connect with people, because it brings out a different energy, a different aspect of myself that I might be neglecting and letting build up.”

Virtue is part of four projects, including Not Lovely, which Virtue could best describe as an experimental, hip-hop jazz group. He’s also in UDABABY, which is a collaboration with his best friend Davis Blackwell, who raps under the name Davis.

“I think we described it on the bandcamp thing as like, anthemic diatribes by and for black nerds everywhere,” said Virtue. “I produce much darker material for that. It’s not as melancholic, I would say. It’s just more, like, ‘fuck-youish,’ which I like. I think ‘fuck you’ is the nucleaus that holds the planet together at this point.”

The collaboration Virtue seeks has to involve two things: mutual purification and love. He described his collaborations as a “gravity well of love,” because in creating something with someone, you learn to love them more deeply each time. Plus, you can’t collaborate with someone unless you have a sort of deep, mutual devotion and harmony.

“I don’t really collab with a lot of people. There’s a very select few–this is going to sound horrible–but almost, that, I find worthy. I really do believe in my art form as a powerful and purifying force on this planet, which I think  anyone should if they’re putting their heart into it,” said Virtue. “When I use that word [purification], I think I mean it as sort of a full actualization of self without boundaries and without limits, but still incorporating a sense of love and interconnectedness.”

He’s also in Free Snacks, a collaboration between him and Ruby Watson, the only white-dude rapper he has ever, and probably will ever, fuck with. Being in so many different projects, a large part of Virtue’s art is the idea of ever-shifting identities.

“People and emotions and mental headspace and an identity can change moment-to-moment. Like sexuality. I mean, we’re all the product of a multitude of cultures, no matter how you want to say it,” said Virtue. “Depending on what you’re wearing and how you do you hair and who you interact with on a daily basis, you’re constantly shifting and molding different parts of yourself, I believe. Or at least I am. Depending on who I’m around, I would say I become a very different person.”

As with shifting identity, Virtue’s work also concerns exploring and presenting his identity, and the many facets of black culture–especially as a marginalized person who is working to “shimmy out of the chains of oppression” (he apologized for the cliche metaphor).

Virtue was raised in a “semi-christian” household, by a Jamacian mother who, to a certain extent, encouraged him to look down on US black culture.

“I’m constantly redefining what the culture means to me and how I can work with it. Because a lot of Jamacian christians end up looking down on Black American culture, because they come here to assimilate and redefine themselves in the context of America,” said Virtue. “I’ve had to reconcile my relationship with Black American culture, because I was taught that that was–you know–you shouldn’t promote that.”

If Virtue were to give his past self a word of advice, it would be to slow down. Some people, Virtue explained, come out of the womb knowing who they are, but not most of us.

“The time you take to explore yourself and figure out who you are is very important. It’s important to do that for yourself,” said Virtue. “What is authenticity? What is it to be a real person?”

Since releasing Post Faith Dialogues, Virtue still hasn’t re-listened. He’s a perfectionist who struggled with the emotional feat of making his work public, but the feedback he’s been receiving is positive. It’s funny, he explained, that audiences feel so much joy and energy from tracks recorded during his dark states.

“I’m fucking like half-crying on shit and talking about how fucking sad I am, but I also can channel aggression into my sadness and reframe that so it becomes something beautiful,” said Virtue. “The point of this is to dismantle what black masculinity has been confined to, and I think I’m doing a good job, at least for the people that hear me.”

Virtue doesn’t believe in anything now, but he has more faith in himself, in his community, in the people around him, than ever before. “In that people can change, and that love is real and not just a stupid word that The Beatles fucked up,” said Virtue.