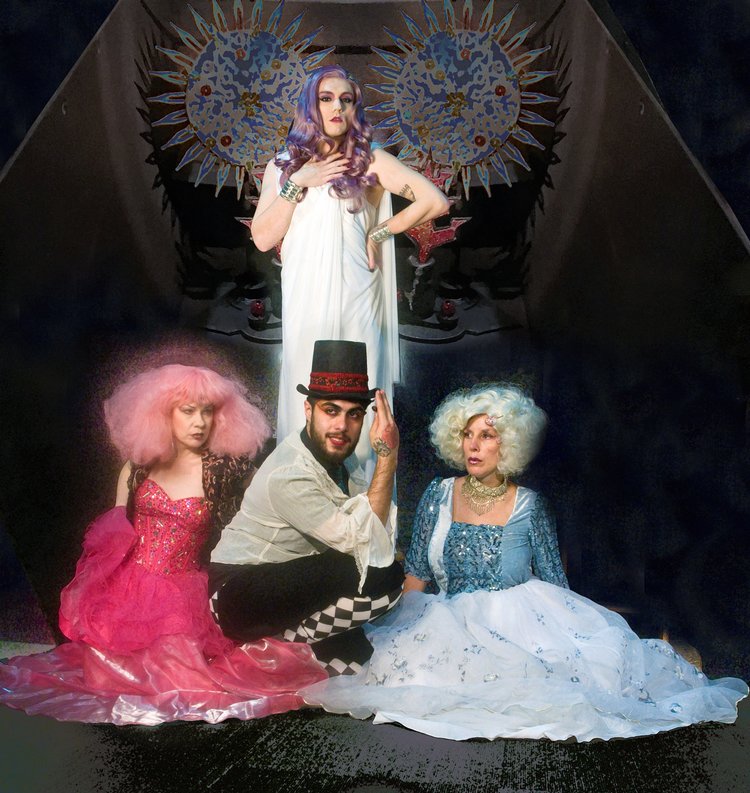 Representing Bipolar Beauty: A Conversation with Violet and Kelly Anchors of Bi-Polar Bitch

On April 25, 2019, Scapi Magazine sat down with Violet (I noticed Scapi spelling was Vio Let, but Rhinofest post for the show was Violet, I’m going to use Violet in this draft) and Kelly Anchors of Bi-Polar Bitch, a show, an experience, a happening, a play, that features a cast of people with Bipolar disorder.

Bi-Polar Bitch depicts what it’s like to have a manic episode. To develop the show, Anchors asked herself how the cast could take audiences with them on the trip that is mania. She described mania as being “pretty awesome, until you get all the way up to the sky and then have to go to the hospital. But a lot of cool things happen.”

The show turned out far from Anchor’s expectations. She initially envisioned a word-based performance–that is, until she saw Violet sing at a bar. Halfway through her set, Violet mentioned to the audience that she was Bipolar. Incidentally, Violet had written much of the Bi-Polar Bitch music before joining the project.

“It just kind of panned out, because I’m Bipolar as hell, that the lyrics were just kind of innately Bipolar enough to work for the play,” said Violet.

Both Anchors and Violet have Bipolar disorder. Anchors, who is in her 50s, told Scapi that she still struggles to be open about it.

One intention behind casting all Bipolar artists was to address its stigma. Bi-Polar Bitch is a space for people with Bipolar to be unashamed and understood.

“When I was diagnosed Bipolar, I was like, no, you guys have no idea what’s going on with me, I’m much more complicated than that,” said Violet. “It was because, honestly, it was so stigmatized. I’m scared of being that. People are scared of people who are Bipolar, and I don’t want people to be scared of me. That’s horrible.”

Anchors began creating Bi-Polar Bitch a few years back. It started with her vision of a campy, beauty pageant situation, with interludes of serious monologues. She began the project with two other Bipolar artists, pitched it to Rhinofest, and got a show slot.

“Then, I hate to say this, but I think a little bit because we’re Bipolar, it would fall apart. We wouldn’t get our shit together,” said Anchors. “This year, in my proposal I wrote, ‘No matter who quits, no matter what happens, I’m doing the show.’”

Soon after declaring this, Anchors saw Violet perform, and there she decided to step aside and let Violet lead. At the time they met, Violet had been only recently diagnosed with Bipolar.

“I was just kind of sharing it to have an exploratory reaction from people, and see where they were,” said Violet. “Outside, Kelly was just like, Hey, we’re gonna do a play in February, it’s called Bi-Polar Bitch. Wanna?”

Violet joked that, based on the merit of the title alone, she said yes. Anchors said she was so excited, she started shaking.

“I knew the minute Violet said yes, this show was going to be amazing,” said Anchors. “I just start to back away, because I can be off-putting, I know I can. I thought, well, as of now, she likes me, and I’m going to leave before I say something stupid and assholey, and she quits.”

“No, I really like you. And I’m very judgemental, so,” said Violet.

Scapi agrees with Violet that the name Bi-Polar Bitch is amazing, however, Anchors recently changed the name, which was apparently too edgy to gain proper coverage. Scapi, Anchors said, was the first organization to write back to her. She speculated that this is due to the word “bitch,” and possibly “Bipolar,” too.

“We took the words out of ‘bitch’ and put asterisks and stuff. We put spaces. We did every single way you could try to push it through, and we cannot promote it,” said Anchors. “Today, I said, I’m changing the name, and, being the Bipolar person that I am, I’m like, it’s gonna be called ‘Mental Ill Madness Hour with Carl Jung, and blah blah blah, and I had these 18 lines of a name. Violet’s like, Hey, can you talk?”

Violet suggested the new title, Bi-Polar Beauty, which both women, through frustrated they had to change the name, are excited about.

Another reason Anchors created Bi-Polar Bitch was because she was tired of people using the term Bipolar as a casual adjective. She said that, even after people listen to her podcast Bi-Polar Vortex, which details her intimate experiences with Bipolar disorder, they still say things like, “But, you seem totally fine.”

“Everybody’s like, Aren’t we all a little Bipolar?” said Violet. “No. The way I like to put it to their face is basically like, Yeah, a lot of people have up’s and they have down’s, but it’s really not Bipolar until it starts to ruin your life.”

Obviously, people without Bipolar disorder can’t fully understand the experience of those living with it. When asked what it’s like to work with an all Bipolar cast, Anchors explained that one of her life goals was to do theater with an exclusively mentally ill team. She talked about having once acted the lead in Sarah Kane’s 448 Psychosis, whose artistic goal was also to work exclusively with mentally ill people.

“It was always in my mind to do it. And it’s being done. That said, it’s really hard,” said Anchors. “Harder than I ever would have thought. While it’s been beautiful and amazing, and I think the work is very, very good, and I think the artists are so good, and they’ve added so much, I’m not sure it’d be a goal I’d want to do [again] any time soon. It was hard.”

“It was a very interesting, bumpy, surreal process for sure. But, on the positive side of things, there’s a kind of comradery that comes from, like, everybody’s Bipolar,” said Violet. “There were so many behaviors that I witnessed in this group that were normalized for me. You have no idea. I was like, Oh good, other people do that. Awesome. I could just be like, Listen I’m really manic right now.”

The Bi-Polar Bitch space allowed the group a place to connect with each other in ways they might not be able to in other environments. The group knew how to recognize and relate to each other’s behaviors, and even gently check on one another.

“I did love walking into the theater and being like, Fuck, I can’t move this week, I’m so fucking depressed,” said Anchors. She and Violet also talked about the team occasionally reminding one another to take their meds. “I never got offended with that group. If anyone else besides other people with this said that to me, I’d be offended, but when they said it, I’d be like, Oh shit, I didn’t.”

Anchors mentioned that theater has saved her life, though, there are times she’s had to take a break from it, because it tends to trigger manic episodes.

“The times I’ve ended up in the hospital and have had my breakdowns are from theater,” said Anchors.

She referred to this fact as a cruel reality, or even a broad life irony–the thing that saves her is also the thing that triggers some of the more difficult aspects of being Bipolar. But, Bi-Polar Bitch has made her feel healthy. Anchors described “health” as getting out of bed when she’d rather die and dragging herself to rehearsal, where, an hour later, she’d feel awake and stimulated by the creative process.

Violet, too, agreed that art, though it can’t replace therapy, has allowed her to express her deepest, most intense emotions. She said that, if it weren’t for these modes of expression, she’d explode.

“I could explore this new way of describing my consciousness with amore abstract lens, instead of just thinking of it everyday in the practical, mundane terms of my existence,” said Violet.