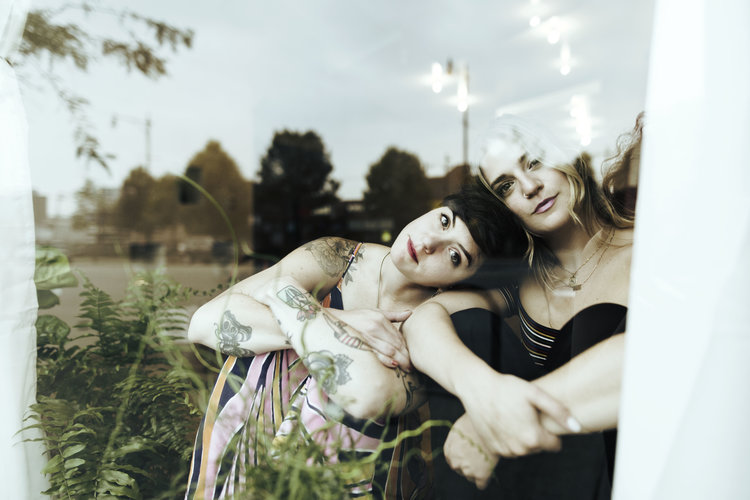 ‘Let it be vague’: A Profile on the Founders of The Martin

Before the figurative curtain rises at The Martin, coordinated chaos ensues inside the small storefront. Its founders have thinly veiled the flexible performance space with the venue’s brand markers: its signature bird, colors, and cadre of handmade cotton clouds scattered about.

Each individual event prompts a sometimes-complicated journey of interior manipulation in order to tailor the venue to the performance’s needs.

On the night I was there, friends of the venue, including The Martin’s executive assistant Bianca, moved benches around and enshrined the brick walls with leafy decor and art for a collaborative bring-what-you-may show titled BUDS. A lanky boy on a ladder attached prints to the ceiling alongside a half dozen other helpful creatives.

“Can you hand me that print?” he squealed to me and the two people lounging below him. He was close, time and time again, to falling into the crowded shelf of knick knacks below featuring a whiskey and tobacco candle, a mustachioed skull, and an old typewriter with deceptively modern-looking keys.

At the helm of the chaos stood Whitney LaMora and Lora Miller, the Martin’s creators and directors––the parents of a business that is thriving in the brim of infancy, only one year old. They march slowly yet confidently into their second year, striving to preserve the artist-focused founding principles of their nonconformist West Town space.

“Let it be vague,” said Miller loudly after clearly being asked “What is it?” by bystanders one too many times. “My favorite thing is to let it be vague. To say that we are a flexible space and to expand it as just that.”

LaMora and Miller sat me down on a massive mustard yellow chair one of them called “the throne” to answer my questions. The soft thumping of Bianca’s pink heels and the murmur of patrons behind them can be heard in the echoes of my recording.

While everyone set up in the background, the duo said hello to artists coming in, flitted to talk to me, and ran between the open space and a room tucked behind a white door where they presumably hide stored items and extra seating. “CAROLINE,” they both bellowed in unison when the poet enters. She greeted them with a soft smile and a thumbs up in their direction.

Just like in their greetings, the founders are incredulously always in sync, moving around each other with synchronicity they began to establish when they met three years ago.

“I remember waiting to talk to you,” Miller said of the time she first encountered LaMora after one of her shows. “Because they were so many people. I just wanted to give you my card because I was so inspired.”

LaMora spun her head around and responded “that’s so cute,” prompting her dangly orange earrings to flutter. Deep in nostalgia, they nearly forgot I was there.

Following their brief post-show meeting, the partnership collaborated to open the venue LaMora had already conceptualized. While at the helm of her homebred production company, Wirehouse Productions, LaMora found she could host creative events more efficiently than the people she was renting from.

“I had a lot of that voice like ‘I could do this better,’” said LaMora. She began squirreling away money in summer 2017 and met an equally enthused Miller months later.

As a fellow producer, Miller found herself wading through the same struggles: unreliable venues, lack of communication, and an unforgiving transactional relationship between the spaces’ owners and the artists.

“I found myself in situations where my time was being wasted,” she said. “A lot of the production was the last thought.” But with a single follow-up email Miller sent to LaMora, their partnership took off. And their problems with venues balled into a distant memory.

In July 2018, The Martin “opened on Craigslist,” Lamora said. She laughed when she told me.

The pair harbors a strong artist-first mentality because they are artists themselves. Miller remembers her days as an acting major at California State Fullerton. She moved to Chicago after to pursue a career in its DIY scene and even opened a space in her old duplex that predated The Martin. There, among her living room furniture, laid a hotspot for house shows. LaMora’s response is less romantic.

“I did it because my older brother did it,” LaMora said. “I did everything he did.” Each has their own long-winded list of credits to follow, a detail they barely scathed in our conversations.

LaMora and Miller’s backgrounds explain their flexible rates and willingness to negotiate with burgeoning artists. First art, then money––never the other way around.

“We make it clear it’s a conversation,” Miller said. “We get creative when we have to.”

They aren’t ones for immediately “slapping down contracts” with corporate officialities, though they protect themselves from being taken advantage of.

“From the beginning, we focused on building a community around the idea that it doesn’t matter if you’re a creative or if you’re a performer, you can consume and be an active participant in art,” Miller said.

Bianca cheered silently with her hands behind them. She made sure I saw her.

I see them interact gleefully with their patrons, artists and audiences alike. LaMora ran out to stock the bar with no hesitation after Bianca had forgotten a few drinks for the night’s show. Between a focused session of stringing lights on the wall, Miller chatted with Caroline about where she got her jumpsuit. Even their lavish bathroom is an ode to their audience. Its walls don thank you letters from artists, blown up baby pictures of themselves, posters defining different aspects of queerness, a colossal mirror, and two sinks. Both their space and their interactions are charming and deeply personal. It’s almost like watching two women throw a potluck. But the potluck is a performance, and their house is a business.

Rent in their first year came together from $5 memberships to The Martin’s good omen club, revenue from artists, shows, and bar sales, and hearty collection of donations on Venmo, a money-sharing app. “A percentage community funded,” LaMora explains. The business is bound together with bouts of goodwill, surges of ingenuity, and love for applause.

Part of this goodwill comes from their landlord, Bill, who they call “the friendly neighborhood dad without kids.” The duo is platonically enamored with Bill. Like any good father, he donates second hand fridges to the business and offers to make repairs at their plea. When The Martin’s location was open to be leased, Bill had the option to add to one of the polarized versions of the street: one housing the commercialized Pizza Hut and GameStop, the other nurturing a dive bar,  Indian restaurant, and liquor store. He chose the latter.

Opening the Martin was a risk, and the duo is no stranger to this truth. LaMora and Miller, as artists, are inherently risk takers. Miller remembers when she was younger and tried to bully herself into becoming a lawyer for practicality’s sake, but she took the leap of faith after winning a high school theatre competition on a whim. The partnership jumps again every time they pick up an artist with unfathomable passion and little money to support it.

Their biggest risk was placing The Martin where they did. The venue is sandwiched between two other performance spaces that existed before them and had the potential to flay their business.

“We knew that,” shrugged LaMora with a founded sense of security now that they had lasted a year. “And we didn’t want to take away from them,” added Miller. “We wanted to add to that community that wants and needs this space.”

They are relentlessly busy at the 13-month mark. Miller and LaMora manage The Martin as a team, and Miller even dropped her 9 to 5 job to accommodate the ever-growing demand to use the space.

The venue hosts three to five events per week, sometimes two in a day. While the pair hurries around the space parading cardboard boxes and emptying the donation jar that rests on a glittery tablecloth, I can see them planning for the next day, the next month, and the next year.

“Chicago is a big city and we have only reached a small percentage,” LaMora said. “Half of the first year was just a lot of ‘how do we do this?’ There’s so much more we can hand to people now that we were just building before. I know we’ll grow.”

LaMora and Miller smile at each other and then me when I’m done asking questions. They reset the chairs they were sitting on, both remarkably smaller than the “throne” they had given me. They swivel around into the space they have founded and warp themselves out of their moment of rest, of indulgence, before the night’s performance.

“You’re welcome to stay and watch,” Miller said. I nod.