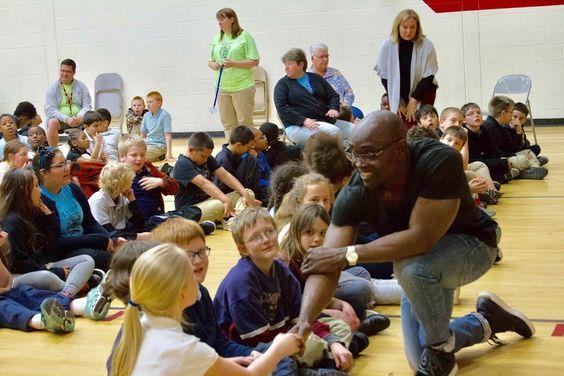 “Nobody told me.” Sunny Akhigbe, President of A Boy and His Dream said recalling his childhood.  Nobody told him he could get out of his situation. Nobody said they were proud of him. Nobody told him he was traumatized and that what he was going through wasn’t normal.

Adversity followed Akhigbe from the moment he was born. Born out of wedlock, he was rejected by society from birth, and was separated from both parents at a young age.

“In this society, it’s normal. Where I’m from, it’s taboo.” Akhigbe said.

For Akhigbe, going to the gym was always an outlet for him. When he was overcome with anger or overwhelming feelings, he had to run or lift weights or else the feelings would be too much.

Akhigbe learned how to read by 19, and moved to the United States when he was 30 due to the kindness of a benefactor who paid his way so he could work and study. He was training to be a corrections officer at a youth detention facility, and it wasn’t until he learned about the psychological effects of childhood trauma that he had language to describe what happened to him, and get more tools to dissect it and manage it.

He also realized that he could relate to these youth in a way that other officers couldn’t. He’d lived their life, felt their pain. He could give the hug of a father figure he never had. No situation can seem as hopeless as a poor teenager in juvi, but Sunny made it his mission to fill them with hope anyway.

“If that child has hope, that child will make it over time.” Akhigbe said..

This experience started Akhigbe on the trajectory he is on today as the president of A Boy and His Dream, a Chicago-based non-profit with the mission to help youth take control of their lives and overcome adversity.

“Adversity is supposed to prepare them for the next stage of life. If something happened to you, learn from it. Move onto the next stage.” Akhigbe said.

Being a minority and an immigrant, Sunny often has to work harder to prove himself and pitch his business than those in the majority culture. He has encountered people with an unconscious belief that Nigerians tend to be shady, or take advantage of others (a stereotype not helped by those pernicious “Nigerian Prince” email scams that plague our inboxes which “raised” over $700,000 last year.) He wants to help others use their voice and seize opportunity by teaching youth how to stand up for themselves but in a way that will earn them respect from others. These youth need to know bluntly what they’re up against, while given the tools to get them through to the other side.

“People need to stop getting rich off of lying to our children,”Akhigbe says as a critique of the advice most youth receive. What makes Sunny’s method different is his two-pronged approach: radical truth coupled with radical hope. Sunny believes that “Everything will be okay.” is the worst thing to tell someone, it’s sugar coating their problems. At the same time, many youth have been convinced that their problems and adversity will never go away, imprisoning them in a perpetual victimhood mentality with no expectation to overcome. “My people are confused.” says Sunny.

“I speak a different language.” Akhigbe said. “I tell a young boy to speak up, stand straight, and pull up your pants or nobody will take you seriously. Some people don’t like that.”

Sunny has a real connection to the children he interacts with through his foundation. He pulled out his phone and showed an email of an 18-year-old girl who is one of his scholarship recipients. The email had a worried tone to it, explaining that if a specific check did not come by a certain date, she won’t be able to go to school. If she has no money or funding, she will not go to school.

“I was losing sleep last night, because I was thinking ‘What happens if I can’t cut the next check?’”

Sunny hopes to expand A Boy and His Dream in the coming years support more youth in their journey of overcoming hardships and making positive changes in their lives.

To learn more about Sunny and his foundation, visit www.aboyandhisdream.org.