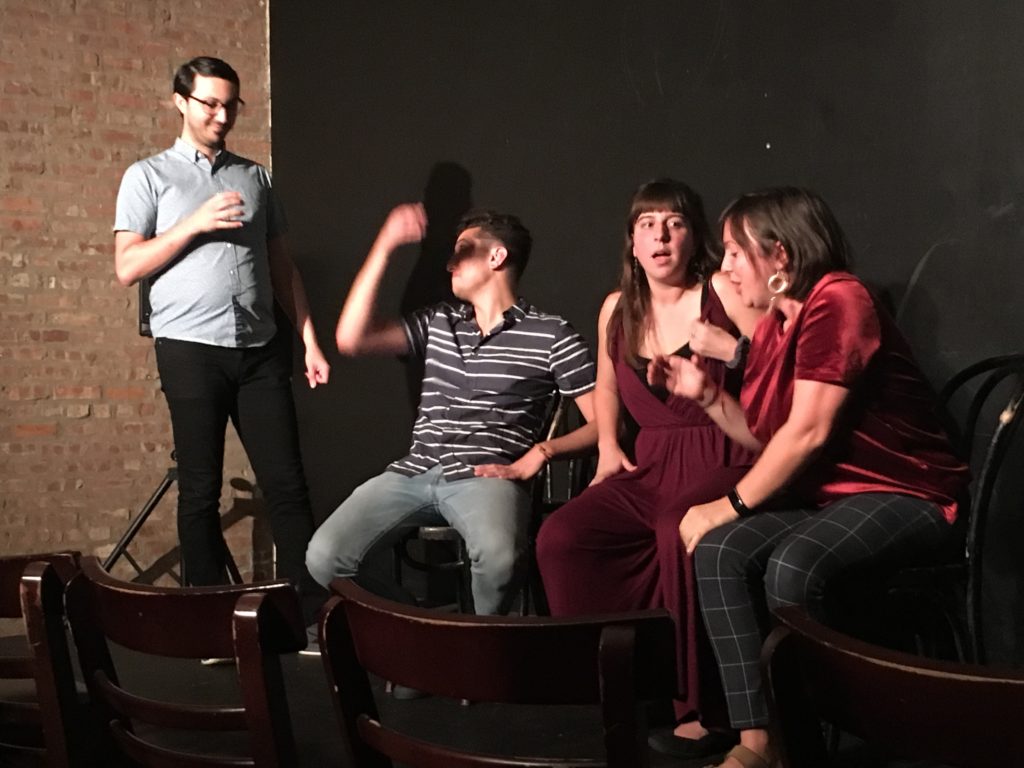 The Rise of Logan Square Improv: How One Indie Improv Theater Became the Most Fun Place to Play in the City

A few Friday nights ago, I was in my apartment, trying to convince myself it would be okay to blow off writing this article. I had endured a series of long weeks, and all I wanted to do was stay in, binge-eat kettle-cooked chips, and watch some old lady TV.

Finally, I lugged myself out the door and to the theater. Immediately upon entering the lobby, I ran into my close friend. Then, I found two more friends in the crowd. Someone offered me a beer from their backpack. We chatted with a stranger sitting next to us. I laughed for ninety minutes straight at four superb teams.

By the time the show ended, I had long forgotten my sorry state from a few hours prior. And that is the beautiful and inimitable magic of Logan Square Improv, the most fun place to perform and see improv in the city.

Founded in November 2018, Logan Square Improv (LSI) has had what could be described as a meteoric rise. Only five months after opening its doors, the theater outgrew its space and shifted operations to a larger theater near Diversey and California.

The theater enjoys consistently packed houses, warm crowds, excellent improv, and all-around good vibes. Compared to many indie theaters, where shows often have audiences of zero and such sorry digs that laughter is uncomfortable, this feels like something of a miracle.

I found myself wondering about the secret to LSI’s success.

When I met the founders and owners, Alex Prichodko and Andrew Lemna, I understood immediately why this theater was doing so well: these guys are just great. What they lack in business acumen and theater management expertise, they make up for in professionalism, seriousness, and good old-fashioned kindness. Performing in independently-produced shows since their college days at Purdue, they’re no strangers to show production and learned the value of rigorous preparation early on. Prior to opening their own theater, the two ran a successful show in the back of Finley Dunne’s Tavern in Lakeview.

“You need discipline,” Prichodko said. “Producers need to take it seriously, so that by the time the show starts, everyone can just play.”

Prichodko and Lemna are scrupulous. At every show, they arrange the room afresh, check in with teams, and devise a running order. I saw first-hand how committed they are: as we spoke outside the theater before a show, they took turns slipping inside to ensure everything was running smoothly.

“We want to start on time,” Lemna said to me apologetically as Prichodko ducked into the venue.

“Producers should care about the show. Doing the small things shows you care,” Prichodko said later.

And they’re right. Viewers and performers alike notice and appreciate the attention to detail. After a show, I talked to Sheila Master, who’s been to numerous LSI productions.

“It’s so well put together,” Master said. “It feels like friends are putting it on, but it doesn’t feel like it’s thrown together.”

Inside, improviser Miranda Rozas, who’d just stepped off the stage, explained how Prichodko and Lemna’s meticulousness impacts her experience as a performer. “It feels effortless,” she said. “They know this is something worth investing in.”

Beyond Prichodko and Lemna’s care and professionalism, there’s something less tangible, but more impactful, that contributes to the LSI magic.

“We try to make sure the audience feels really welcome,” Prichodko said. “If we see a face that we don’t recognize, we introduce ourselves to them.”

I hadn’t noticed at first, but, sure enough, whenever I returned, I saw either Prichodko or Lemna posted up at the entrance with a smile ready for whomever might walk in. This welcoming atmosphere is hard to replicate at a larger theater like iO or The Second City, and has made LSI popular even among improv layfolk.

“We get quite a few walk-ins,” Prichodko said. “Nearly everyone is from the Logan Square neighborhood, which is really cool. People here are open-minded. If they have a good time, they come back.”

Lemna recalled a local couple that frequented their old space, even showing up in LSI-branded gear.

“The man told me that if he had to choose between coming to see a show and staying home and watching Netflix, he’d come see a show. That was a pretty huge compliment,” Lemna said.

By cultivating a warm, receptive audience, Prichodko and Lemna are doing their performers a favor, too.

As with most performance arts, playing for audiences that are new to your form and eager to experience it, is as desirable as it is rare. Players love performing at LSI for that reason.

But for Kennedy Baldwin, founder of the Spanish-English show “Carlos Angeles: Viernes en Logan,” the opportunity to capture an audience at LSI is about more than playing in front of fresh eyes.

“I grew up in Logan Square, about two blocks away from the theater,” Baldwin told me. Her family is part of a large Puerto Rican population living in the neighborhood. Unsurprisingly, the predominantly white, English-speaking improv community in Chicago has not thus far had much to offer this Logan Square population. But Baldwin is changing that. Her team performs a bilingual showcase, which features an opening Latinx team followed by an improvised version of the wildly popular, totally ludicrous Charlie’s Angels franchise.

“It feels like I’m able to give back to the community. People from the neighborhood have come to see the show,” said Baldwin.

“Viernes en Logan” has been so successful in Logan Square that Baldwin hopes to get a run at a larger theater, so she can reach an even wider Latinx audience. For now, she and her teammates are content at LSI, performing for committed and diverse audiences (which, on the night I attended, included Lemna, who sat right in the middle of the audience).

After visiting LSI, I was totally convinced that you could run a theater on good vibes alone. Yet, while watching shows, I was struck by something else: all the teams were comprised of seasoned performers with big-stage experience under their belts. In one night, I saw a team from The Second City’s “Severn Darden” program, a 3+-year-old indie team that has performed at the Del Close Marathon in New York, and a team of iO Harold Team players.

When I asked Prichodko and Lemna if they specifically invited highly experienced improvisers to perform, the answer was no. Prichodko told me that when they started out “all the shows we were producing were just with our peers, people we knew and liked to watch perform.”

But because Prichodko and Lemna are seasoned improvisers who perform at large theaters, their peer group includes people with like experience. The law of attraction prevails: good improvisers attract good improvisers. The result is that from day one, LSI has been able to draw from a very strong pool of talent.

Still, a lack of improv experience has never prevented anyone from getting on stage at LSI.

“We like to get new performers in the theater,” said Prichodko. “Since we’ve opened, there’ve been a ton of people who’ve come through the theater. It’s really awesome to see and meet everybody.”

As a performer, Rozas views this as yet another unique LSI perk. “It’s beautiful because a lot of the players are experienced, but it doesn’t feel exclusionary,” she said.

Far from reducing shows to sloppy messes, this inclusivity breeds a special sort of fun and silliness on stage. Free from the shackles of a specific form and the need to impress theater administrators, performers can play exactly how they want to play.

“A lot of house teams from other theaters come here so they can get a night off from being watched,” Lemna said. “You can show up and do your thing and not feel a lot of pressure if you make a mistake.”

Improviser Meredith Weir characterized LSI shows as “loose and fun,” while Baldwin, with a self-deprecating laugh, put it this way: “No one who is watching here will be able to get you anything. You can do what you love.”

Despite their popularity, and despite the obvious signs that, if they wanted to, Prichodko and Lemna could turn their theater into a venue as fiercely competitive and passionately sought after as iO, they’re not interested. If anything, the lesson they’ve drawn from their success is that they should keep things exactly the way they are.

“We always wanted the theater to be for indie teams,” said Lemna. “There’s so many talented people out there who, just due to the volume and size, don’t get the opportunity to go up at bigger theaters.”

This means no elaborate improv education system, no auditions, and no house teams. For one thing, Prichodko and Lemna don’t want to evaluate performers. But, more importantly, favoring certain performers over others would go against their improv philosophy.

Before ducking into the theater to start the 8:30 p.m. show, Lemna mused on his long-term experience in the improv community and his more recent experience as a teacher. “Seeing how quickly people get it…Everyone is really good and can be really good. It’s for everybody,” he said.