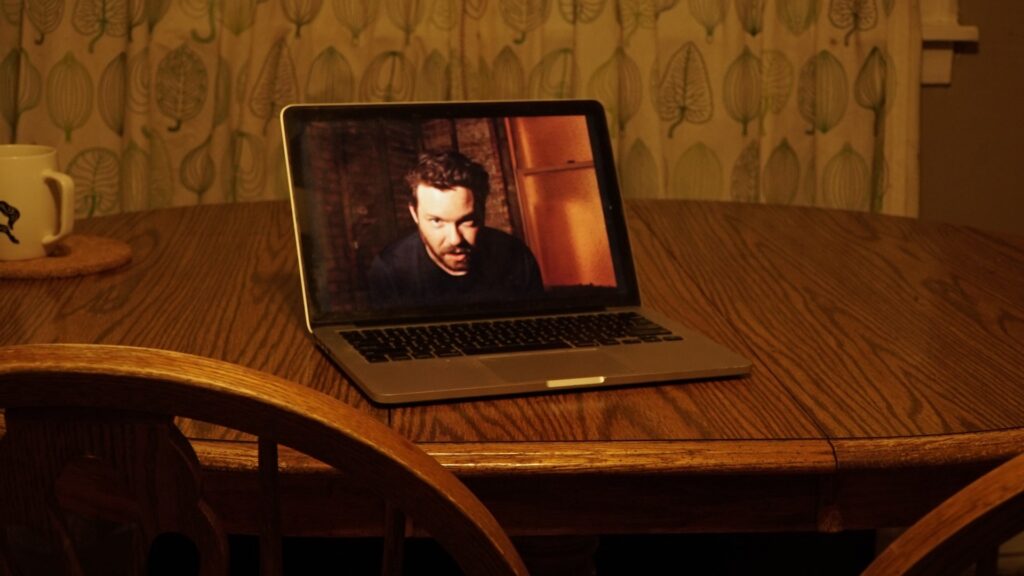 There is a freshly poured beer in a glass. It does not come from concessions – just my fridge in the kitchen. The room is dimmed – house lights down. One more adjustment – a blanket to protect my feet from the chilly fall air. Although I’m not in a theatre, I take my ceremonial deep breath before diving into the world of a virtual play. As I launch the video on my home television, the living room melts away and gives itself over to an unfinished basement. The top of a single chair is visible in the frame. A red-haired man darts in and out of sight, making final adjustments like he’s making sure the camera – the audience – is comfortable. The play begins.

Strawdog Theatre Company’s Run the Beast Down by Titas Halder is a digital performance piece that explores the desperation and spirling nature that comes with the collapse of one’s world. The rich storybook quality of the lines paired with an impeccable performance from leading actor Gage Wallace make for a modern tale of woe and despair that pulls the qualities of great mad people of yesteryear – Hamlet, Richard VIII, Lady Macbeth, take your pick – into the 21st century.

Charlie greets us with a barrage of distressing news. Not only has he been fired from his job, but his girlfriend, Alex, has decided to leave him.  As Charlie relays the events of this first catastrophic day, he brings up the Fox. The woodland critter appeared after an evening of no sleep, and over the course of the next few days, he’ll escalate in Charlie’s world from furry friend to stalker, then to home invader, and eventually to potential exterminator.

Set in London during a financial crash and civil unrest, this “dark fairytale” invites the viewers into the mind’s eye of a person who is losing everything, including their mind.

In this 75-minute production, director Elly Green has clearly used the digital element of the show to her advantage, but not lean on the technology solely. Wallace, the solo performer in the production, takes the narrative nature of his lines as an opportunity to tell the story of Charlie’s stream of consciousness.

There are many moments in which he takes an almost Shakespearean approach to his interaction with the camera; instead of speaking to the hundreds of eyes watching from their couches and beds, he speaks to one all-knowing Other, giving vivid, prose-esque descriptions of the high and low points of his life. He shapes the stories of his downward spiral by painting the scenarios with variations of his London accent, introducing the audience to a cast of roughly six other people involved in the story.

The whole play reads as a well-used moment of digital media that you’d experience in the theatre. As a team, Kamille Dawkins (Director of Photography), Kyle Hamman (Editor), and Daniel Etti-Williams (Sound Designer) make clear and concise choices when choosing when to use moments of digital enhancement, namely distortion filters, the narrowing/widening of the screen’s limits, and the various blood-chilling sounds that a fox makes.

In one particularly wrought scene, Charlie describes a gruesome and violent asphyxiation. As he describes the action, the sides of the screen reflect the action of the actor’s hands as they squeeze against the neck of their assailant. A white noise-like pressure can be heard gently in the background as the moment escalates, while the edges of the screen draw closer and closer together. These subtle touches are almost barely noticeable until the viewer realizes that they, too, feel constricted – a direct result of this well-placed technological moment.

Perhaps the most exciting aspect of this production is the hope that it can instill in those who are still missing and mourning their theatre spaces; the performance felt like a piece of theatre. Not a movie, not a short film, a real piece of theatre.

The intensity with which Wallace plays to the audience reads as genuine interaction; at many points, the living room became lost as the story moved from room to room in Charlie’s home, as the tiniest details come under the microscope. Wallace never allows the camera to come between himself and the audience; he leaps into your home and tells you a magnificent and terrifying story that allows you the same relief from the outside world that a theatrical performance gives.

The element of hope that accompanies this experience is reassuring. If the season is going to look so different that the preferred live medium cannot be used, then may it all be done with the same care, concentration, and intention as this fantastic performance.

Spaces may be lost, and as a community, we should mourn their passing or fight for their continuance. The art form, however, will be back, and until the moment the doors can open again, it should bring great solace that work such as this will be made by the same brilliant and creative minds that have been finding solutions to big problems for hundreds of years.

Editor’s Note: The virtual run of Run the Beast Down has been extended! It is now available for streaming through NOVEMBER 1ST.

Run the Beast Down by Titas Halder and directed by Elly Green is running now through October 25th. Tickets are structured as Pay-What-You-Can, but a $5 donation is strongly encouraged. They can be purchased here. As part of their efforts to support neighboring organizations in the greater Chicago community, Strawdog Theatre will share 50% of the proceeds from this production with Lakeview Pantry.