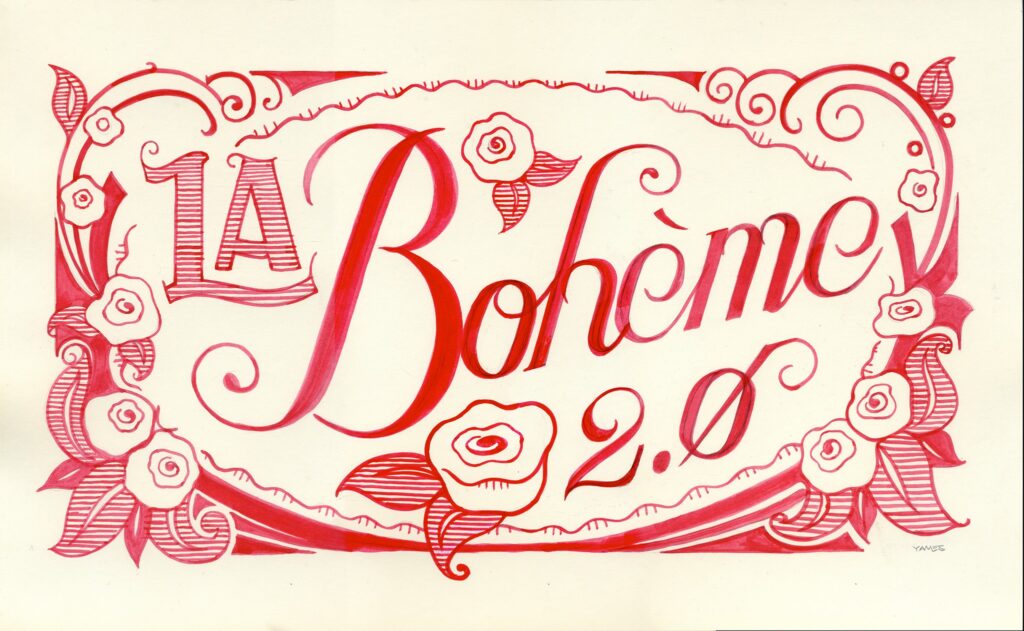 Kor Production’s La Boheme 2.0 trades in tradition for innovation in a COVID19-performance world

“In a world stricken with grief and loneliness, divided by our need to stay healthy, we asked ourselves how we could come together as artists and human beings. We present La Boheme 2.0, from our living room to yours,” the caption of a YouTube Livestream reads.

On March 14, 2020, the United States was forced into a mass shutdown due to the outbreak of COVID19. Hundreds of events across the country were canceled or rescheduled, including the performance of La Boheme scheduled to take place in a northside bar.

With the odds of returning to any kind of live performance appearing slim, Kor Productions did the only thing that an opera company can do in these unprecedented times; adapt. Specifically, by transitioning a centuries-old artistic medium into a fully-fleshed out digital event. Artistic Director Johanna Moffit was determined to find a safe, yet innovative way to keep the opera going.

In an interview with Scapi Magazine in May, the production team of La Boheme 2.0 sat down via Discord and gave us the scoop on how, exactly, they decided to adapt to their surroundings. The impetus of their decision? Heartbreak.

“When I thought about the possibility of not singing with another person for months at a time, it made me so sad,” Moffit said in her interview. “And then I read an article about a group of musicians who were passing recordings back and forth to make ‘live performances’… In the article, the author said that there would be no live performance of opera in April, and I was like, ‘Well I can’t let that be true!’ And that’s why I did our show as quickly as possible.”

This isn’t the first time that Moffit has reinvented the way that the classic Puccini opera was presented. Six years ago, Moffit was working at the Alin Pub Mainstage on the Northside of the city. She noticed that the oval-shape of the space would make a great play-space for an operatic performance – particularly a show like La Boheme, whose intimate moments and buddy-buddy jokes lend themselves perfectly to a bar setting.

In this level of familiarity lies the mission of Kor Productions; the creative team wanted to start a grassroots movement that would support the furthering of opera. Creating an intimate event in a space where people naturally feel comfortable and confident in interacting with the cast and the crew leads to people feeling comfortable around opera, leading to more interest in the art form.

It created an intimate experience, where the audience felt like they were indirectly part of the show. It’s this kind of non-forceful interaction that Moffit believes will make opera audiences grow.

“We struggle as a genre because people feel disconnected from what’s going on,” she said. “The stage is 30 feet away, we don’t understand what the words mean, and you have to read supertitles… We wanted to create an environment where everyone from the highest-level patron of opera to someone who had never experienced it before (and never really thought about experiencing it before) could be comfortable. Both viewpoints are valid.”

So Moffit set out to revolutionize the classic opera once again, but much like the friends in the show, she needed a little help from the talents of others. Those two driving forces came in the form of technical Director Elijah Lee and Music Director James (Jim) Welch. In a normal setting, the intention of these roles is fairly well understood. Bringing them into the digital era, however, means that each roles receives its own upgrade (of sorts). Take the role of Technical Director, for example.

“Instead of being on stage, I’m at home in front of 3 monitors making sure there is no lag or latency. That’s the big issue that you face when you’re dealing with something like this,” Lee said. “Even if you’re doing a regular Zoom call, trying to talk about something like work, it may be impossible. Being able to get more than 1 a Zoom call and have them be able to sing and talk is a bit of a challenge. My main goal is to make sure everyone sounds good, make sure that the internet is good, and if there’s a problem, try to fix it on the fly. Most times, it sends me into a panic.”

It’s at this point that technology and traditional music practice collide, and where Welch steps in. The process for rehearsal was very much so a digital arts-and-crafts project. James would create a track, and the performers would sing along to it using the same application. This helped to minimize the lag, and carried the team through their rehearsal process. Most of the time, the group was battling this technological fault in their attempt to create a seamless production. The best way to describe it?

“Scary – you listen to it in your headphones, and there’s lag there,” Lee said, “but on the live stream, it sounds great. On the Zoom call, it may not sound correct, but Elijah orchestrates the confidence of the actors. You listen to it separate from the YouTube stream and it’s a 3-ring circus. {All you can do is} trust your gut. Block out the other sounds and go with your own track.”

“I’m not much of gamer, but think like this; anything that happens in a {video} game is the result of something that is pre-programmed into the software…” Welch said. “There’s no coding to what live performances are doing – you turn everything on and whatever happens, happens. Maybe someday a Grand Theft Auto: Boheme Edition may come to be, but in the meantime, it’s live entertainment at a whole different level.”

This may be the “new norm” for performances for a while. Kor Productions is already aligned to perform their next piece, a live-stream of the Mozart opera Don Giovanni. Some see the online format of their art as a detriment to their work; Moffit sees it as an enhancement.

“If we accept the world of online as part of our entertainment experience, I think we can create productions that intentionally live in an online world,” she said.

This kind of adaptation has served the company well. After a typical recorded music rehearsal, the team would often watch the rehearsal back and watch how the acting could be interpreted on camera. The process was reminiscent of a movie set; they would watch back the take and interpret the meaning of what certain actions meant on screen. The ways that people looked at the camera, each other, what appeared and disappeared in the frame, etc. all went under the microscope as the artistic team tried to create this new form of presenting opera.

For an art form entrenched in centuries of tradition, the end product still maintained a high level of quality, from the performers to the technology. Elijah believes that though the task first sounded daunting, he’s not surprised that they were successful.

“Roger Egert said, ‘true art is defined by its ability to endure,’” he added. “That’s what I love about opera, about art; you’re taking something abstract, like emotion, and you’re making it into something tangible. That’s why I think it fosters the same amount of intimacy online; people recognize the emotions and facial expression {in an online capacity. It’s the combination of the age we live in}, people have long distance relationships, or use Facetime to communicate…it’s become the norm to get really emotional reactions over a screen. That’s why there’s still a high level of intimacy.”

Didn’t have the opportunity to see the show this past spring? The show (and the Watch Party Reactions) are still available on Moffit’s YouTube channel. Want to see this innovative new format in action? Kor Productions will be launching their digital production of Don Giovanni, details of which can be found and tracked on the Facebook Event Page. Join the cast for an hour each evening as they navigate this classic fuckboi in the world of webcams starting November 10th, 2020 at 7:00PM CT.

If you are interested in supporting Kor Productions, please consider donating to the company or the individual performers, whose information can be found in the caption box of each YouTube Video.