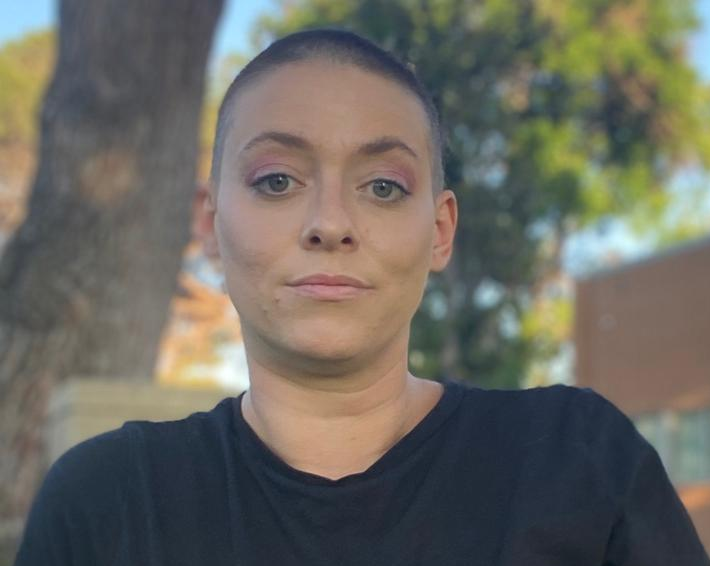 Therapy for Men and the Tiktok Joke to Podcast Pipeline

Sammy Mowrey did their joke about disguising therapy for men as a podcast on stage for about a year and a half, where it didn’t get too much traction. Then, they put it on TikTok, and it went viral.

The TikTok, a play on a Shark Tank pitch, hones in on male avoidance of accountability and mental health Mowrey pitches, “I know what you might be thinking, men don’t want to go to therapy! Men too mad! Well let me tell you what we do: we trick them into thinking they’re a guest on a podcast. Dudes love podcasts!”

“People [kept] commenting like hey, when are you going to do this? When are you going to make this real? And I kind of dismissed it, but after like a month of that happening I was like okay, fine, it would be kind of fun to be able to talk to my male friends and comedians are facts about stuff they’re dealing with, I would like that, under the guise of like getting to broke down with them as well about something that they like.”

Mowrey, a stand up comic themselves, mentioned that they will reach into the stand-up community for their first guests. “That’s most of my network,” although they have started reaching out to a few people outside the stand up community.

The first episode of Therapy for Men has Mowrey interviewing Tyler Snodgrass, a stand up in New York City. The Bro-Down segment has Snodgrass waxing about The Fast and the Furious franchise, explaining the joy in the absurdity of the series. Mowrey, an enthusiastic and genuine host, guided Snodgrass into Balls Deep segment, where he discussed his anxieties about being stagnant in his career during quarantine, feeling out of place as a relatively recent New York transplant, and eventually, concluding his stress about his parents contracting COVID despite his pleas that they abstain from going to in-person church services.

The podcast both pays homage and satirizes shock jocks by featuring absurd and garish sound effects in between the segments.

“The idea [with the podcast] that you bro down with the dude to disarm them, then you get into the real issue. So I think that it is going to be funny but the goal is definitely to have a vulnerable conversation with the men about whatever issue they’re bringing to the table.”

Mowrey achieved that startlingly well, by leading Snodgrass to accept the stress in his life as valid and connecting over their shared stress of being relatively new to their respective cities and adapting to being a comic in quarantine. The end result is a charming and touching conversation between two comics sprinkled with jokes and tangents.

Mowrey’s goal is to “give them kind of advice or tools or empathy or whatever it seems like they need over the podcast. Of course there are tangents and things that go off and ramble on. But 80% of the time it’s going to be genuine and vulnerable.”

You can listen to the Therapy for Men here.