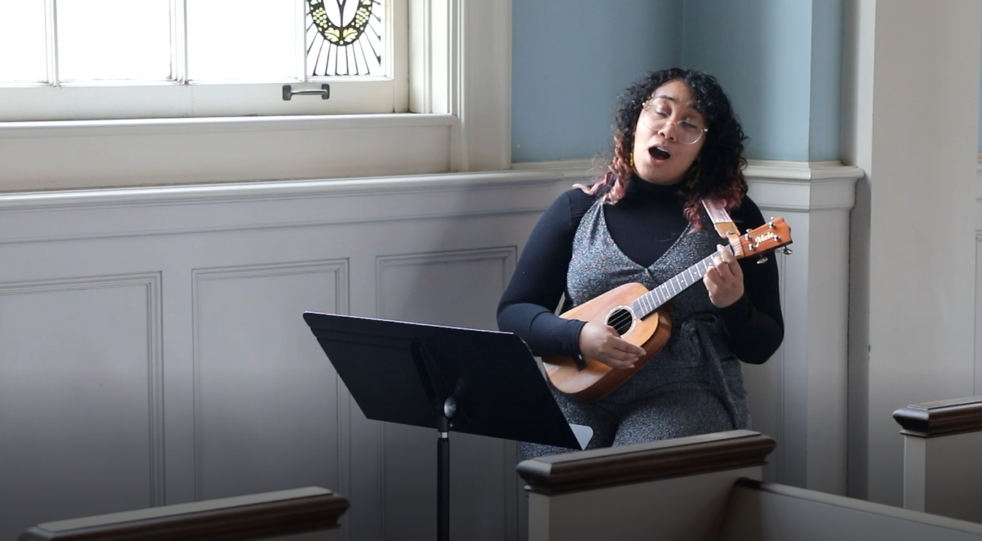 photo of Amanda Neal by Hearing in Color

On the evening of March 10, 2020, I reluctantly clicked the cancel button on a flight itinerary to the Philippines I had been saving for and looking forward to for over a year. The trip would have been the first time I had seen my family in the Philippines since moving to Austin, TX from Chicago, IL for graduate school, and canceling the trip meant I was going to miss my cousin’s wedding, too. A bummer. I would be able to visit that summer, perhaps.

I know now that wouldn’t be the case. Almost a year later, I remain stuck, though gratefully safe, in Austin. I have never been away from my parents and sister in Illinois for so long in my life, and as unexpected typhoons and deaths have struck the rest of my family abroad, the prolonged distance has been trying for us all indeed. Naturally, when I saw the Chicago-based Facebook event for Kababayan: A Celebration of Filipino Identity pop up on my feed, I was intrigued by the potential remedy to my homesickness for both Chicago and the Philippines. I invited my parents and sister, who were pleasantly surprised by the existence of a Filipino-American centered arts event. I toggled my response to “going” and booked my virtual flight.

Produced by Hearing in Color, a nonprofit committed to sharing songs and stories historically excluded from U.S. musical spaces, Kababayan—which roughly translates to “fellow Filipinos”—was a celebration of Filipino identity indeed. In collaboration with the newly launched Kababayan Collective, the event featured Filipino music, poetry, comedy, conversation, recipes, and art in a variety show format warmly familiar to and popular amongst Filipinos. In between performances were plugs for small Filipino businesses like Call Me Tita Megs, music theory and history lectures from Dr. Joseph Legaspi, and brief artist responses to prompts such as “What is your favorite thing about the culture of the Philippines?” and “When do you feel the most Filipino?” Held together by the warm live emceeing of Chris Aldana, the mix of acts was a refreshing antidote to zoom fatigue.

Providing structure for this wide array of offerings was a steady lineup of 18 musical performances ranging from pop to opera to folk songs. Highlights include Original Pinoy Music from folk fusion band SamaSama Project, Consuelo Velasquez’s “Bésame Mucho” sung passionately by Nicole Besa (and contextualized with acknowledgement of our Spanish colonization), and a stirring rendition of protest song “Bayan Ko” by the Kababayan Chorale. With each song, audience members were transported to different locations: a recording studio, the stage of the North Shore Baptist Church, the “Brady Bunch” zoom layout that has saturated COVID-era screens. While Hearing in Color is a Chicago-based group, the remote nature of the event allowed artists based in California, Wisconsin, Indiana, and beyond to share the same virtual space. The artists took COVID seriously in producing the event, and the evening even featured a PSA from Dr. Maria Valeña Fletcher urging audiences to continue social distancing and wearing masks.

Though streamed live, all performances were pre-recorded. Transitions between acts were seamless, and sound was beautifully mixed. The artists behind the scenes were left uncredited, unfortunately, though I suspect that like many Filipino cultural events, behind-the-scenes efforts were collective. While there was also no explicit costume designer, for instance, intentional pops of Filipino influence were present in the barong, terno, butterfly sleeves, and other Filipino clothing items individuals opted into wearing on camera. Another notable production element was the comments feed, which was popping with affirmation and appreciation during every act. Since performances were pre-recorded, artists were also active in the chat, excitedly fielding questions and compliments.

The virtual nature of the variety show naturally lent itself to a variety of viewing experiences that defied concert hall norms. In my case, I was watching the stream through my laptop with my family seated next to me via FaceTime. I don’t see shows with my parents often, and growing up, I regularly clashed with them in my efforts to prove theatre’s value. Yet, as we were watching Kababayan, my parents were standing up and dancing, belting along to songs, some of which I was hearing for the first time. My Gen Z sister and I were delighted when we recognized a song we had previously heard on TikTok, and while my parents were less excited by the more contemporary performances, our ability to react out loud together across the country in real-time was truly special.

When the prompt asking “When do you feel the most Filipino?” popped up in one of the interview segments, I honestly froze up for a bit, unsure of how I would have answered. Having been physically away from all Filipinos I know for over a year now, I realized I hadn’t actively thought about being Filipino in a while. Being the first person in my family to be born in the United States, I have always felt pulled between two cultures, as many children of immigrants do. I also felt that split visually and viscerally as I appreciated the event’s accessible song subtitles in both Tagalog and English, knowing I’m generally fluent in Tagalog, but being reminded through lyrics with heightened language that I felt significantly more comfortable following the English line. However, while I often experience guilt regarding this division, Kababayan didn’t foster guilt. It was a celebration of a range of Filipino identities, and I remain grateful for the opportunity to party virtually with my kababayan.