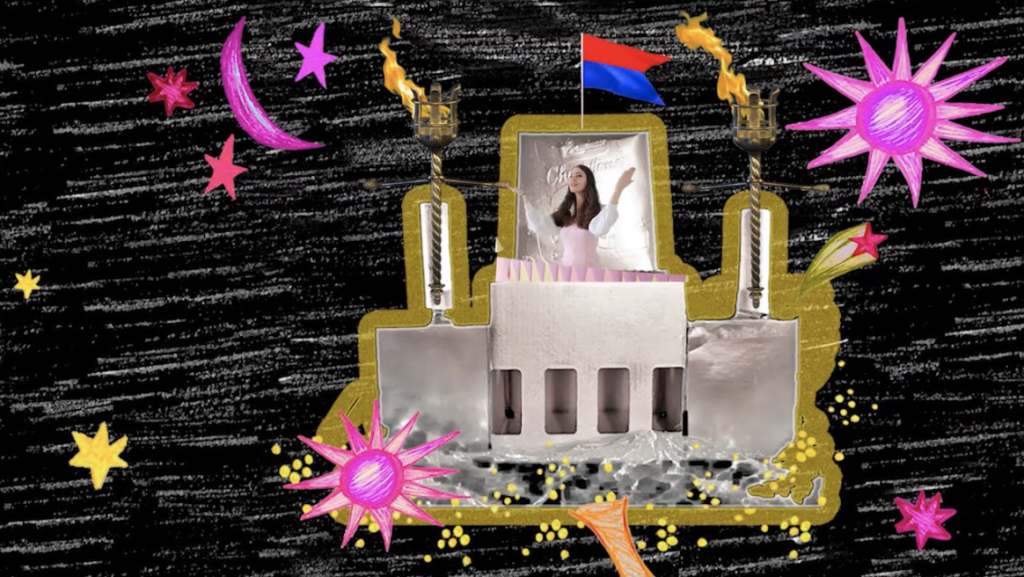 Thumbnail from the music video from Space Jousting

Boule Goes Boing released her album Superball in February, a dance pop album with fantastical, absurdist references. She collaborated with Harley Foos, a Chicago based filmmaker, to release a music video for “Space Jousting”, her favorite song from the album, which they’re premiering today.

Boule Goes Boing is the stage persona of Judy Jackson, an artist based in Brooklyn, who previously produced avant-garde classical music. “I was feeling constrained by that [genre] so I decided to try something new and ended up making a pop album. I really love synthesizers- you can do so much more with them, and I just wanted to make something that was really fun to bop around in your house to.”

The album starts with “Boule”, introducing the character of the naughty puppy as they go on various journeys and adventures. The classical influence in Jackson’s work can be heard in “Debussy En Pointe”, has some operatic elements, which lends itself to a rich contrast to the dance-pop genre. The juxtaposition of Jackson’s classical influence and affinity for electro-pop is best exemplified in “Haughty Lips x Ragged Gowns,” which alternates between a robotic lyrical performance and choral elements.

Although most of the album is whimsical and pokes fun at itself, there is a macabre element, with “Birds of Prey” focusing on the point of view of a predatory bird circling its prey. The album rounds out with Pirates of Love, an homage to pirates and a fitting end to the fantastical theme of the album.

Jackson wrote and mixed the album in November and December, working primarily in her bedroom. She wrote the album by first creating the beats and then fleshing out the lyrics. “Different fantastical worlds that were conjured by these beats that I made. Each track had its own little world in it that I picked out and brought to life.”

Jackson envisioned her stage persona, Boule Goes Boing, after thinking about what kinds of things she wanted to incorporate in her album, inspired by a song about a naughty do. “I wanted to have that type of persona— a cheerful form that’s kind of cheesy and a little bit mischievous.”

The music video for Space Jousting is colorful, kitschy, and absurdist, outlining a jousting set in space to win the heart of Boule Goes Boing. Harley Foos is a seasoned music video producer, and a frequent collaborator of Blacker Face, but it differed because it was produced remotely. Jackson filmed herself in Brooklyn and Foos used their roommates and borrowed their friend’s husky for the rest.

The characters are against a backdrop of animation, lending playfulness to the video. Foos drew it themself, added in via photoshop, and did some basic animation. The props and costumes were made by hand, with the swords being donated by non-profit EDGE of Orion.

Foos started by making a mood board for this video. Their goal was to make big characters to provide a large visual contrast.

“I love how collaborative the videos usually are. Before I even pitch any ideas, I definitely want to hear from the artists. What was the inspiration behind the song and what are they looking for in the music video Sometimes people have a really specific stage persona that they want to showcase. A lot of times people have specific ideas of what they want, because the video is an opportunity to show who they are.”

The “Space Jousting” video is a wonderful visual counterpart to the album, bringing to life the richness of the lyrics and adding in a visual landscape that flows with the synthesizer beats.

Besides music videos, Foos is also a documentarian and short film director “I like to explore race and class and capitalism through my filmmaking.”

They have a documentary they worked on with the Little Village Solidarity Network premiering on March 26th called Seeing You, about for-profit migrant children detention centers in Chicago.

You can listen to Superball here and watch Space Jousting here.
You can check out Harley Foos’s work here.