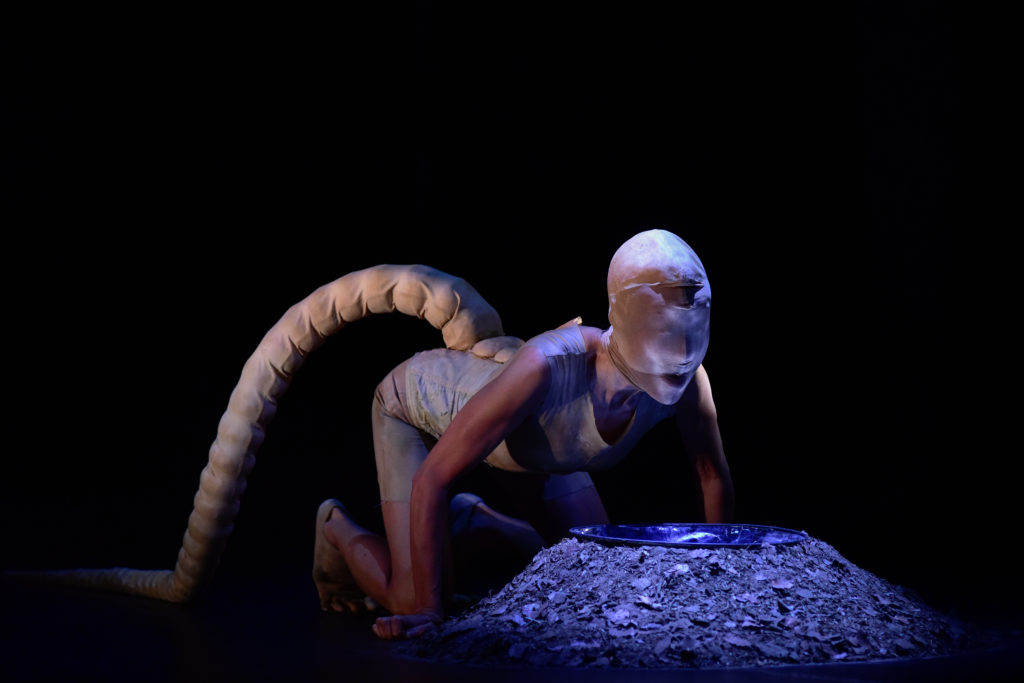 Ingenuity in Isolation: A Poem Expression of 100 Light Years of Solitude

Editor’s Note: This is an expression in response to 100 Light Years of Solitude in a poetic form by Danielle Levsky; it is followed by information about the work and process.

Alien sounds, or a failed transmission.
Clicking of the tongue.
The poop alters its shape.

Light shines on the poop, then disappears.
The unknown of the darkness.
Lights again, uncovering and

Reflecting the black, feces material.
The shape rolls down the path.
The shape shifts to the sound.

Drums play and affected the poop.
A small peep/sound from the
blackened shape/object,

A small segment of the egg opens up.
Are those hands?
No, that’s not a hand.

It’s a tube. A tail.
An esophagus muscle.
Five times.

Is that a snout?
Is the mound itself a creature,
Like the cousin of a penguin?

Or does the mound transform?

Then a hand appears.
A hand attached to… a foot.
A covering a foot.

Is it waving hello?
It moves itself up.
Where does this creature live?

The entirety of the leg, attached to the foot, emerges.
The shape and form lifts up and on.
One leg, one foot.

Plants firmly on the round.
The second foot comes out and lands on the ground.
Both feet are attached to special moldings.

Is the creature learning how to walk?
Sometimes it is in rhythm with the sound, the music.
Tap, tap. Plie.

Walk in the rain. Or.

A hand peeks out from the top.
Scratches the legs.
Foot scratches foot.

The hand points in different directions.
A light on the back of the wall: periwinkle blue.
A head appears and peeks out.

On tiptoes, the creature walks.
Creature grimaces (you can see the opening of a mouth
shadowed in the no-face).

Creature screams.
Creature folds into itself
and goes back into the shape, into the feces, into the shell.

Creature hides face and feet.
A light shines on the creature.
A rock once more. Or a cocoon, maybe. Not feces.

Creature scratches at the floor with their hand.
Creature whimpers,
Rips off the cocoon over itself.

There is a backside. A butt. The feet, the arms.

Creatures lies down on top of the cocoon, with its tail in full view, wrapped around them.

Creature crawls on all fours with forearms.
Head down, head up, one foot up.
Creature lifts and moves by forearms.

Fall over, stagger. Lift left arm and left leg. Lift the right leg, a little.
Creature flies, swims, collapses, gets up.
Creature moves their tale aside.

Launch up by right foot, then left.
The tail unhinges, full display.
A disattached spinal column.

Creature moves arms like wings.
Pull up, draw close to the ground.
Looks around. Grimaces.

Lifts up by arms
getting lighter and brighter in the room.
Able to use knees and juts out bottom of feet and arms.

Progression of a crawl.

It gets darker. Light follows them.
Fully crawling, creature reaches the dirt pile.
They are curious. They inch towards it.

Face down into the mud pile,
They look up, mouth in an O-shape, silent shrieking.
Music stops.

Creature is frightened, repulsed or confused at the reaction of water.
They rub the water on themselves,
Put water on their face.

Creature sneezes, sloughs. Slops up the water.
Opens mouth and goes down and in again.
Sloughing, spitting.

Music starts. Legs go out one by one.
Squatting and enjoying the music, the rhythm.
Touches hands to the floor.

Hops to the right of the mud pile.
Drums start to play.
Creature dances from left to right.

Observes reflection in shut off light on the side of the stage.
Taps light. It turns on.
Scratches butt.

Retreats back to the cocoon.
Cradles into cocoon, into tail.
Flaps arms.

Dance begins again
standing up.
Moving and rotating the arms.

Music reminiscent of a video game plays.
Creature moves arms above the head.
Creature grabs skull with both hands opposing.

Stands and grimaces.
Tail is between legs.
Discovers tail and puts it towards their mouth.

Lifts up, drops tail in water.
Huffs up.
Shakes tail into water then flings it around.

As if they do not know what to do with the tail.

Creatures opens mouth.
Creature slaps tail on themselves.
Creature holds tail up like they are going to put tail in mouth.

They hold tail in mouth as if it as a saxophone.
Creature whips legs around.
Left right left right.

Stands still, straight, hands at side.

Returns to cocoon in left upstage corner. Scrunches into it. Covers head.
Circles tail around the body.
Throws feet coverings away. Far.

Removes mask that was on face.
Calls out, shrieks in terror/delight.
Just shrieks. Removes rest of mask.

Rips off tail.
Circulates it around them. Exclaims and perches.
Looks emphatically at the blue light growing brighter behind them.

Hard periwinkle. Tosses tail on the ground.
Tousles tail back and forth. Creature tosses tail above them.
Between their legs.

Gets up.
Holds tail up in front.
Creature looks over the tail. Looks eager.

Creature chokes self with tail. Flails around.
Puts tail’s short end into their mouth.
Creature empathetically makes a sound and drags the tail by their mouth.

Creature collapses on the ground next to the cocoon.
Squirms. Tries to go back inside the cocoon.
Brings tail back in with them.

Creature drifts and floats through the blue space,
moves limbs fluidly, as if in water.
Music plays through a synthesizer.

Creature moves arms, dances up to mud pile.
Moves head and hair around.
Looks into the water within the mud pile.

Creature goes up and down.
Ooh.
Creature gives special shrills. Creature is happy.

Yoshioka was inspired by Gabriel Garcia Marquez’s One Hundred Years of Solitude; she sought to explore a state of solitude for a creature born on a planet 100 light years away from Earth. The creature realizes that its destiny is to exist in solitude, as it is the only one of its species on the planet.

The in-sync and aptly matching music composition by Tomas Tello and Zam Johnson accompanied the precise and artful light/technical direction by Spiros Paterakis. Pablo Alarcon’s costume design developed an interplanetary creature on stage, with the manifestation of this fantasy completed by Yoshioka’s careful, determined craft in developing every stage of the creature’s life in a marriage of patience and anticipation.

Yoshioka was a member of the first Japanese women’s Butoh dance company ARIADONE. She has performed Butoh across Asia, Europe, Oceania and North/South America. She also founded the art-formation group TEN  PEN  CHii   art  labor  with visual artist JoaXhim Manger and one of the music composers for 100 Light Years of Solitude Johnson and serves as the art director of eX…it!, a dance and Butoh exchange research project.

Yumiko’s interests lie in the interactivity of dance, space and visual art. She focuses on exploring the zones between body works and performing arts.

“While I’m dancing, I don’t feel my age,” Yoshioka said after the performance.

On stage, the creature did seem entirely ageless. When asked if she intended for an audience member to participate with the creature when they offered the water, Yoshioka said that this was not the intention of the act.

“It’s about loneliness and solitude,” Yoshioka said. “It’s about solitude and offering.”

I mentioned to her that I thought about approaching the creature’s offering for water. She smiled; this had not yet happened in any of her performances of this piece.

Yumiko Yoshioka’s one-night only Chicago piece was performed on Wednesday, April 25 as a part of the Bridge Dance Festival at Links Hall 3111 North Western Avenue, with support coming from Butoh Chicago and Sara Zalek.