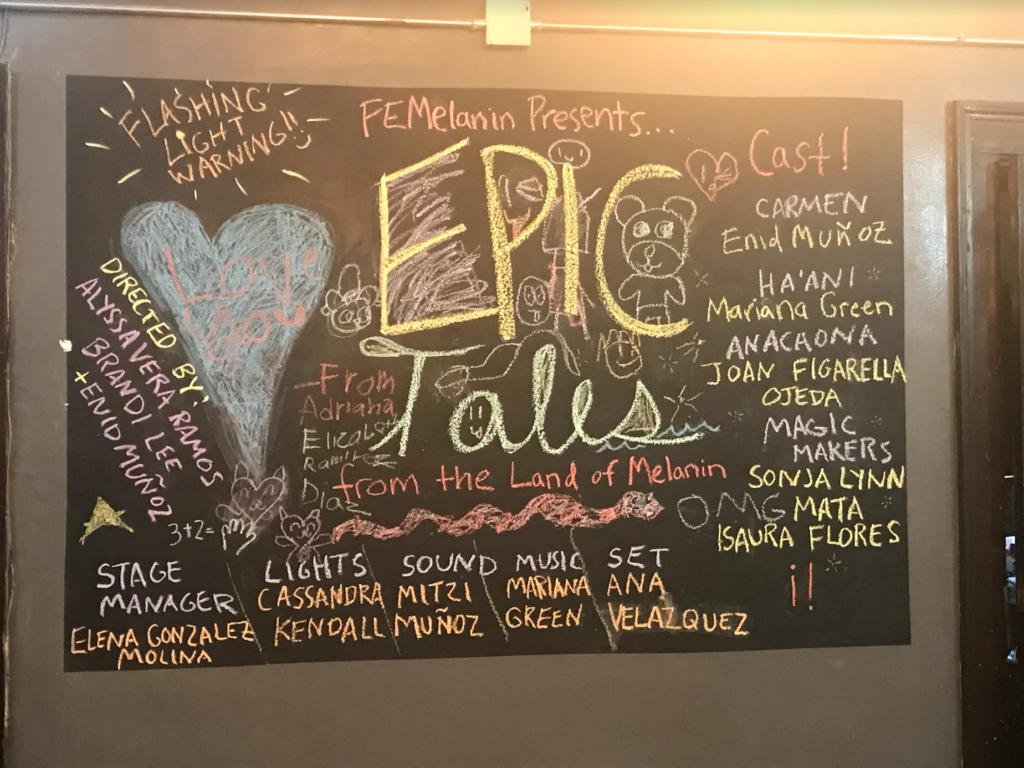 Strong. Wise. Unstoppable.: A Poetic Expression of EPIC Tales from the Land of Melanin

Pictured above: Cast and Crew for EPIC Tales from the Land of the Melanin/Photo: Olivia Sieck

Editor’s Note: This is an expression by Olivia Sieck in response to EPIC Tales from the Land of Melanin in a sonnet form; it is followed by information about the work and process.

On May 18, after a long, hard day at work, my mood completely changed walking into the house for EPIC Tales from the Land of Melanin. I felt a warm, relaxing and imaginative aura walking into the house at Free Street Theater at Pulaski Park. There were scarves and lights hanging from the ceiling and used boxes at the center stage for their set pieces. Also, the first two rows of the house were covered in sleeping bags to make the audience feel more relaxed.

The show is about 90 minutes long with no intermission, but as I watched the production, time flew by quickly. There was a pre-show where the performers got ready by asking the audience members to help get the set together, play with toys that would be used as shadow puppets in the show and try on costume pieces. Actors also went into the audience asking if they would like to be a part of the show by holding a sign with a vegetable on it. Luckily I got to be the cucumber in the show. The instructions were very simple and easy to follow, accommodating audience members for the show between the ages of 5 and 105.

And before the show started, Alyssa Vera Ramos, one of the directors of EPIC Tales from the Land of Melanin, talked about how it’s encouraged to play with the actors, but only if an audience member wants to. Ramos went on to explain how the entirety of the space is the stage and that the actors will go to the audience, too.

Although there weren’t any children in the audience when I watched the production, I felt like a kid again as the actors had me dive into the story of three, ferocious, little warriors.

The show is recommended for ages five and up. The production, which premiered in Chicago in 2016, is based on real-life women of color and non-Eurocentric fairytales that are blended with a fierce and imaginative story of three, young, female warriors taking on the world. The show showcases important topics about gentrification, colonialism and the power of one’s ancestry. Young audiences will join the heroes by helping them defeat evil creatures through different modes of participation. Audiences will also learn to build skills and about themselves during the adventure.  FEMelanin hopes that young people of color can relate and foresee women of color as strong-willed leaders.

EPIC Tales from the Land of Melanin final performances occur on May 25 at 6:00 PM and Saturday May 26 at 1:30 PM and 3:30 PM at Free Street Theater at Pulaski Park, 1419 West Blackhawk Street. More information can be found through femelanin.com. You can purchase tickets at epictales.brownpapertickets.com.