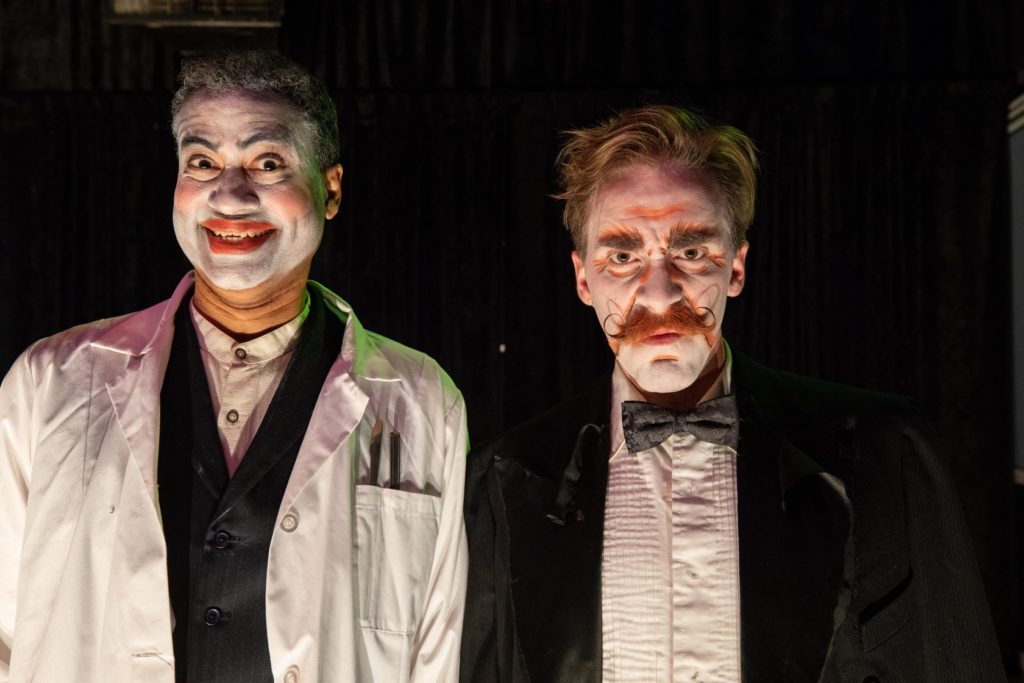 Who We Will Perform For: An Expression on The Deckchairs (Or Make The Titanic Great Again)

Pictured above: (left to right) Paul Bunton and Brian Rhode in The Deckchairs (Or Make The Titanic Great Again)/ Photo: Steven Townshend

Editor’s Note: This is an expression by Zach Barr in response to The Conspirators’ The Deckchairs (Or Make The Titanic Great Again), in the form of an itemized list; it is followed by information about the work.

“We cannot allow ourselves to get distracted. And I am sorry to have been a part of this charade.” — Actress Kate Booth (paraphrased)

“If you liked the show, tell a friend. If you hated it—we’ll perform for anybody, so tell your enemies.” — Actress Kate Booth, five minutes later

We here at The Conspirators are glad you have expressed interest in seeing our play The Deckchairs (Or Make The Titanic Great Again)! Before you attend the performance, we’d like to give just a small warning. This play is not for all audiences. We use a strobe effect during the performance. We also use satire throughout, but the strobe is real.

To this end, we wanted to provide a small cheat sheet for audiences who might be interested in attending tonight’s performance of The Deckchairs. Ask your doctor if The Deckchairs is right for you, unless that doctor is Dr. Ronny Jackson!

#MAGAheads, “Real Americans,” and other sympathizers of the current administration: No. Absolutely not.

RINOs and Social Conservatives: You’d likely be too angry at being lumped together with the other conservative voices in the play to catch onto the incisive satire work being done here. You’ve got to think in the bigger picture, at how your actions are hurting the lower classes!

People who voted for Marco Rubio in the primaries: You should know that this play will heavily imply that you are complicit in the sinking of America that the current administration is perpetuating. Come, but don’t expect to enjoy yourself! Maybe just read Matthew Stewart’s “9.9%” essay for The Atlantic.

People who voted for Ted Cruz in the primaries: You’ll be glad to hear the play contains no jokes about your preferred candidate being the Zodiac Killer, or buying 100 cans of chunky soup. Still, the play will likely make you more angry than engaged. You probably believe that the theatre must be a very safe and special place.

People who voted for Jeb Bush in the primaries: Who?

“Fiscally conservative, socially liberal” people: Nope, don’t think you can have a waffling opinion here. There’s no middle ground in this play. Pick another option off this list or get off the ship.

Wealthy people who just want to watch someone poke fun at the current administration: We dressed up actor Nathaniel Fishburn like this in order to mock you. You probably mentioned to a friend that Hillary’s America looked like it might be interesting.

Poor people who just want to watch someone poke fun at the current administration: Our tickets are only $25. A show at the Neo-Futurists is $15 at most. Hell, every performance at Free Street Theater is pay-what-you-can. Maybe next time you can choose to be wealthier.

Bernie Bros: Well, the bird shows up once. But yeah, Amber Autry plays the character who is closest to your ideology, and pretty much everyone abandons her by the end. Maybe next time learn to work within the system.

People who loved Melissa McCarthy as Sean Spicer on SNL: Get a load of Meaghan Morris as Honeysuckle Saddleman. She mimes sucking d*ck onstage! Well, maybe get a babysitter and leave Pickle at home.

Guilty liberals who like plays that make them feel bad about themselves: This will certainly do that, don’t get me wrong. But consider this: our cast contains only a single person of color! Playing the role of a steward! Do you wanna support that art? Maybe find another story that’s about people of color. There’s gotta be a few running now.

Artists who included the hashtag #NowMoreThanEver in emotional Facebook posts about your art published just after the Inauguration: We truly appreciate the comparisons you’ve made in your head already between our little play and the mid-WWI work of Charlie Chaplin. We would like to kindly remind you that despite The Great Dictator, Hitler still killed upwards of 6 million Jews.

Fans of neo-commedia, the hyper-stylized method of performance used here and in previous Conspirators production The Resistible Rise of Herr Helmut Drumpf: We’re improving daily to nail down our timing and specificity. Opening night might have been a little more untethered than we imagined. This will improve as the production goes on. Maybe see us closer to the end of the run.

The Russians: We would like to offer you discounted tickets to the show. We’d like you to purchase those tickets, but you already hacked our ticketing system to get comps. Well, we hope you enjoy the show. Be sure to tell TZAR NICHOLAS!

People genuinely terrified by the current administration, and the damage it might do to America’s standing in the world for years to come: Yeah, us too. Maybe use the evening to call your senators and make donations instead.

Longtime fans of The Conspirators, who are able to reconcile the message tacked to the end of this play with the play itself, when the two are in direct conflict with each other (and who know that, if the attempt was to pull the rug out from under the audience in the final moments of the play, it should have planted that seed of a message somewhere earlier in the play): Welcome aboard the #Trumptanic!

I’ve never seen a play so cogently argue for its own immediate closure. This is not the backhand insult it likely appears to be, but going into more detail than that would give the game away regarding what The Conspirators are attempting to do with The Deckchairs. Let’s just be spoiler-lite and say that part of the story includes a troupe of actors who perform for the ship’s commander, named D.J. Drumpf. Their play, “Ayn Rand’s It’s A Wonderful Life,” is a satire of the classic film that ends with Clarence and George Bailey of a very different mind about the importance of life. Needless to say, the intended satire goes directly over the heads of every member of Drumpf’s cadre present.

As Miss Lizzie Warbach bellows following this performance, “all major social progress has been lead by art.” But unlike Warbach’s own troupe, who are performing for a captive audience of the very socialites they are insulting, director Bullion and his Conspirators can be ensured that the poster art alone will turn any sympathizers for the current administration away from The Deckchairs. Perhaps this is the point: the intended audience is only those who would mock the administration in such a stylized, neo-commedia style, as the show does. If that’s true, the call-to-action at the end rings hollow. Satire is never enough. But word of mouth is our best method of selling tickets.

The Deckchairs (Or Make The Titanic Great Again) performs until June 30 at the Greenhouse Theatre Center, 2257 North Lincoln Avenue. Tickets are pay-what-you-can, and can be found at greenhousetheater.org/thedeckchairs or by calling (773) 404-7336. More information on the company can be found at conspirewithus.org.