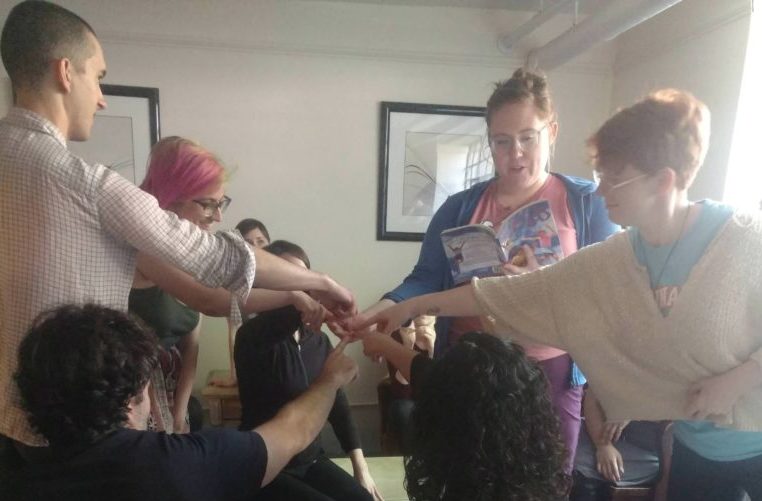 There seems to be a unique hunger for immersive theater. It’s a form that breaks out from conventional theater and allows the audience member to be a part of the story, instead of sitting still and watching it. Many people have participated in immersive theater without even realizing. Whether it’s an escape room, a haunted house or anything else that invites you to explore the world—actively or voyeuristically—it is immersive theater.

(re)discover theatre recognized this hunger and is one of the few professional companies here in Chicago, along with Red Tape Theatre, that performs immersive work as their main venue for theater.

Because of this yearning for immersive theater, (re)discover held an immersive theater intensive on June 24 to help spread the seeds of this growing form and give artists the beginning set of tools to do it for themselves.

The entire experience was very warm and inviting. People meandered in around 9:50 AM. There were many familiar faces from around the Chicago theater scene; actors, professors, directors of all sorts.

When the intensive got started, everyone went around the room and introduced themselves by name, preferred pronouns and what they were hoping to get out of this experience. Co-artistic director Kreitman explained this was, to a certain extent, being put on to try “to find the immersive community in Chicago.” She also said that this wasn’t intended to be a hard and fast way to do immersive theater, but more so offer tips on how not to fail at it.

There were a few minutes of warming up, followed by exercises in practicing connection with an audience. I found these practices somewhat generative, but ultimately helpful.

The first exercise called for someone to walk into the room and stay completely silent. They should be present and stay grounded. Then, they would need to pick someone to follow them out of the room—without touching them or talking to them.

It was a difficult exercise for some. Some audience members felt like they had to follow the performer because they knew the game, but others would vindictively make the performer work for it by staring at them with an angry scowl.

“Just be you! You are enough!” Kreitman would occasionally pepper in from the back of the class.

All of this was in good fun, but it showed how hard it could be to coerce a stranger into doing something that is part of your story if they don’t want to do it.

“You have to have a plan C, D and E, because you don’t know these people,” Schrooten said.

Many tried the tactic of walking into the room with a wild, clown smile, then dancing and waving to try to get people out of the room.

“You don’t need to blast people’s brains out with energy,” Kreitman later said, in response to this tactic. “You just need to invite.”

The next exercise was simply reading a book with your audience member. This, again, built so many interesting choices: some included yelling it from across the room, whispering it in their ear, lying on the ground and making the audience member read it to the performer. Many people felt they had to look deep into their audience member’s eyes and never lose them or else they might get bored.

“Building in time for you audience to break eye contact is so important,” Kreitan said, quickly rebuffing this notion.

Kreitan and Schrooten later broke down how to invite touch to your immersive theater piece, emphasizing consent into this intimate action. Schrooten said the performer should do the action on themselves first, and then show the audience member to gain consent for the same action to occur to them.

“It’s a new relationship: you don’t jump right into kinky sex,” Kreitan agreed, emphasizing how all actions must be built up. “You start with holding hands.”

Therein remained the question of safety for the performer. What happens when an audience member goes rogue? How do you de-escalate a dangerous situation without destroying the world for everyone else? This is also something that would be addressed in the second half of the intensive, but the (re)discover) team emphasized it is absolutely essential for your production to have a safeword. Your production needs to know what it is and what it means when you use it. There was a handout of safety procedures passed out to the workshop participants, and in relation to the basic rundown and utilization of a safeword, it said that there should be:

– The safe word does not need to be shared with audience members. The full team should always be looking out for the safety of the audience

– Have plans for removing audience members if need”

Audience members as an environment

The rest of the first part of the day was focused on how a performer deals with different group sizes. How do you take a performance that is meant for one person and blow it up for 20? This was a great lesson in learning how audience members can sometimes be obstructions.

“How do you use your audience members as your environment?” Schrooten posed this question.

The sure-fire way to know how your performance will work with audience members? Rehearse with an audience.

“You can’t tell someone that the way they play in your world is wrong,” Donahue said. “You simply need that many more plans.”

But this isn’t to say you can’t give your audience rules, Donahue continued.

“Give a how-to list, not a do-not list,” Donahue noted. “And make sure they understand the rules before they enter.”

Both Howe and Donahue touched on the idea of sending an email to audience members beforehand and/or having the rules available in the lobby of the performance. While it might feel too explicit—or not as much fun, initially—once the audience enters, they’ll know exactly what to do and feel comfortable doing it.

Things like design can also key in an audience on how to navigate the space. Reich discussed how if a production team can get speakers in various rooms, audience members can be led through rooms with sound cues,

“Oh it’s quiet in here and loud in there now?” Reich said, demonstrating the thought process. “I’m gonna go where the shit is.”

Achler also pointed out how the workshop was being held in a church basement, and how if there were to be a performance put on in this space, it would be silly to try and ignore the setting.

“Take what you have and work in instead of trying to ignore your space,” Achler said.

After many helpful tips and tricks for creating theater, the intensive broke down into groups, where each was asked to create immersive theater pieces of their own, based on childhood stories. Many took what they learned about utilizing sound, and incorporated singing and banging on the walls to insinuate a monster coming down the hallway. Others switched the roles around in the story of Goldilocks and the Three Bears, in which the audience were the baby bears staying at home, and Goldilocks was the monster coming to eat them.

(re)discover theatre’s upcoming show (feste)val: a masquerade riot will be open August 18 at 4001 North Ravenswood Avenue #504. More information can be found at rediscovertheatre.com

Editor’s Note: While this intensive was joyful, positive and fun for contributor Devin Asperger, there were many different stories, lessons and learning activities that weren’t covered in this article. (re)discover theatre co-artistic director Janet Howe said that they are still working out the details, but plan to do more in-depth intensives soon that will dive into the finer details of making immersive theater.