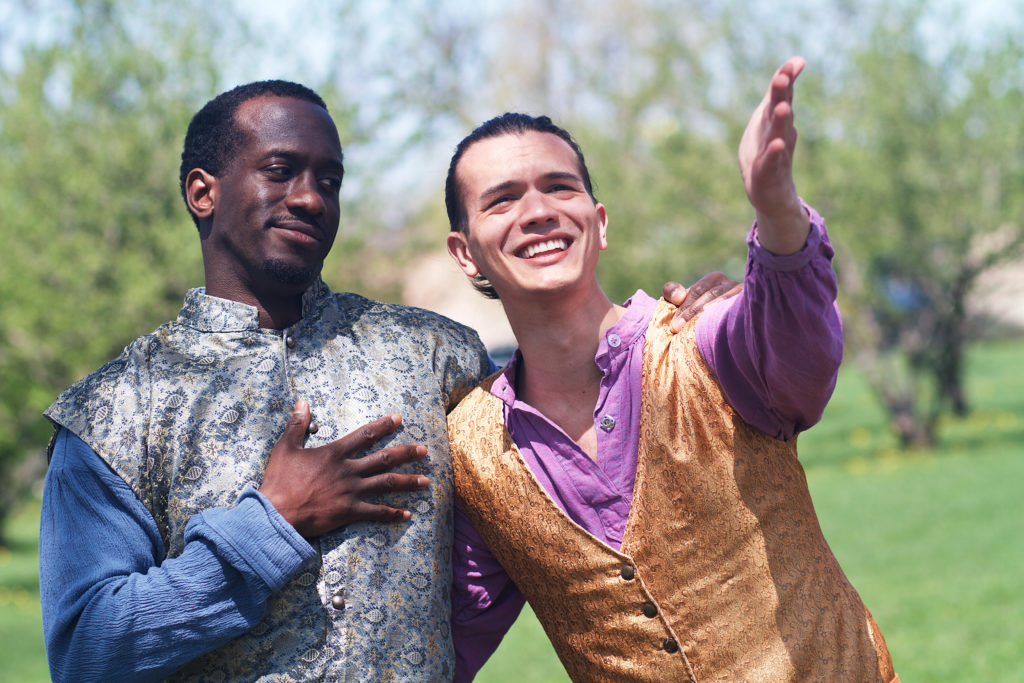 Shakespeare in Your Backyard: An Expression in Response to Two Gentlemen of Verona

Editor’s Note: This is an expression by Olivia Sieck in response to Two Gentlemen of Verona in a monologue form; it is followed by information about the work and process.

I haven’t been in touch with William Shakespeare since I was grueling through an Introduction to Shakespeare course during my senior year of college. Seeing Midsommer Flight’s Two Gentlemen of Verona at Gross Park in Lincoln Square was such a nice refresher—minus the stuffy July weather.

My favorite bit in the production was the Launce, played by Stephanie Mattos, and his dog Crab, played by the adorable Fawkes. According to The Oxford Shakespeare, Crab is known as “the most scene-stealing non-speaking role in the canon.” That’s a huge honor, but I believe that he deserves what to do say during the show below:

I can’t believe I’m stuck on this adventure with this dum dum.

He called me sour because everyone in this crazy family is over dramatic and I’m the positive one in the bunch. My gift to the world is my bright and loveable eyes. I get no respect from it.

I’m not a negative person.

I can’t believe the CAT—THE FREAKING CAT—gets more love than me.

Maybe I’ll change my attitude about life and make myself more like my emotional family. Then I’ll get some love…

These previous eyes will stay and I won’t change them one bit.

I guess I’m stuck on this adventure with him. He’ll spew lies about me. I can take it.

Also, I can talk, you nitwit! You just don’t listen!

Going to see Two Gentlemen was such an entertaining experience. Although the weather was humid at the beginning, I believe that Shakespeare’s ghost came to us during the middle of the show and provided much-needed wind, so everyone could have a fun time.

Every show, there will be pre-show music at each production by local Chicago performers. I had the opportunity to watch Mike Felten, a local blues singer.

Since the show is free, there is no need to reserve a ticket ahead of time. It’s highly encouraged to bring chairs, blankets and food before you fill yourself with so many witty jokes that have been universally loved for centuries. People also came late, or just walked by to see what was going on, as one of Midsommer’s missions is to make Shakespeare accessible to all.

But honestly, my favorite thing about the production is that Crab is played by multiple dogs—and they are all adoptable. Midsommer is partners with two organizations: The Masonic Association of Service and Therapy Dogs and New Leash on Life. They feature their sweet dogs as Crab.