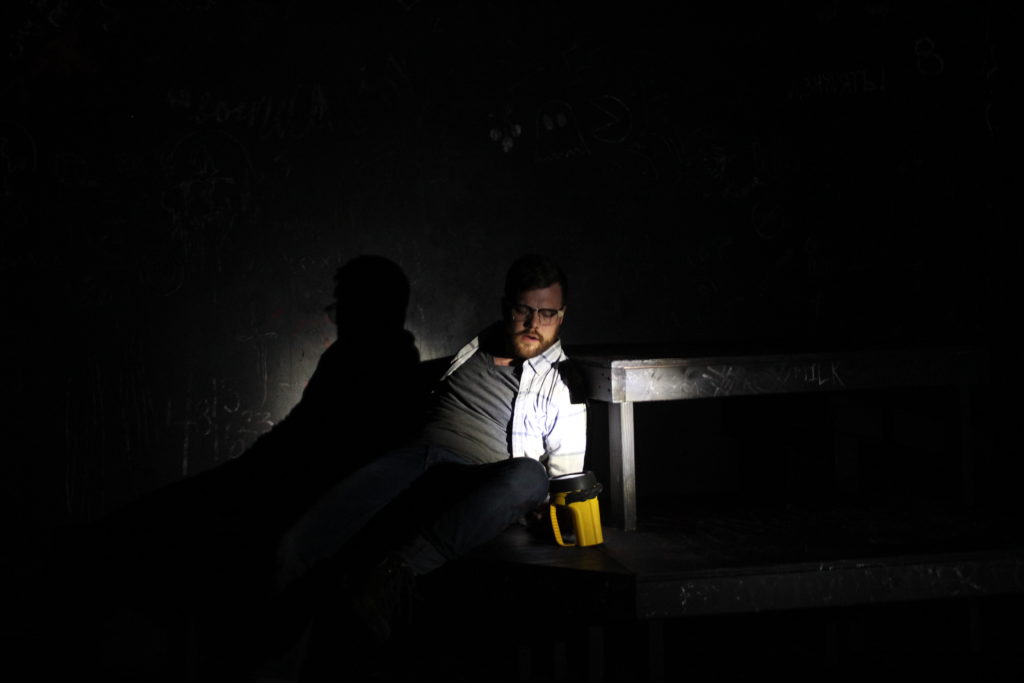 The Labryinth of Apathy: A Consciousness Expression To Odessa

Editor’s Note: This is an expression by Danielle Levsky in response to Odessa in a consciousness form; it is followed by information about the work and process.

CW: Mentions and depictions of death

When we entered Otherworld Theatre, we were greeted by Masha (Alison Schaufler), a spirited, Ukrainian girl who remembered me from the class we had together the year before. I played along, citing the party we both went to that I could hardly remember thanks to that night’s festivities. She promised to lead us to another party, with more friends, in the catacombs beneath Odessa, Ukraine.

We were wedged between a couple and a Ukrainian man from Odessa. I told him my family was from Kyiv. Graffiti and symbols were strewn and drawn on the underground tunnel walls. Most were political in their bashing of authority and/or praise of Ukraine. Some were funny. Many were senseless and chaotic.

As Odessa began and I found myself relating to and caught between the two characters: an American journalist and a Ukrainian woman. As they navigated a dark, abyss-like labyrinth, I slipped into the labyrinth of my own mind.

The decayed bodies in the catacombs of Odessa are about as politically apathetic as the living.

This is my generation—

Funny because I never had the chance to meet those who might be my peers: my capital city wanderers from Kyiv, my funny eclectic folk from Odessa.

There though, on the land for which my family lived for generations, it is a fragile time for political reform, and so the repercussions for political disillusionment are higher.

A representative poll of 2000 people between the ages of 14 and 29 was taken across Ukraine in the summer of 2017. When asked about the consolidation of an anti-reform regime, only three percent indicated that they have participated in a demonstration, in a civil society or voluntary organization or in online political activities.

A similar survey that year probed for the underlying reasons to this apathy and found that the participants felt a lack of trust in politicians (48 percent), a feeling of not having any influence (30 percent) and a sense of not understanding politics (24 percent).

Just before the 2014 February revolution in Ukraine, clashes between Euromaidan and anti-Maidan demonstrators erupted in Odessa. In southern and eastern Ukraine, there was resentment against the revolution.

The city witnessed continued unrest throughout that year. The worst incident occurred on May 2, when 46 pro-federalism (anti-Maidan) and two pro-Ukrainian unity activists were killed and over 200 people were injured during a confrontation.

Kyiv political officials worked with corrupted local elites in Odessa, citing it as the lesser evil. The incumbent mayors in Odessa managed to join their powers following Euromaidan and won local elections by large margins.

The Odessa Catacombs are a labyrinth-like network of tunnels or subterranean cavities created mostly as a result of stone mining (coquina) and are located under the city of Odessa and its outskirts. Half-decayed bodies have been left there for years.

In the underground corridors, it is pitch black. Even with a flashlight and a map, the paths look as though they have been scrawled by Mr. Hyde. Directions and symbols are muddled as if they are only illusions.

In April of 2005 in the catacombs, a photo was taken of three, blank-faced teenage boys looking upon the body of Masha in a narrow, curved section of the cavern. She blended into the cavern’s yellow limestone floor.

Two years passed and, only after a famous journalist delivered a message to government officials, the body was removed.

Somewhere at the intersection of apathy for the political and for life, I imagine this is where Andrew, Masha and Dariya found themselves: trying to live, not knowing what for, and all while navigating the network of underground tunnels of the temporal and the mental.

Above ground, they think there is little they can control. At least below the ground, there is solace in the possibility of an escape.

Set in the world’s largest catacomb system beneath Odessa, Ukraine, Odessa follows the story of Andrew (Logan Hulick), an American journalist, who has been left for dead by a group of Ukrainian scammers, including Dariya (Hannah Williams), a Ukrainian woman. Dariya returns for Andrew to help him escape, but quickly realize they are lost.

Odessa is a new play, written by Michaela Heidemann, directed by Colin David and produced by the Right Brain Project. The flashlights that the main characters hold are the only sources of light for the duration of the performance, where audience members are positioned like the ghosts of catacomb partygoers themselves.

Odessa performances occur at The Alchemists’ Lab at Otherworld Theatre, 3914 North Clark Street through October 6. More information can be found through therbp.org/current-production-odessa.