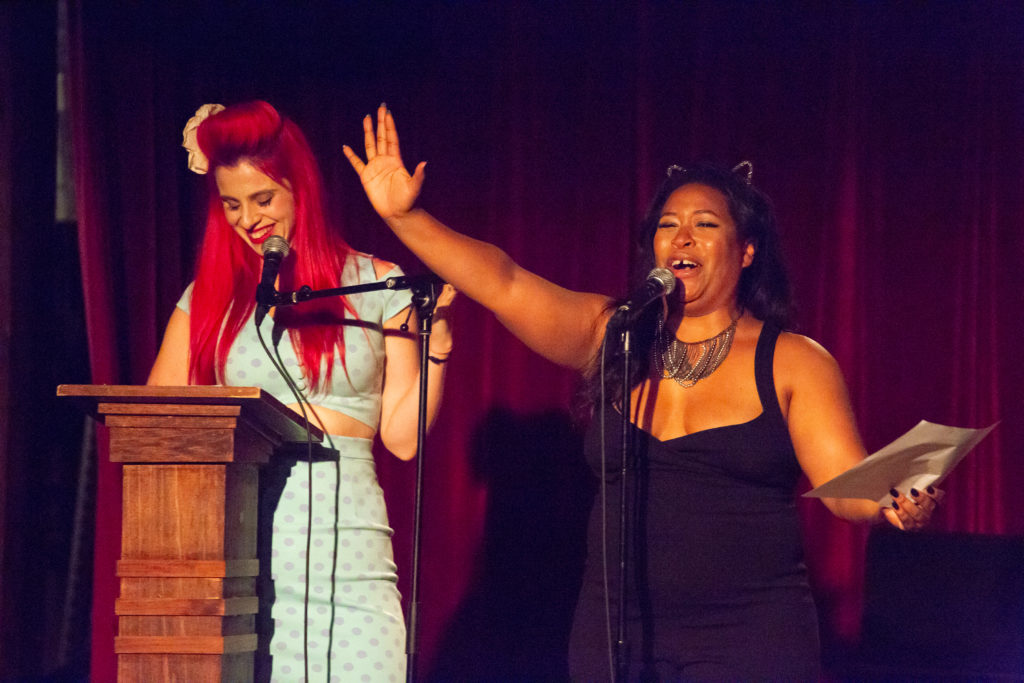 Something Is Something: A Podcast Transcript Expression To A Spy In The Desert

Editor’s Note: This is an expression by Danielle Levsky in response to A Spy in the Desert: Welcome to Night Vale Live Show in a podcast transcript form; it is followed by information about the work and process.

“This is a very Chicago crowd,” my partner said to me as we entered The Athenaeum Theatre. It’s true; the Welcome to Night Vale fan base varied in age and background, but everyone shared a familiar sense of excitement and chill that I’ve become so accustomed to in the Chicago creative community.

Meg Bashwiner opened the touring live show, A Spy in the Desert, with the most entertaining set of audience rules I’ve ever experienced. It was equal parts comedic and political. And this was quite fitting for Chicago, too.

A friendly Midwestern community where the Lake Effect is not very effective, the city lights illuminate the night, and planes fly overhead to dreamy locations while we all pretend to sleep.

To start things off, I’ve been asked to read this brief notice:

City Hall has announced road closures along Lake Shore Drive every other Tuesday and Friday from 5 AM to 5 PM, where a party will be hosted for the corporate leaders of every major Fortune 500 company in the city. This is in an effort to recognize the corporate leaders’ impeccable work ethic. It is is an honor to be invited to these parties. They would like to remind everyone that only those making four times the median salary in the United States are welcome to attend. Also, vampires are allowed. Everyone else is not allowed in the parties.

It is possible you will see the Vampires as you commute to your 12-hour-a-day, minimum-wage job.

Try not to look at the road closures, and especially do not look for any period of time at the Vampires or corporate leaders. The road closures will not harm you.

And now, the news.

Several unionized organizations throughout Chicago are on strike. Though they are striking for different reasons and come from different backgrounds, one commonality they share is they would all appreciate more pudding. If only the corporate leaders of their organizations would increase their pudding by 20%, all would be fair. Corporate leaders have responded that they have provided pudding enough. We interviewed one of these leaders about the pudding problem; they asked to remain anonymous.

“There’s enough pudding to go around,” the source said, as the cracklings of a plastic container of Hunt’s Snack Pack Chocolate Pudding interjected during their response. “We all want pudding, I get it. But we’ve been offering vanilla pudding by the tons, and it’s still not enough!”

If you’re interested in taking home some excess vanilla pudding, go to the North Branch Canal near the corner of North Halsted Street and West Divison Street at 1:34 AM on Wednesday. If a Vampire asks you for directions, ignore them. That is how you will know about the pudding.

A new human came into town today. Who are they? What do they want from us? Why do they dress and appear exactly like the eccentric scientist friend Doc Brown in the Back to the Future Series? Well… We all have dressed up as Doc Brown at one point or another. But why now? Why here? And just what do they plan to do with their miniature DeLorean car parked outside of Dimo’s Pizza on North Damen Avenue?

No one does a slice like Dimo’s. No one.

Just a reminder to all the parents out there: let’s talk about safety when taking your children out to play in the underground tunnel between the Loop and O’Hare International Airport. Make sure they have water packed with them that has been approved by Ulon Mosk’s Dull Company and that they keep an eye on the miniature traffic light.

The 12-minute trains run every 28 minutes, and the traffic light will begin to glow a bright, fuschia color. It’s hard to make out, but the words “LEAVE NOW” are inscribed in the center of the traffic light in iridescent tones.

The Dull Company has acknowledged and apologized for the accident that occurred with the five LaCroix Pamplemousse beverage cans last week. They had absolutely no idea that the iridescent tones of the traffic light would cause the cans to grow comically large and swallow the children whole.

All children have been returned to their homes as of yesterday at 6:32 PM. The faint scent of citrus and the ruby red tint to their skin should fade within five to 20 business months.

We received a press release this morning. The Chicago Business Association is proud to announce that Chicago now has $7.1 million of assets available to pay bills totaling to $47.6 quintillion, I’m sorry—that’s $47.6 sextillion. They would like to re-emphasize that the Dull Company tunnel was of utmost importance to our Vampires and corporate leaders and that we should be very proud of our assets and tunnels.

Settling in to be another rainy night and cicada-filled evening here in Chicago. I hope all of you out there have someone to sleep through it with. Or, at least, a house insect to accompany you.

Today’s proverb: It’s not the best option, but it’s something. And something, is something.

Mal Blum was the show opener/musical guest. The show itself starred Cecil Baldwin, Symphony Sanders, Meg Bashwiner, live music by Disparition, Mal Blum as “The Weather” and a few, surprise recurring guests from the podcasts—including a performer originally from Chicago.

As much as Welcome to Night Vale has matured over the years as a podcast and the story, the characters have become more clear, and the mystery within the setting of the town of Night Vale had diminished. It’s something I’ve quite missed; the function of the city as a character. It’s something that always made the podcast unique for me.

The play between citizen and journalist and the theme of secrets that peppered throughout the live podcast recording was interesting and evoked both fantastical and current events occurring in the United States today.