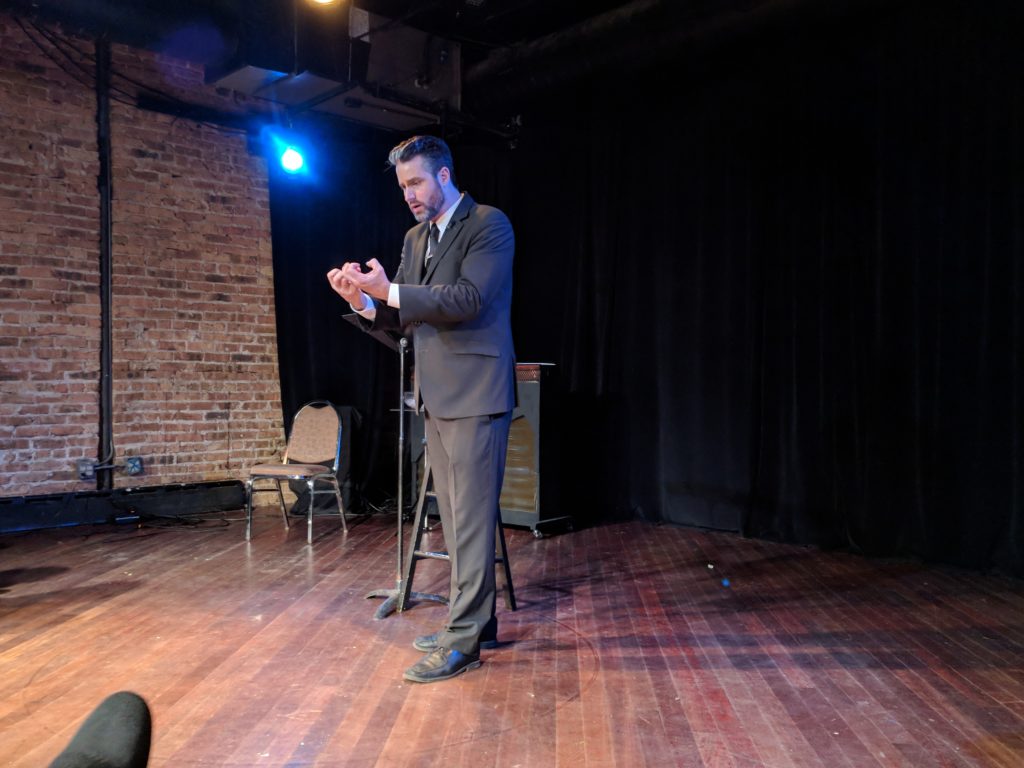 Playing Tricks With The Dead: A Consciousness Expression To The Seance

Pictured above: Thom Britton at the Prop Thtr performance of The Seance on October 13/Photo: Courtesy of The Seance

Editor’s Note: This is an expression by Amanda Finn in response to The Seance in a consciousness form; it is followed by information about the work.

Good, my Catholic guilt complex relaxes a little. It’s wrong to interact with the dead. But it’s a theater performance. Even so… There’s that pang of guilt again.

I coined myself the “weird story writer” at the State Journal in Wisconsin. I wrote about occult performances, haunted storefronts, haunted house performers and then finally, a theatrical seance.

But this time, no Ouija board. No Teddy Roosevelt portrait hanging overhead.

No planchet to move on its own. How did he do that? My last seance performer said there are often things he doesn’t anticipate or understand that go on. What will happen tonight?

We are seated in chairs in front of the stage. We aren’t around a table. There is some comfort in being a little further away.

But I want to be near the action. And also to be in the back. My introversion is taking over.

Just drink the Pinot. It chills out that Catholic guilt pang. Sorry, Grandma. I’m squished between two couples in the second row. It’s been a long day.

Jonathan is passing out cards. He’s telling people to write down your name, another name, who that person is to you and something only they would know. A few people turn him down.

I flag him down.

Amanda. Danny. A dear family friend. I used to draw lions for him when I was little.

I assume everyone else writes down a parent or grandparent—I’m mostly right. I made mine trickier. Was that ok? How do I fold the paper? Half! Quarters? Shoot.

Jonathan collects the papers. I’m fixated on the clear bowl they are sitting in on the stage.

Thom comes out. He tells us of the history of Victorian seances. He tells of the Fox sisters and the Spiritualism movement they impacted. A presence in their home would respond to questions with knocks. It astounded people. The Fox family abandoned the home.

I would have too. Probably. Maybe? I don’t know. I’m pretty sure my childhood home is haunted. My mom and I have both heard the rapping of dog paws. We’re pretty sure our beloved Lucky is still around somewhere.

Dogs have spirits. If people have them, then dogs do too. They’re better than people. I can’t defend that with scripture, but I think they do. Lucky is in my childhood home. Or somewhere better. Maybe both?

Thom then tells us of Thomas Lynn Bradford. A Detroit man who, in 1921 committed suicide as a means to prove spiritualism to be true. He would communicate with someone after his death to prove the afterlife exists. No one has ever proven the communication.

Are they going to contact Bradford? If they do, Houdini’s wife Beatrice is going to roll in her grave somewhere. How did Beatrice deal with Harry?

Mary Todd Lincoln did seances in the White House. I chuckle. Can you imagine them doing that now? I wonder what White House spirits would think of Donald Trump. I wonder if Nancy Reagan and Mary Todd would’ve gotten along.

We need a Department of Seances.

After educating us on the history of seances Thom introduces his dear friend and colleague Jonathan.

Jonathan tells us he will reveal some of his tricks as a mentalist to the audience. But not the volunteers who take part in the tricks. We’re in on the secret of how the hanger moved around a woman and how a person on one side of the stage felt a tap that Jonathan gave to a person on the other side of the stage.

I won’t ruin that. It was delightful to be part of the magic.

Jonathan grabs the bowl of papers. I’ve seen something like this trick before. I have no idea how he does it. Thankfully no one wrote down anything political this time around.

He knows what is written on the papers. He calls out the folks who try to trick him by writing a question instead of an answer. He throws a few people off by naming the deceased person first.

He chooses several papers indicating audience members, naming their loved ones, their relationships to them and something only that person would know. Like “smackaroos” (kisses) for a grandfather or a childhood nickname.

He doesn’t choose mine. That’s alright. Even if it’s just a trick, Danny wouldn’t have liked the occult aspects.

And although we aren’t as easy to impress as the Victorians the performance seems to give some relief to a few folx. Even if there are no spirits around, it’s nice to “hear” from them sometimes. I get a little pit in my stomach. I miss Danny.

The show ends. Jonathan and Thom are a duo I’d love to see again. People line up to get posters signed. I step aside to call an Uber.

I wonder if Danny would remember the lions.

Jonathan Pritchard and Thom Britton bring their Seance show to audiences around the country. Their upcoming performances will take place in Detroit on October 19.

The duo describes their show as “a spook-house show for the smart set.” It’s not a ghost tour or a true to life seance. It’s a history lesson in what we don’t know.

More information on The Seance can be found at weplaywiththedead.com.