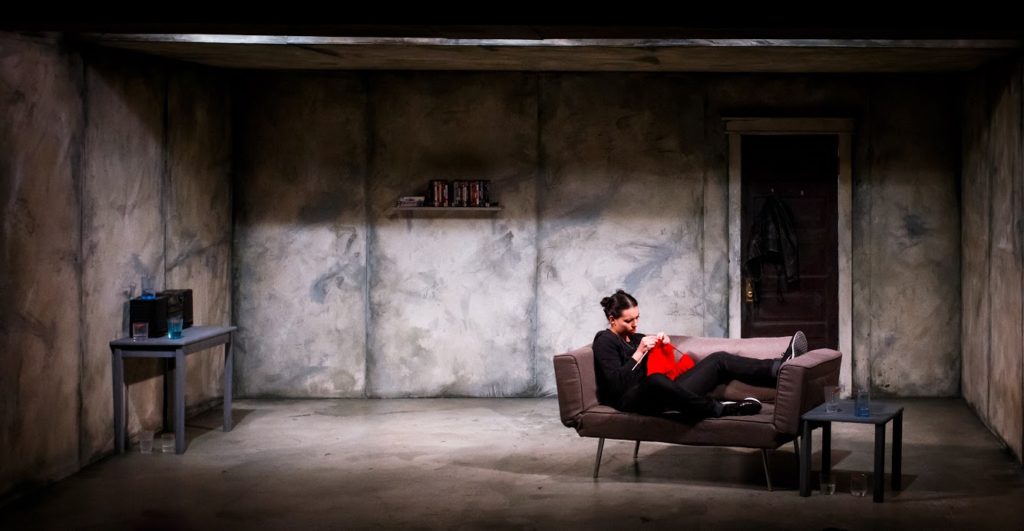 More Than Ever: An Expression On Jackalope Theatre’s In The Canyon

Pictured above: Paloma Nozicka in In The Canyon/Photo: Sarah Lawson

Editor’s Note: This is an expression by Zach Barr in response to In The Canyon in a news-cyle form; it is followed by information about the work and process.

Calamity West’s modern epic In the Canyon follows one character over the course of five scenes: all take place on January 20, but the year changes from 2007 all the way to 2067 by the play’s conclusion. In that vein, here are a collection of news articles about the play from the past, present and future.

…with the upcoming election between senators Obama and McCain, Calamity West’s story feels more timely than ever. In The Canyon offers a nightmarish glimpse into a worst-case scenario for the world, should the Supreme Court’s 1973 Roe v. Wade ruling ever be overturned. While I have questions about the logistics of West’s imagined future (the issuing of subpoenas against women who have had abortions feels far-fetched), there’s no doubt of the effectiveness with which the cast of this production absolutely sells its premise.

Plenty of media have depicted the collapse of American society, but few have done so with the detail that West applies here. The heart can be sucked into the harrowing tale of Hope, the aptly-named protagonist, and her descendants, even as the upper brain assures us that there are safeguards in place to prevent the specific scenario depicted in the play…

…not only his confirmation to the Supreme Court, but the additional release of the UN climate report suggesting we might not survive to West’s proposed 2067. As such, the play is oppressively grim, a feeling assisted by William Boles’ claustrophobic scenic design and some truly bravura performances. The evening’s standout in a cast stacked with talent is Liz Sharpe, playing ages 20 to 50 with remarkable success. As the stakes constantly rise, Sharpe is forced to meet them, pushing her towards a breaking point. It’s harrowing to watch; it’s also great theater.

I mentioned not two sentences ago that “the stakes constantly rise” throughout West’s play, although that’s not entirely accurate. For the characters, certainly: more is at stake with each passing scene. What gives West’s play its crushingly dire atmosphere––and makes the play a more effective call to action than many others––is a prevailing sense that, as one character phrases it, “the noise was always there; it just wasn’t as loud before.” With the midterms coming up in less than a month, West’s cry for her audience to hear the noise before it grows louder resonates…

…that even ten years on from its premiere, West’s early work In The Canyon feels as relevant as ever. The decision to stage this revival on the cusp of the presidential election is an obvious statement against the Government [with necessary respect]––the original production was staged on the cusp of the 2018 “Red Wave” midterms. Looking at West’s depiction of a “future” 2027 now is somewhat quaint: no formal film bans have been put into place, and water (at least in cities like the one Hope lives in) remains plentiful enough. Still, West’s vision remains within the realm of future possibility.

Other predictions have come painfully true. The original In The Canyon premiered in the final days of Roe v. Wade, and the criminalization of ******** has hewed discomfortingly close to the play’s predictions. Whether or not the play’s Orwellian second act will come to pass remains to be seen––although recent comments from the President [with necessary respect] will mean that West, who has continued writing despite outcry from the Mayor’s office regarding her play Affirmative last spring, shouldn’t sleep quite so soundly yet…

…with regards to the federal Protection of Public Discourse Act (2029); Section B Category 5: “art with intent to incite violence.” Determination by the public court is that the Defendant’s actions in staging a production of the offending play, In The Canyon, violates this clause, as worded in the law. Prosecutors have also indicated the programming surrounding this production, including a discussion to take place following the October 25 performance, entitled Women’s Health: A Timeline. Descriptions given of this discussion make explicit mention of Roe v. Wade and ******** by name. The description of this “talkback” also lists a party by the name of “Elizabeth Sharpe” as a contributor, which would indicate a violation of the Women’s Rights of Discussion Act (2034), serving as a “contributor towards the spread of misinformation” as defined by the legislation. Sentencing will be carried out by an agent of the Government [praise be], and is expected to be handed down within the coming week….

…chanting “First Amendment!” “First Amendment!” on the streets outside of the Chicago Water Tower. The Water Tower, itself formerly the site of a theater company, is now believed to be the location where the executions of three woMen with connections to the March 8 public reading of In The Canyon took place. Public reactions have been sharply divided since the arrest of the artists.

“There used to be something called Freedom of Speech,” said Mrs. Adam Benton. “But now, no Senator has mentioned the First Amendment on the floor of Congress in 308 days. The punishment of these artists is a tragedy.”

Others are more supportive of the Government [praise be] and their actions.

“Most people would see execution as an extreme response to a play reading,” said Mr. Doug Baumann. “Imprisonment, perhaps. Then again, I don’t know the content of the play. Perhaps it was warranted. It all seems suspicious.”

As this goes to print, protests are just beginning their third day at the Tower––and some indicate no end in sight.

“I know the play,” said an unmarried woMan who asked to be named only as L.S. “And I know the power of that story. To prevent it from being heard is a disservice to Chicago, and to woMen nationwide…”

No news regarding In The Canyon reported.

No news regarding In the Canyon reported.

…but prior to the 2019 court ruling, information regarding The Procedure was available publically and was discussed openly in media. In the arts, many now-banned works defended The Procedure, including the films If These Walls Could Talk (1996), and The Cider House Rules (1999). However, it was a stage play, In The Canyon (2018), that encouraged lawmakers to protect the public from misinformation about The Procedure, after a high-profile 2042 production of the play in New York. This led to an expansion of the Protection of Public Discourse Act (2029), with new amendments to the law passed in 2043 and 2044.

1. Which court case began the 46-year period where The Procedure was legalized?

2. How many infants were estimated to have been killed in the final year before The Procedure was made illegal?

In The Canyon performs until November 24 at the Broadway Armory, 5917 North Broadway Avenue. Tickets are available at Jackalope Theatre’s website jackalopetheatre.org/inthecanyon, along with more information about the show and company.