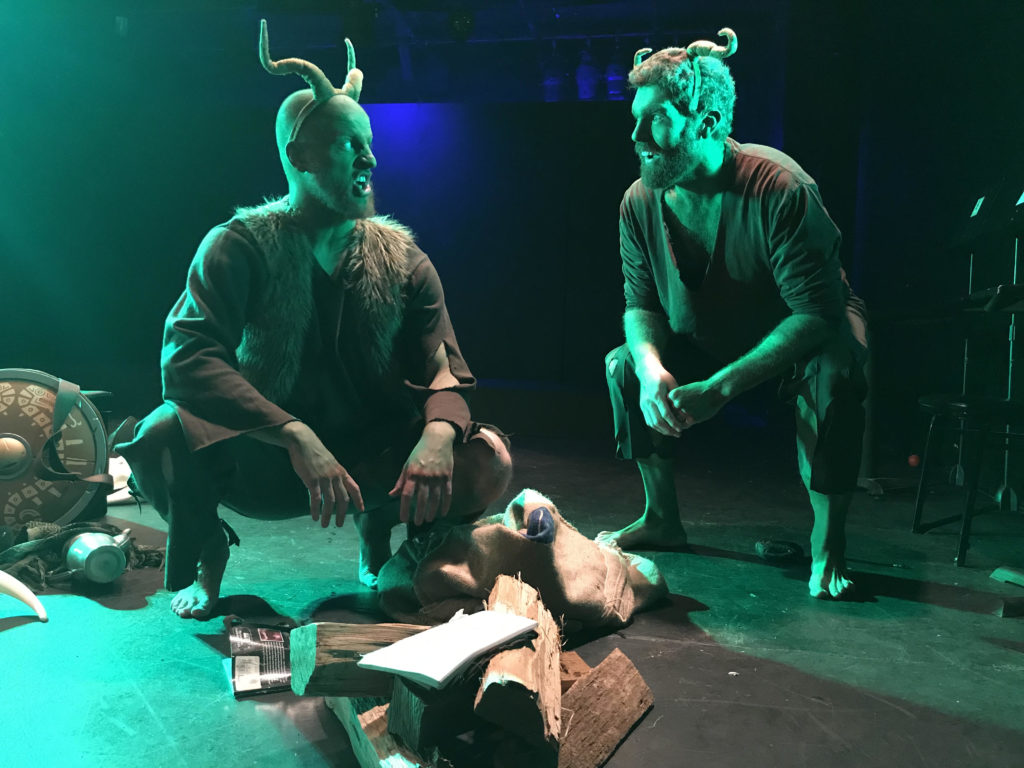 Pictured above: (left to right) Matthew Perry Smith and Rich in Williams in The Trolls, by Steven Townshend, part of the PARAGON Festival/Photo: Otherworld Theatre

Editor’s Note: This is an expression by Zach Barr in response to Otherworld Theatre Company’s PARAGON Festival, in the form of a role-playing campaign; it is followed by information about the work. The author also wishes to disclose that he has directed for the 2017 PARAGON Festival, but has had no involvement in this year’s festival.

Otherworld Theatre Company is one of those wonderful smaller storefront groups in Chicago that is entirely self-sufficient and comfortable working on their own projects in their own sought-after niche. Rarely will you see them bring in a hot-shot Chicago director or actor for their projects, because their focus has never been on virtuosic performances or world-class production values. Their strength, the one that keeps me coming back to their productions, is their insistence and mastery of atmosphere—that intangible element that identifies Sci-Fi and Fantasy adaptations as products of genuine love for the source material.

It’s the glow of the crystals, the spark of the magician’s wand, the grime on the boots of a starship ranger.

You arrive at the Otherworld Theatre Company’s space, formerly the home of the Public House Theatre. The cramped storefront lobby is packed with geeks of all ages, come to revel in the telling of tales and the sharing of passions. The occasion is the fourth annual occurrence of Otherworld’s PARAGON Festival—a collection of short plays set in Science Fiction or Fantasy settings.

You make your way past the throng of winter coats to the box office, a squat window set into the wall. A cheery man greets you.

You move to purchase tickets.

The program is your ticket. The 11×17 sheet details the forty plays that will perform over the weekend, representing writers from three countries and, by your count, nearly a hundred performers.

The Otherworld lobby is dimly lit, with high walls covered floor to ceiling with the oil paintings of local artists. Just above the entrance to the main theatre, The Bradbury, a papercraft dragon head is mounted to the wall.

You hear a call that the house is open.

You walk into the space to find about seven rows of seating before an empty black box space. The audience is beginning to fill up.

You sit in row two, but eventually, another group sits in front of you, blocking part of your view.

The lights go down, and the first play begins. It’s about two smugglers discussing the transport of a humanoid robot from one planet to another.

The costumes are simple, obviously put together quickly from whatever the actors owned, but they get the point across. The action is simple — most of the play spent standing and talking. At least the central idea about bodily autonomy comes across as genuine.

Play #2: at first glance, it seems like this play is just some people waiting at a bus stop. But then…there it is, one of them is a humanoid robot. Typical. One of the actors is quite engaging, however. You attempt to pull your program back out to check their name.

You effortlessly unfold the program, and the light from the stage lets you clearly read the names. Throughout the play’s fifteen-minute run time, you focus your energy on that actor’s performance and generally make it through all right.

The next play has a fantasy setting.

Of course, there are swords.

About halfway through, you consider that this play might be your favorite of the bunch. Well crafted narrative, engaging performers, and a few plot twists that give the evening more punch. The moral is a bit predictable, and the twists only possible due to a 25-minute run time. Nonetheless, you never find yourself bored.

The final play of this block, before a 15-minute break, is another Sci-Fi play. There’s a man with a gun. A woman in a silvery jacket. Another performer is pacing back and forth upstage. Someone mentions something called the “Farragut Initiative.”

You don’t have a clue what’s going on. Focusing your attention, you catch the words “free will,” and determine that it must be the play’s central thesis. Why not.

The play ends, and the house lights rise between blocks.

You feel bad criticizing the production elements of PARAGON too closely, given the festival’s simplistic nature and the earnestness of all artists involved. Not to mention, you recollect, the Fantasy and Sc-Fi genre aren’t often given the appropriate respect they deserve. Calling out PARAGON for “not taking itself seriously” seems to be missing the forest for the elves somewhat.

You conclude that the genuine nature of the performers holds the evening together, As well as a few standout pieces of writing within the short plays.

You can stay for another block.

As the next plays get going, the first is…well, the man at center is holding an American flag.

Another actress is now referring to Flag Man as a “fascist” and claiming he has violated International Robotics Law. You sigh.

The next play is also Sci-Fi. A parent and an engineer hold a long discussion with an offstage voice, apparently an astronaut or other space explorer. The conversation is well-written and emotionally gripping.

Both actors knock it out of the park, although you quietly wonder if this specific futuristic setting is applicable to our current day.

Play three, a longer one, is also Sci-Fi. You make a mental note about the lack of fantasy in this “Sci-Fi and Fantasy” festival.

So, of course, it’s more zombies. The makeup is well realized, and the script does have more than a few moments of charm to it. Short plays always feel so much more like variations on a concept that fully realized narratives — well, save for the offstage astronaut one.

The block ends, and you consider the program again.

The play in which you caught “free will” seems to sum up the evening. While no play except the “fascist” one has made the connection explicit, all of the works at PARAGON seem to be centered on questions of freedom: how we can achieve it, why we desire it, what happens when others abuse it. The dearth of fantasy implies a fixation on an uncertain future — call it the artist’s self-assurance that there will be a future to prove their play wrong or right at all. It’s this point that rings truest of all to you, beyond questions of costume or acting ability.

You stretch your legs in the lobby. A few people are leaving after this block.

For all its wild variance in tone between plays (which can lead to awkward moments when a comedic take on the Faustus myth is followed back-to-back with what can only be described as torture fetishization), PARAGON captures this aesthetic marvelously. It’s not for everybody, but neither are the two genres that Otherworld has exerted so much effort to craft a haven for. Everyone working on a play here is committed to the narrative, and to the preservation of that aesthetic that dares to see something true about ourselves in another universe.

Embrace the camp, and you’ll enjoy the trip through the stars.

PARAGON Festival was performed in November at the Otherworld Theatre Company, 3914 North Clark Street. The company’s next production, The Winter Wolf, begins performances on December 6. For a full list of events, including Improvised Dungeons and Dragons, visit their website at otherworldtheatre.org.