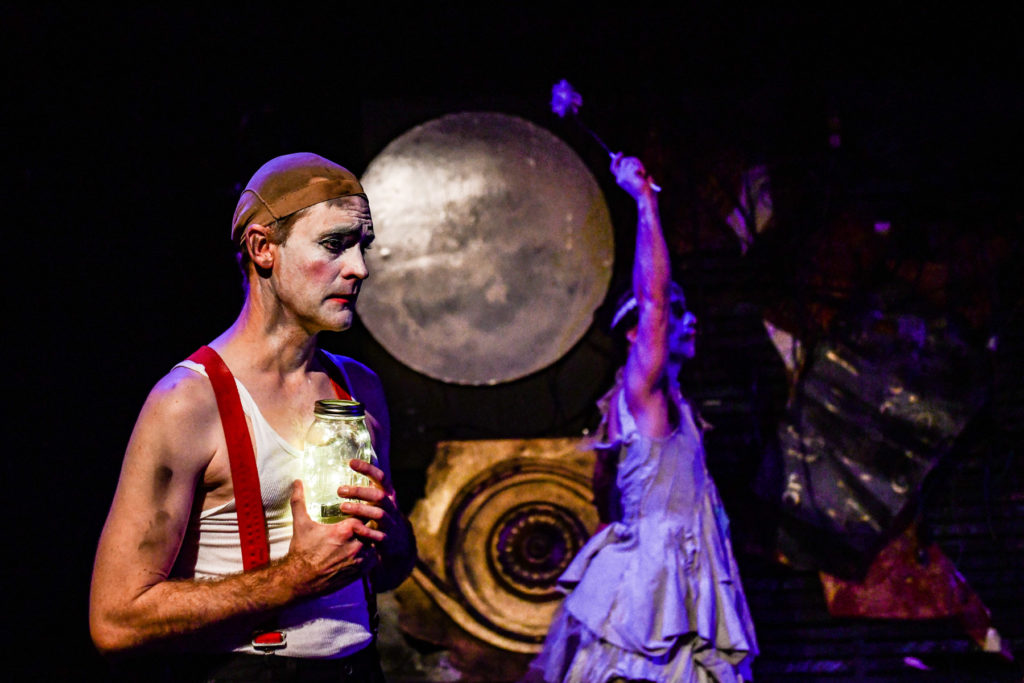 The Bluebeard You Don’t See: A Dry Class History Response to Burning Bluebeard

Pictured above: (Left to right) Ryan Walters and Crosby Sandoval in The Neo-Futurists and The Ruffians’ 2018 production of Burning Bluebeard/Photo: Evan Hanover

Editor’s Note: This is an expression by Felix Abidor in response to Burning Bluebeard in a historical essay form; it is followed by information about the work and process.

Three body-bags litter the stage when the stage-manager enters. Lighting a lantern, he places on the wall behind him a large cutout of the moon. Together, the body-bags move and from them emerge the key-players of one of the most fateful theatrical events of the 20th Century: the 1903 Production of Mr. Bluebeard. This response will explore the economic and cultural forces less visible onstage, but no less important in causing one of the worst disasters in modern American history.

For those of you unfamiliar with the story of Bluebeard, it goes something like this:

A man named Bluebeard (named for his beard, which is blue) has had six wives. Each wife mysteriously disappeared. So, he gets a seventh wife (this story takes place in a time before red flags were invented). Even though Bluebeard is ugly, the wife falls in love with him. One day, Bluebeard goes on a trip, leaving his wife. He gives her a key to his secret room and tells her not to open it. She opens it anyway. Inside the room, she finds the decaying, bloated corpses of Bluebeard’s six previous wives—sorpresa! Bluebeard discovers his wife’s indiscretion and decides that because of it, she must die. She tricks him into allowing her to hide and calls to her brothers for help. They then kill Bluebeard, making her queen.

This story is misguided for reasons beyond the Game of Thrones-esque violence nested in what is ostensibly a children’s story: we can write that off as the product of a time when executions and lighting cats on fire were considered family fun. The story is misguided for where it places the blame. It seems that by opening a door to a room in her own goddamn house, our unnamed heroine invites the wrath of Bluebeard. Curiosity is not a capital offense; she was living with a murderer.

Let’s talk about how this relates to the show. Burning Bluebeard follows the stories of several actors, acrobats, clowns, and stagehands involved in the Iroquois Theatre’s 1903 production of Mr. Bluebeard. In one of that show’s matinees, a light bulb exploded, initiating a building fire that claimed the lives of over 600 people. Understandably, many of the characters express intense remorse and fear of performing the show, as if by entering that space, they are inviting the wrath of another fire.

One moment stands out in particular: During the actual fire, many of the actors attempted to escape through a stage-door. The door was locked, but a stage manager fought and eventually pried it open. In doing so, he created a funnel of fresh oxygen which turned the erstwhile manageable flame into an inferno that exploded into the audience, causing many of the fatalities. The character of the stage manager (Jay Torrence) has internalized the blame for the fire’s exacerbation and labors to explain why he opened that door. Many of the other cast members have similar moments—they feel that, by doing what they could, they made the fire worse.

This theme stuck with me, and I was originally going to write this piece about all the times that we do something with the good intentions, only to make things worse. Then, I started to get mad. Why is that stage manager blaming himself? Did he actually do anything wrong? The answer is no. From a historical perspective, none of the characters in the play had any real agency over the events that really happens. The true villain in the story is the one unseen.

The story of the Iroquois bears remarkable similarities to the story of the Titanic. Constructed in 1903, it reflected the growing demands of the rapidly growing city. At the time of its construction, Walter K. Hill of The New York Clipper claimed that “few theatres in America can rival its architectural perfections.” The syndicate that bankrolled its construction designed it to attract out-of-towners who came to the Loop to shop and described the building as “fireproof.” It opened on November 23, 1903. The fateful matinee was a little over a month later.

Later, history writers—perhaps in an attempt to find some silver lining to a horrible gray cloud—attested that the tragedy formed the impetus for modern fire regulations. This interpretation is plainly wrong. There were already regulations, the theater simply did not follow them. Among its violations were the lack of adequate fire alarms, automatic sprinklers, marked exits, or fire extinguishing devices. Though there was a flue on the stage that could have allowed the fire to escape without reaching the audience, it was boarded shut—as the playwright notes. Regulations were there. The syndicate that built the theater simply did not follow them. Whether that was because of ignorance or greed, they did not follow them. The characters in this play are victims of circumstances though beyond their individual control were entirely preventable.

To be clear, this is not an assault on the writing, directing, or performance of the play. In a break from the editorial guidelines of this magazine, I want to make clear that I liked it very much.* Next year—or whenever Torrence and co. again manage to summon the undoubtedly massive strength necessary to authentically recreate such a terrible circumstance, you should see it. When you do, however, be aware of the Bluebeard that you do not see, the one that the text only hints at: the Bluebeard of good ol’ corporate greed.

Burning Bluebeard recounts the story of the Iroquois Fire of 1903. A cross-section of the players involved in the original tragedy have returned to the space—stage managers, actors, acrobats, comedians, and the personification of evil—in an attempt to redeem their disastrous performance and themselves. There to assist them is The Faerie Queen, who directs them through scenes, dances, and songs reminiscent of the pantomime format of the original show. Constantly lurking in the distance is the prospect of performing the dreaded second act: the act in which the fire started the claimed the lives of 600 people. Is the play cursed? Is the space dangerous? Did anyone do anything wrong?

Burning Bluebeard is a production of The Ruffians and The Neofuturists. It is based on the 1903 Iroquois Theater Fire. While future productions have yet to be announced, it often performs between Christmas and New Years. For more information, visit goruffians.org or neofuturists.org.

* Scapi Magazine does not publish traditional reviews of theater and performance art productions, hence the comment made by the contributor.