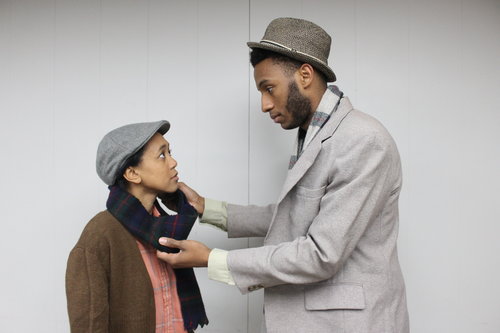 Bicycles in a Time of Email: An Expression to Bicycle Thieves

Editor’s Note: This is an expression by Felix Abidor in response to Bicycle Thieves by Littlebrain Theater as a part of Rhinofest 2019.

An unemployed man lands the job as a poster-paster. In order to hold such a coveted position, he needs a bicycle. The only problem: his bicycle is stolen on his first day. As a result, he goes on a surreal adventure through the streets of 1948 Rome, occasionally accompanied by his friends and oft-misplaced son; his search takes on increased desperation as the bicycle escapes from his grasp.

It is a basic bicycle, not particularly fancy. The back tire is leaky, and it looks like every other bicycle in Rome, apparently. The answer is obvious: he needs it to keep his job. Why he can’t poster the city using their abundant mimed transportation is never explained. Probably some suit at a desk deciding that it is an item of need. Such a mundane item is required to keep such a mediocre job. Such a mundane item to send him to the brink of letting his son drown. To the brink of being sent to jail. How could postwar Rome be so backward? What a time of yokels and cranks!

Then, of course, we in the post-capitalist present have our own bicycles—our own tickets to playing the game. Here is a list of modern-day bicycles:

In the context of a modern pay-for-play society, where the game is not particularly profitable or interesting, Vittorio de Sica’s original desire for a bicycle seems quaint.

Using devised movement and mime, the ensemble richly captures a period in history we frequently write off as removed. The delightful irony is that as it is performing at Rhinofest, it is one of the few experiences in the city that you do not need to pay to have.

Bicycle Thieves performances occur on Fridays at 7 PM until February 22 at the Prop Thtr at that company’s 30th Annual Rhinofest, 3502 North Elston Avenue. More information can be found at rhinofest.com. Tickets are $15 online or pay-what-you-can at the door.