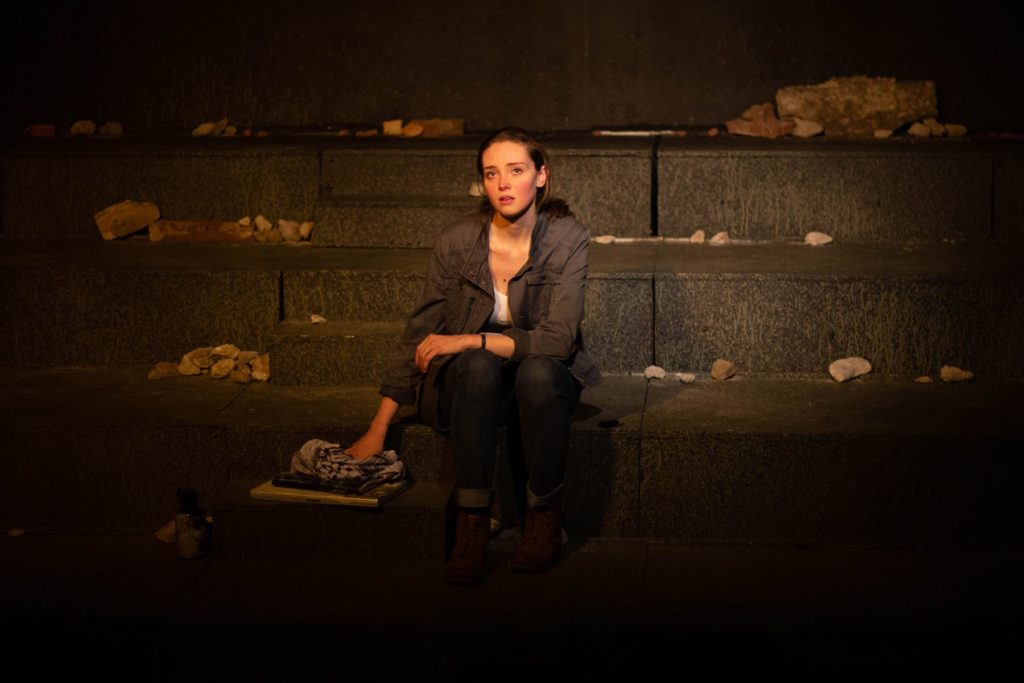 A Stepping Stone, Not a Destination: An Expression to My Name Is Rachel Corrie

Pictured above: Halie Robinson in rehearsal for My Name Is Rachel Corrie/Photo: Zeke Dolezalek

Editor’s Note: This is an expression by Taylor Imel in response to My Name Is Rachel Corrie; it is followed by information about the work and process.

On March 21, Jacaranda Collective’s inaugural production My Name Is Rachel Corrie ran its first preview. The show was directed by Jacaranda Collective member Sam Bianchini (artistic director) starring also-member Halie Robinson (associate artistic director). My Name Is Rachel Corrie is a one-woman show based on the journals kept by 23-year-old Rachel Corrie. Corrie traveled from the US to the Gaza Strip during the height of the Second Palestinian Intifada in 2003. Three months after her arrival, Corrie was killed while protesting the demolition of a Palestinian pharmacist’s home. Corrie’s journals were made public and picked up by actor Alan Rickman and journalist Katharine Viner, both of whom co-adapted and wrote its staged version.

Three things occurred once I left the theater steps: I crossed the street away from the crowd, I got on the train and I cried. All in that order, so one would not overlap with the other.

I came home to have a conversation with my partner about Rachel’s story. On my lap, I was reading articles about her, about the ISM (International Solidarity Movement), about the history of the Gaza territory. My partner and I were going back and forth about what we knew of the conflict. In all of this, based on our knowledge and Rachel’s words presented to me that night, we were trying to determine: what is the result of what Rachel had done? What is happening now, because of Rachel? Had Rachel’s actions changed something?

Speaking specifically to the bare bones of Rachel’s words and their trajectory to publication: the conversation between my partner and me struck me as unfair. What can one person do for a conflict with a history more endowed, more populous than her? Was she being put as the face of an issue? In U.S. culture, short of committing a crime, people generally do not question the dead. What right did we have to question anything?

What could Rachel have done that she didn’t?

From what I listened to of her journals, in her lifetime, Rachel was not actually trying to do anything for the general public. She was not trying to be the face of the Iranian-Palestinian conflict. She was working to aid a crisis larger than her. She had been peacefully protesting the demolition of a pharmacist’s home when she died. A thespian and journalist took her words and collectively turned them into a play.

When Rachel’s words were turned into a play, it became time to ask these kinds of questions. To not ask such questions is to be missing the point of theater and the points I listened to Rachel propose in her own writings which led her to Gaza.

There is a moment in the play where Rachel (Halie Johnson) describes her first time out of the U.S. on a visit to Russia. “I was awake. For the first time, I was awake,” she said. The script goes on to describe the sunset Rachel saw from her plane window on the trip back to her hometown in Washington. “(The sunset) wasn’t enough to make me glad to be home,” she said. From then on, the script took a turn to involve conversations between Rachel and her mother about why she wanted to travel to Gaza. The script details that in addition to her taking college courses and increasing her awareness of global activism of the time, a portion of her motive was linked to evolving the content of her writing.

“How am I supposed to write without seeing,” she journaled. “There’s a chance that you might be changed by what you’re looking for.”

If after experiencing the play, I analyze Rachel’s words and actions and perceive them as an agenda to orchestrate a conversation of the Palestinian-Iranian conflict, the most Rachel can offer is a white perspective. That is who she is and the privilege she was born into. She is neither Palestinian nor Iranian. If I see Rachel’s story and expect a resolution, or more than her perspective, I am looking in the wrong direction. If at a point we find ourselves imagining, that is not our story to tell.

If I see Rachel’s story as a woman pursuing aid to a cause, then the play becomes a platform to think, to question, who are the right people to conduct this conversation, and get those voices to the head of the table.

“Many people want their voices to be heard,” Rachel wrote, “..I think we need to use some of our privilege as internationals to get those voices heard directly in the US, rather than through the filter of well-meaning internationals such as myself.”

As far as the conversation with my partner, I believe Rachel accomplished what she intended to. If I somehow asked more of her, for instance, to be the face of the Palestinian people, peace, or the conflict, through art or no, I would not only be displacing what I believe she accomplished, but entirely ignoring what I believe other voices are more equipped to speak on.

Toward the end of the show, her life, and journaling, Rachel wrote in detail about the Palestinian pharmacist and his home that she and other ISM members were defending. In 2006, the Rachel Corrie Foundation sponsored the Nasrallah family (the pharmacist’s family), to tour the United States and speak alongside Corrie’s parents. Khaled Nasrallah (pharmacist) spoke to numerous cities about the threats against him, his family, and the current realities of life in the Gaza. This is a leap.

My Name Is Rachel Corrie stayed with me for weeks after the fact. In many ways, I identified with Rachel Corrie’s character. This led me to question the type of audience this show is intended for and the kind of work the show is meaning to accomplish. From its initial conception, what are Rachel’s words being put at the forefront of? By spotlighting her story, what is happening to the stories of the Iranian/Palestinian citizens directly involved?

My Name Is Rachel Corrie showed at The Den Theater, 1331 North Milwaukee Avenue through April 6. More information can be found here, or via email at jacarandacollective@gmail.com.